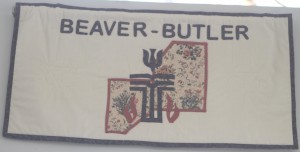 It was in the late 18th and early 19th centuries that emigration into Western Pennsylvania began in earnest with settlers arriving from the middle and eastern counties of the state, and adjacent parts of Maryland, and also from the Carolinas and Virginia. These Irish, Scotch and Scotch-Irish settlers met in the region of which Pittsburgh was the center. Under the guidance of the Synod of Pittsburgh a number of presbyteries were formed including the Presbytery of Erie in 1802 and Allegheny Presbytery in 1821, which was organized in the town of Butler on the first Tuesday of April. At its organization there were seven pastors and five elders, 20 congregations and a membership of 626 communicants.

The history of the Allegheny Presbytery, forerunner of the Butler Presbytery, was one of epoch internal improvement to the infrastructure of the region as roads were opened, round log cabins were succeeded by hewn log cabins, and a brick house or two were constructed in Butler. In 1815 the Presbyterian Church of Butler was built at a cost of $1,500. Throughout the region there were many churches organized by existing congregations known as mother churches.

In the reorganizing of the synods and presbyteries following the reunion of the Old and New School bodies in November of 1869, the Presbytery of Butler was constituted by the Synod of Erie on July 9, 1870, and was declared to be the legal successor of the Presbytery of Allegheny.

The report of the Search Committee that called Dr. Manor also recommended, and the presbytery concurred, that a presbytery office be established reasonably near the geographic center of the presbytery.

The new General Presbyter and staff were settled in an office in the Mellon Bank Building in Zelienople. In 1978, the bank could not renew the lease because of state fire regulations, so in August the office moved to the Butler County News Building on Route 19 just south of Zelienople. And there the office stayed until August of 1981 when it moved again into the basement of the Zelienople Library. In February of 1997, the Presbytery dedicated its current office location at 134 South Main Street, Zelienople, PA.

The presbytery has a Resource Center staffed by a dedicated part-time director, Sidney Fisher, which makes available to the churches a variety of media and hardware for use in the local setting.

In addition the presbytery supports a part-time Youth Director, Diane Mermon, who is available to assist churches with their youth ministries, as well as organizing presbytery youth events.

A new church development called Refreshing Springs Ministry is underway in the Ambridge area led by the Rev. Tega Swann.

The past few years have been difficult for the presbytery with a significant number of churches leaving the denomination. Those that have remained have begun the process of reorganizing its structure so that it may continue to do ministry in the most efficient manner using the limited resources and finances available.

There are currently 63 churches and roughly 80 minister members of the presbytery.