Throughout every General Assembly, much of the real “work” is done in committees. Sitting, listening to advocates and reports, wrestling with both positions and “wordsmithing” amendments, are all the daily activities of a commissioner from Sunday evening through Tuesday (sometimes into the evening). These committees “complete” their work in anticipation of resuming plenary sessions on Wednesday.

While each committee has invested significant time and energy in their overtures they will all be considered, debated and voted upon in the full Assembly (items that were approved by huge margins will initially be listed on the consent agenda and will be approved unless “pulled”).

Just some of the items emerging out of the committees are the following (there are many more):

Each of these items and the others considered by the committees will be taken up in plenary session. No doubt, some of these are areas of greater difference and concern than others. Part of what I try to remember is that when we take collective action in some areas, it is not always (nor should be) a reflection of something upon which we all agree, but rather a commitment to honor the consciences of those among us in particular areas as an expression of collective response. 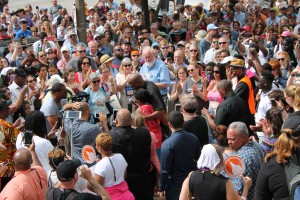 As part of the opening worship service, an offering was received for the specific purpose of addressing the “cash bail bond” system operating within St. Louis. On Tuesday afternoon, a march was organized whereby $47,000 was delivered for the purpose of releasing those who have misdemeanors, but remain incarcerated because of their economic conditions that do not permit them to post bond.

With most committees able to conclude their work by late Tuesday afternoon, the commissioners, delegates and visitors were able to get together for dinner. It was a great opportunity to just debrief and hear about each other’s experiences thus far in this 223rd General Assembly.