GA Misadventures: Announcing that I’d been to a nudist colony to a roomful of Presbyterian elders 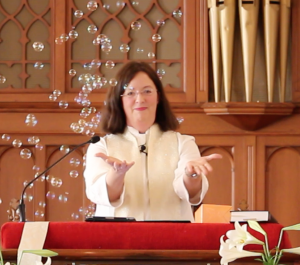 I was assigned to the Bills and Overtures Committee at the 223rd General Assembly (2018). Every time I tell someone my committee, they give me a look that says, “I’m sorry.” Sometimes it’s accompanied by an actual groan.

Our first meeting started out predictably. We all went around and said our names and where we were from. Then we did an icebreaker that involved walking around and asking each other questions. You may have done this if you’ve been to a wedding or baby shower. There are questions like:

If you were a Bible character who would you be? (Pricilla)

What is your favorite thing to do in the summer? (Garden)

What is the weirdest thing you’ve ever eaten? (Thymus)

When we re-gathered as a group around the table, the facilitator asked what is something people don’t know about you?

I announced that I had been to a nudist colony.

My first job out of college was as a radio producer (Remember radio? It’s like Spotify without the internet). Part of my job was to set up remote broadcasts in places that were fun and different. We would broadcast from department store windows to raise money for charity. We’d set up at baseball games. Once we broadcast from a haunted house. And one time we broadcast from a nudist colony. Well, really, it was a camp. People mainly just went on the weekends for recreation. The facility is also the home of the original naked volleyball Super Bowl.

Fully clothed, we rolled up in the bus-sized remote studio. I was very nervous about what would happen, but media personnel learn to keep composure in all kinds of strange situations. It wasn’t a crime scene or riot. It was orderly. And because it was cool that day, it was decent, too. I breathed a sigh of relief when I saw that because of the temperature most people had their clothes on. We did the three-hour show, taking calls and questions and talking to folks about their choices and then packed up and left. It was far less salacious or weird than one might think.

But, announcing I’d been to a nudist colony to a roomful of Presbyterian pastors and elders drew some gasps. I didn’t get much of a chance to explain because we had to move on to business. However, when it came time to hand out the game prizes, the man who answered the most questions in the getting-to-know-you game earned a the chance to pick a free book from the Presbyterian Publishing Corporation. Then, the woman handing out the prizes put the new pastoral edition of the Book of Common Worship in front of me.

“You get this one,” she said laughing. “Because clearly you need more Jesus.”

As we begin to deliberate our business this week, our GA committees will reflect what we bring to them. If we go into them groaning and with low expectations or expecting to fight, chances are the time will be tedious or combative. But if we bring all that we are, our honesty, our past, our humor, our imagination and our love of Jesus, committee time can be holy time. It can be a time of connection, reflection and growth as we do the work of Jesus’ church.

Now, did I ever tell you about the time I ate a thymus by accident?

Sue Washburn is a Teaching Elder Commissioner from the Presbytery of Redstone.