With the opening of the plenary session, greetings were offered by a rabbi and an opening prayer led by an Evangelical Lutheran Church in America pastor. Additionally, the Stated Clerk spoke to the Assembly about the planning and purposes of the March on Tuesday, including addressing questions of its organization and implementation as consonant with the commitment and participation of other protest marches that continue to occur regularly on the streets of St. Louis.

In order to begin the day’s work, financial implications were reviewed for both the per capita budget (OGA) and the mission budget (PMA) based upon the actions of this General Assembly as well as possible future actions in the next couple days. Some questions were raised both yesterday and today about the methods used for calculation of those estimated figures. 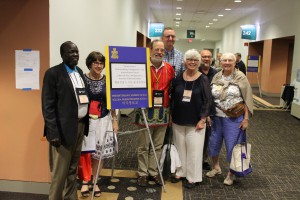 Of special concern to us in Redstone, the chair of the Peacemaking, Immigration and International Issues opened her report by introducing the overture on the South Sudan (09-02). Although it had passed overwhelmingly in committee and it could have been included on the consent agenda, she chose to include it in the action agenda in order to highlight the plight of the South Sudanese people and to publicly educate the gathered Assembly. This overture created and endorsed by Shenango, Redstone and Pittsburgh presbyteries was affirmed with consensus acclamation by a voice vote by the Assembly.

So, the work of the gathered assembly began. Today would be the day that much of the internal issues of denominational structure and future implementation regarding the corporation and shared services would be addressed in the recommendations from the Way Forward Committee. Yet, many other substantial issues would be tackled as well. In summary (based upon the committee recommending), the following reflects most of the actions voted upon today.

-Affirmed by voice the overture on support and prayer for the church the people of South Sudan.

-Endorsed the following affirmation and actions regarding the welfare of our nndeighbors in Honduras, Guatemala, and El Salvador (the Northern Triangle of Central America) and the Welfare of all migrants and refugees in the United States.

-Directed the Advisory Committee on Social Witness Policy to develop a comprehensive study of the current socioeconomic and political in Central America and report its findings and recommendations to the next General Assembly.

-With the Executive Order from the previous day, the Commissioner’s resolution on the policy application of separation of children from families was revised and continued to address issues of indefinite detention and the use of children as either an incentive or deterrent to particular behaviors.

-Approved an alternate resolution from the committee concerning continuing to work toward peaceful resolutions in the Korean peninsula and foster an environment where civil liberties are retained and asylum seekers are treated humanely.

-Affirmed an overture from San Francisco Presbytery recognizing the legacy of Rev. Henry Highland Garnet who was a statesman, abolitionist and pastor (Grace Memorial in Pittsburgh, PA).

-Approved the interim report, including guiding statement with additional comment, of the Vision 2020 Team.

-Affirming the recommendations of the Way Forward Commission with comments, the General Assembly which included the following:

As the afternoon of labor came to a close, commissioners, delegates and even staff were getting a “break” going into the evening with a free opportunity for dinner followed by a concert. Hopefully, everyone will be refreshed for much of the deliberations that will take place through the plenary sessions on the last full day (Friday) of the General Assembly.