Mike Givler, the communications coordinator for the Synod of the Trinity, is attending his first General Assembly of the Presbyterian Church (U.S.A.) in June of 2018 in St. Louis. What follows is a recap of the day’s events, as seen through Mike’s rookie eyes. 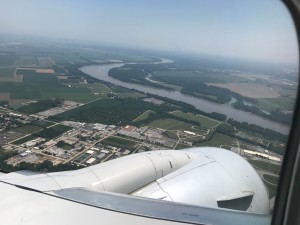 FRIDAY, JUNE 15 – My day began with a quick flight from Harrisburg to Philadelphia, followed by a much longer trip on a larger plane from the City of Brotherly Love to St. Louis. I have never been to Missouri, nor have I have attended GA, so I was excited for this journey. Since the first flight lasted roughly 30 minutes, I’ll spend my time writing about the latter flight.

Both were very smooth on this crystal-clear day and lacked any drama, just like you want in a flight. My seat neighbor to St. Louis was a chatty older fellow wearing a VMI (Virginia Military Institute) hat. I quickly found out he was heading to St. Louis to see his beloved Cardinals take on the Cubs, so I could see some sports conversations coming (perfect for me, a former sports editor of a daily newspaper). However, he kept turning the conversation toward his beloved alma mater (VMI). His love for war history quickly dominated the conversation, as he tried to convince me that VMI alumnus George Marshall (of the famed Marshall Plan of 1948-52) is quite possibly the greatest American who ever lived. He made a compelling argument, but it wasn’t one that I could accurately dispute, so I didn’t try. After all, it was a two-hour, 30-minute flight. 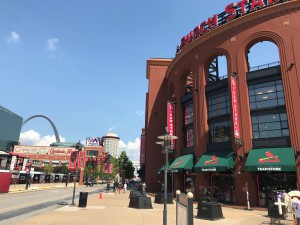 This chatty fellow did try to spin conversations in my direction once he found out why I was flying to St. Louis, reminding me that Confederate Civil War General Stonewall Jackson was a Presbyterian. And when I tried to shift the conversation to sports and specifically the U.S. Open golf tournament that is occurring this weekend, he quickly compared Tiger Woods to David – David sleighed Goliath, becomes king, then commits adultery with Bathsheba that led to his downfall. Pretty good comparison.

I saw several familiar faces from the Synod region in the baggage claim in St. Louis, and we all found the awaiting chartered bus that took us directly to our hotels a welcomed sight. I shared a seat with a bubbly young woman from Syracuse, NY, who I assumed was a YAAD (Young Adult Advisory Delegate) but was in fact a ruling elder from a New Worshiping Community called “Isaiah’s Table.” This was her second GA, having attended her first Assembly four years ago in Detroit as a YAAD. She had tons of energy and I, at 48, tried to shrink down to her age level. I showed her the “Guidebook” app that is recommended for those attending GA, and I think she was impressed. But she blew me away by telling me about the #GApickuplines hashtag on Twitter that will be sure to lighten up any situation during the coming week. 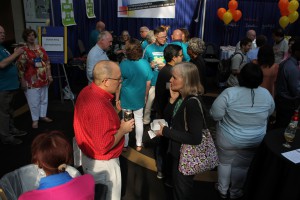 Lunch was had down by Busch Stadium, a short walk that included a great view of the St. Louis Arch. The evening featured a new twist to General Assembly, a three-hour meet-and-greet in the beautiful America’s Center that is across the street from my hotel. The large conference room was packed with people and allowed for the three moderatorial candidate teams to introduce themselves to anyone who walked by. Synod Treasurer Chantal Atnip is one of those candidates and she and her vice moderator Ken Hockenberry spent the entire three hours renewing acquaintances and making new friendships. Saturday is a big day at the Assembly as the moderator for the Assembly will be named. Check back for what promises to be an exciting day at GA as things kick into full gear. 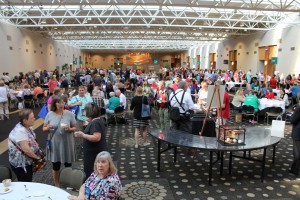