What follows is a report from Pete Wolf, the clerk of session at Shiloh Presbyterian Church in Oxford, PA. 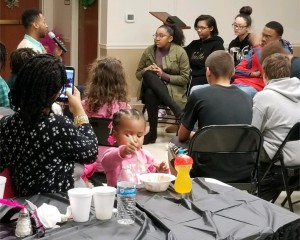 Bringing in guest speakers for things like the MANUP/Stars Achievement program has been key to the African-American male initiatives taking place at Shiloh Presbyterian Church these days.

It has been an exciting 14 months since the kickoff of the African-American male initiative launched on Feb. 16, 2018. The kickoff weekend began with escorting 30 young people and chaperones to a “Red Carpet” premiere of the movie Black Panther. Our session launch was set up for this weekend so the students could experience the release of the “first” film written about a black super hero. We felt this would be a good place to start our dialogue with the young people we would be spending time with. We wanted to capture their thoughts and their feelings about a movie that had so many major characters that looked just like them. This movie was also a first-of-its-kind demonstration in the “comic book world,” which is in some cases similar to our everyday lives – doing YOUR best and caring about others in spite of the obstacles.

On Sunday, Feb. 18, we hosted a four-hour event to include a full-course meal, an open dialogue session on what the students thought about the movie, along with a gifted young college professor from Millersville University who brought the keynote address of the day from the subject of “If you can dream it, you can achieve it.” In attendance we had the males that will be the cornerstone of the initiative going forward, some members of their families and their parents if they were able to attend. We hosted a Sunday meal for the 38 guest attendees, and we explained the purpose of the program, expectations and a high-level outline of the coming events. We invited the young men and their families to attend.

Our first kickoff weekend was awesome in that it had a tremendous impact on the men and their families. Professor Marquis Lupton spoke to these young people, and he brought a powerful message of hope, awareness and faith. They were attentive, engaged and asked awesome questions. We knew they were enjoying the speaker when you could’ve heard a pin drop in the room as the speaker challenged the students to be their best version of themselves.

I mentioned that a nice Sunday meal was provided. Often in African-American households it is around the table at dinner time and/or in the course of a meal that the best exchange between parents and children takes place. We knew that and we wanted to capture that for our first day.

The balance of our calendar was as follows:

March 2018 Activity: A panel discussion around the topic of “Education or BUST”: College – why or why not? The panelists were local college graduates who were male, African-American and grew up in the Oxford community. As we shared at the onset of this process, our initiative was designed to do the following:

To highlight the bright, God-given talent each male child possesses and to shine a light on the element of the male child that is often dimmed by:

April Program: Owning Your Own Business. Guest speaker Khalil Ubquak, graduate of Lehigh University with a degree in business management and a member of the Under-30 Millionaire Club from Baltimore. Kahlil, along with his wife, Kyarra, have been purchasing real estate since their college graduation. Kyarra grew up in Shiloh Presbyterian Church, so we were pleased to have Khalih come to address the young men.

He spoke about “faith” and having dreams, a vision and a direction for your life. He told the young people about working hard to achieve their goals – right now while a student because that is where the process begins. He shared that God sets us up to be A+ people in this world, but we decide if we will rise to our rightful place. The session was well received, and a meal was served.

April: A small group of students attended a Philadelphia 76ers basketball game. This event built the connection among the young people who attended.

June: The group spent the day at Clementine Bridge Amusement Park. This, too, was an awesome relationship builder, an activity where additional trust and unity were being built upon. We also did a college tour at Lincoln University and stopped for refreshments after the visit. We made a decision that the next activity would not be until September due to summer schedules for vacations and families traveling; however, a summer assignment was given.

July: a book reading assignment provided to youth to encourage reading throughout the summer. A special dinner was planned for the time when everyone came back together.

September-October: The young people were involved in some community service activities within the church. Several of the young men washed dishes at church events, assisted with serving at a community member’s funeral and were available to provide assistance at several church-related activities. We believe these activities also helped to fortify the connection within the group.

November: Youth were involved in a community activity and they were able to attend as guests at the Experience the Taste of Oxford “Food Tasting” Event. Some of the youth were able to assist as guest youth chefs for the event. (Again, it was an activity that spoke to increasing the comfort level of attendees while interacting with adults. The concept of working as a team was introduced throughout this event.)

December: The Shiloh family took part in “Adopt a Family” activities, and many of the youth were involved. The concept of giving, even when you may not have much, was introduced. We were able to solicit others to provide gifts for families in need. At the close of this project, 15 families in the surrounding area were blessed with holiday food and/or clothing baskets. The participants were proud of their efforts. 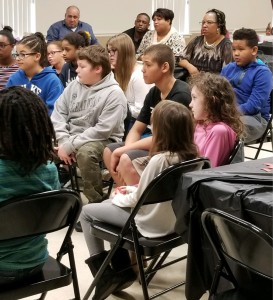 Youth sit at attention during a recent MANUP/Stars Achievement program at Shiloh Church.

February 2019: A money management session was conducted and also information was provided on credit, a topic that we felt a young person would never be too young to hear about. The session was presented by Sean Baylor, a family member of a former NFL player. It was an easy discussion regarding having lots of money at your disposal and what we do that makes sense and what we do in our moments of abundance to make the world a better place. What are you willing to share? Think about what has been given and most importantly what has been promised to you.

April: Students were taken on a college tour to visit southern state colleges in the Maryland/Virginia area. This was a two-day trip culminating with chaperones, parents and students staying in the Virginia area to attend a day-long “High School College Day” at Hampton University in Hampton, VA. During this session we were able to partake in a meal outside of the church facility together in a public venue where we could test the manners and etiquette-type things we had discussed during the preceding months. It is a beautiful thing to see conversations put into practice.

It has been our goal to bridge the gap by providing on-going programming through incorporating some back-to-basics fundamentals, as well as “new” areas that many of the participants may not have been exposed to thus far. In the forefront of our planning for each encounter with the youth we keep the following goals in mind:

This program strategically addresses these issues through a step-by-step integration that will take the male youth from the beginning, making no assumptions about what he does or does not know. The goal will be to present a series of events, sessions and to incorporate some external field trips, and stimulating activities to provide experiences that many of these youth may not have an opportunity to be a part of.

We are excited about this opportunity to sow a seed into the life of our area youth, and we look forward to the wonderful things God has in store for their lives and for our group as we embark on this journey with them.

We have only just begun on things we would like to do with the students. With the funds we have remaining and through additional donations we have received, over the next few months our journey will continue as our students start to approach their freshman-senior years of high school. We have planned the following for the upcoming months:

Additional sessions are also in the works for the following:

This program continues to provide for a strong need within the Oxford Community. There is such an empty space around young African-American males truly seeing the plan God has for their lives. This is an area with very little in the way of formal activities, and you see that often young men will find themselves in trouble, falling into bad behavior in school and often having experiences around laws being broken. But there is a better way, and it takes a program of mentorship like this that includes spending time and showing there is a way out, that there is hope for the future and the plans for their lives are vast and important and will be wonderful. But each young man must do their part in being the best they can be and by following the blueprint God has for their life. These programing hours are well spent in that they help young men to recognize and read the blueprint.