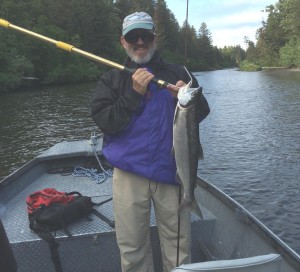 The Rev. Alan Adams had some time for sightseeing and fishing while he and his wife, Carla, served the Yakutat Presbyterian Church in Alaska for six weeks this summer.

The Rev. Alan Adams is the Executive Presbyter serving the Beaver-Butler Presbytery. Made up of 70 churches and around 9,500 members, Beaver-Butler is a mostly rural presbytery serving many small country churches and medium-sized town churches. This has been a blessing for Alan because his call to ministry began with the sense that he was being called to smaller rural churches that struggle to get and keep consistent pastoral leadership.

That’s what made his six weeks serving the Yakutat Presbyterian Church such a meaningful experience. While the Alaskan peninsula is nearly six times the size of Rhode Island, its total population officially numbers about 600. Only ten years ago that population was over 800 but several factors have made it difficult for local residents to remain in the community. First, the community is remote and accessible only by ferry part of the year and by air when weather permits. Second, the population has been decreasing as explained in an article Alan read in a Juneau newspaper while traveling to Yakutat:

“An 800-person population has dwindled in the last few years to 600 or less,” Alan said. “Reasons given were the high cost of fuel oil, reduced logging operations, a scaled down ‘canning’ operation that no longer ‘cans’ but processes fish, which results in many fewer jobs, and the loss of government jobs due to the loss in population (teachers, social services and the like).”

According to Alan, the statistical basis documenting the loss was nearly two years old and word-on-the-street is that a total population of around 500 is probably more accurate today.

After arriving in Yakutat, Alan discovered a village that housed four churches: a Catholic Church, a Mormon Church, an Assemblies of God Church and the Presbyterian Church. It was not long before he realized that the need to continue a Reformed Presbyterian presence in this community was palpable.

The Yakutat Presbyterian Church and manse sit side-by-side in this remote Alaskan peninsula.

The Yakutat Presbyterian Church where Alan and his wife Carla would serve the next six weeks had 10 members in worship on their first Sunday. The only other regular activity at the church was a Wednesday evening beading group that met for fellowship, prayer and crafts. During those six weeks Alan and the session agreed to take advantage of his time among them. As a result, Alan and Carla helped with music at the church, a youth group of four was formed that was also a music group that played their first song in church on his last Sunday, acolyte training was held, session members were installed, two elders were trained to provided communion services when no clergy was available, and work was done to help the Pastor Nominating Committee move forward to find a pastor for the future. The session and Alan worked together to continue the efforts of Northern Lights Presbyterian Church to provide some temporary pastoral leadership and support for the church during this time of transition. Alan also coordinated with the Presbytery to assure that all things were “decent and in order.”

“(God) blessed me in it,” Alan said. “I know this sounds strange because here I am, serving as an Executive Presbyter, but the truth of the matter is, if you had talked to me during my seminary years, I would have told you that I wanted to serve small, remote churches. It’s just where my heart was at the time and it has been good to get back to it. Nevertheless, I believe I was called to my current service — the Lord works in mysterious ways!”

Alan arranged this unique service by contacting several Executive Presbyters around Alaska hoping to get a chance to live out this now-distant call. After connecting with three churches, Yakutat PC emerged as the one where Alan and Carla would serve.

“You go out there with expectations – you get in your mind what you think it will be like – and, really, when I got there it wasn’t all that different from any other small traditional church in our denomination,” Alan said. “It was like a small church out in the country here in Pennsylvania in a lot of ways.”

The need for consistent pastoral leadership became evident. Worship attendance increased by two or three every Sunday for each of the six weeks. On Alan and Carla’s final Sunday at the Yakutat Church there were 23 in worship. 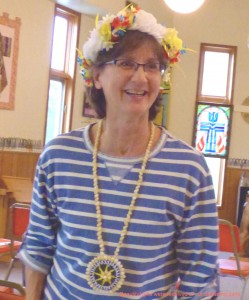 Alan Adams’ wife, Carla, was the beneficiary of some going-away gifts from the congregation at Yakutat Presbyterian Church.

“This is a common issue for remote churches,” Alan remarked. “They need consistent pastoral leaders who are willing to engage the local community. I would say for anybody who’s going to do this, you will need to be comfortable in an unfamiliar culture and community. The way to build a church in that kind of community is to get out and engage the people where they live and you have to do it in a way that’s not judgmental of their culture and traditions. That idea is not unique to the Presbyterian Reformed Church but it’s not generally accepted by all churches either. I happen to think there is a great need in this community for a Presbyterian Reformed presence.”

The community Alan engaged in Yakutat is mostly Native Alaskans. The local population is predominantly of the Tlingit tribe (pronounced Klin-kit), and many of them have been Presbyterian for a long time.

When asked if his time there made any difference, Alan said, “They know the potential to be a church is still there. When you’re without a pastor for a long time and are trying to do service every week without help or training it can become discouraging. The one thing we saw was that there’s no reason this can’t be a viable church. In my opinion, this church should be worshiping with 40-60 people in attendance every week. They just need that consistent and engaged pastoral leadership to work together with them to make it happen.”

“After being so long without a pastor, they were getting discouraged. They even expressed that they may be a little depressed. The question I heard loud and clear was: ‘God, what do we do now?’ God was in our time together for both me and them and I hope for the larger church.”

Because Alan’s time there went so smoothly, the Yakutat Presbyterian Church Session would welcome having other pastors who would like to have a similar sabbatical experience. The thinking is if they could get several pastors lined up, the church could effectively fill its pastoral void during this time of transition. 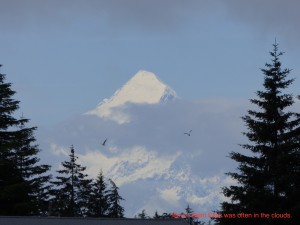 Scenery like this of Mount Saint Elias, which was often in the clouds, was commonplace in Yakutat for Alan and Carla Adams.

In the past, churches like Yakutat PC received financial support from their presbytery to afford pastoral leadership. The presbyteries no longer have the resources to provide that kind of consistent and costly support. Alan says, “A new model to support these churches will need to be developed in the future. There are several places that do ministry like this: In Africa, a clergy person itinerates among several churches; sometimes local leadership is raised up and trained to serve as Commission Ruling Elders; and sometimes the pastors who serve these churches are seen as “Mission Outpost Pastors” who are responsible to raise part of their own support. These are some of the possibilities and challenges that the Northwest Coast Presbytery, in the Synod of Alaska-Northwest, will face in the future.

“I think the ‘mission outpost’ idea would be a viable model for these churches,” Alan said. “It’s something I might like to do my self someday. I can envision a model where a pastor could be there nine months a year – it’s dark 16 -18 hours a day in the winter and that is hard for people who didn’t grow up with it. One could take those months to raise support by traveling to churches who would like to invest in this type of mission. During the nine months at the church a pastor could help and train elders who would lead the church while the pastor is away raising support. I think that might be a decent model for those types of churches. You never know – we’ll see.”

Yakutat is surrounded by mountains and is a temperate rainforest, making it one of the wettest cities in the United States. It averages 150 inches of snow per year but had as much as 450 inches a few years back. The average high temperate in the summer is 60 degrees, while low 20s are commonplace during the winter. 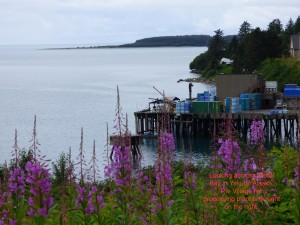 Looking across Monti Bay in Yakutat with the village’s fish processing plant in the foreground.

Most of the people in Yakutat live by subsistence, meaning they get most of their food from their surroundings — they hunt, fish and gather from the land and sea. It led to some interesting meals for the Adamses, like seaweed, herring eggs, salmon-egg caviar, moose and seal. Because of the difficulty in getting things to the area, it can cost $6 for a half-gallon of milk or a liter of soda. When buying groceries, interestingly enough, some things seem to be priced normally — like Chips Ahoy cookies.

There are no traffic lights in Yakutat. Alan, who lived in a manse while in Yakutat, did have access to a vehicle on different occasions but did plenty of hiking and walking to get places. Yakutat has no direct line of sight to a satellite, so internet access is also spotty. At one point he went two weeks without Internet access, making it difficult to update his blog on a regular basis. Alan did get to take in a totem pole rising, a not-too-common occurrence, and helped out at Culture Camp where the children are taught about their culture and how to live the subsistence lifestyle.

Alan and Carla did spend one week following their time in Yakutat touring other parts of Alaska. Alan compared his experience in Yakutat to his arrival in Anchorage by saying, “It’s the difference between looking in an aquarium and getting in an aquarium.” Besides the change from participant to spectator, Alan also said it was somewhat unsettling to be in a city with slightly over 300,000 people after six weeks in a small village with no stop lights.

One day, living in an “aquarium” might be what’s in store for Alan and Carla. Alan, at age 63, looks forward to serving in a rural or remote community again when he retires.

“God reaffirmed my love and call to this unique type of ministry,” Alan said, “and I hope that I may be able to service a community like this as part of my retirement.

“I was blessed by this experience without any question,” Alan concluded. “And I don’t think ministers ever really retire, so I think the whole part of my heart that is really in small, rural ministry says this is something I’m probably going to do in retirement, so I probably will.”