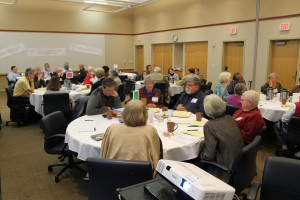 Plenty of discussion and prayer was held in regards to gun violence at the October Synod Assembly Meeting in State College, PA.

A terrible shooting in a Methodist church in Charleston, S.C., left nine dead in mid-June. Nine more lives were taken when a gunman opened fire at a community college in Oregon in early October. In both cases, the tragedies occurred less than a week before the Synod of the Trinity’s Assembly Meetings, leaving those who turned out for the summer and fall triannual gatherings in State College, PA, with heavy hearts and minds that wanted to do something about the ever-increasing recurrence of gun violence.

Prayers and discussions focused on these types of murders, which once again took center stage on Oct. 5-6 at the Penn Stater Conference Center Hotel. There was also a motion passed to give Synod of the Trinity Transitional Executive Susan Faye Wonderland the ability to provide financial support to presbyteries in North and South Carolina to help them recover from the recent flooding that followed Hurricane Joaquin. Along the same lines, an offering was lifted up Monday night for the Peace & Global Witness Offering that was designated for the Syrian Refugee Crisis. Also, Paul Humphreys from the Crestfield Camp and Conference Center spoke in depth about the camp’s upcoming Middle School Retreat, which will focus on stopping bullying that sometimes leads to suicide. While there were discussions regarding Synod business such as installing a new moderator, the budget and Mid-Council realignment, the underlying tone of the meeting dealt with issues facing this country.

The tone for the meeting was set Monday morning when outgoing Synod Moderator Barbara Chaapel (Philadelphia) opened with a prayer directed at those affected by the shootings in Oregon as well as those dealing with flooding in the Carolinas. William Netting (Donegal) concluded the morning portion of the meeting with a prayer that said, “Despite all of the rain in South Carolina, there is a rainbow.” In between, commissioner stoles were blessed and distributed to those in attendance. A backdrop for the meeting was the talented musical duo of the Rev. Dr. Sheldon Sorge (Pittsburgh) on piano and the Rev. Dr. Wilson Gunn (General Presbyter at National Capital Presbytery in Rockville, MD) on base, a twosome that calls itself “Executive Session.” 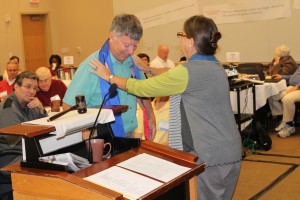 Outgoing Moderator Barbara Chaapel puts a commissioner stole around the neck of Gary Lyon during a ceremony Monday morning.

Monday afternoon’s portion of the meeting began with a video clip from the 2015 Emmy Awards by Viola Davis, who became the first African-American woman to win in the Best Actress in a Drama category. She said in her emotional acceptance speech that, “the only thing that separates women of color from anyone else is opportunity. You cannot win an Emmy for roles that are simply not there.” It led into group discussions centered on the Synod’s secondary end of “Fostering conversation and action for the promotion of social righteousness” and thoughts on “privilege.” William Knudsen (Northumberland) recalled a story about a photographer who took pictures of black children and then of white children, but the latter photos did not have any detail in the white kids’ faces. He added that “Privilege is having the aperture always set on you.”

The afternoon session also included the election of Johnnie Monroe (Pittsburgh) to Synod Moderator and Kathleen Sillman to the Vice-Moderator positions, who were later installed into those rolls. Johnnie had been the Vice-Moderator. Connie Quinn (Upper Ohio Valley) was also elected to fill a vacancy on the Governing Commission while Jean Kennedy (Pittsburgh) remained on the Nominating Committee and will be joined by new members John Bolt (West Virginia) and William Netting (Donegal). It was also agreed that the past Moderator – in this case Barbara Chaapel – shall be an ex-officio member of the Governing Commission. 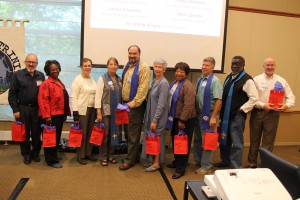 The Executive Advisory Team was recognized for their work during the Synod’s shift to Policy Governance.

Transitional Executive Susan Faye Wonderland spoke briefly about the direction the Synod is moving, saying that the Synod’s upcoming 300th anniversary celebration is “one that pushes us into the future.” She then recognized the Executive Advisory Team, the Synod staff and Consultant Philip Bergey for their continued hard work as the Synod continues its transition into a Policy Governance ruling model. Synod Treasurer Chantal Atnip was also re-elected for a five-year term.

Doug Portz, a commissioner from Pittsburgh who is now a Regional Representative at the Board of Pensions, informed the group about the Board’s redesign plan that is in the works for 2016. The idea behind the redesign is to construct one plan that has a menu of options to suit each individual person. He said, employers “can choose to provide employees, both lay and non-mandated teaching elders, with coverage identical to installed pastors, or they can select several benefits to offer, depending on what works for them.” More details will become available through the Board of Pensions as they are finalized.

A report from the Governing Commission followed and included a three-part summary from the first meeting of the team in mid-September. The common point made was that the group was able to come together as one at that meeting and began to dig its heels into the work. David Leslie (Washington) was so impressed with how the Governing Commission is structured that he asked “where has this been before?” Harry Johns (Lake Erie) added that everyone is “very much dedicated to the success of the Synod of the Trinity.” The ends, or goals, listed in the Policy Governance Manuel were displayed around the conference room for everyone to see and digest throughout the two-day meeting. 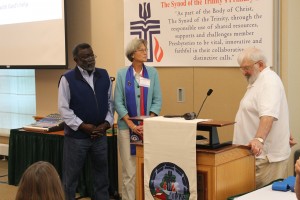 Monday evening included more table conversations centered on gun violence. It was agreed that discussions about this disturbing trend need to be had in churches and shared by commissioners in their presbyteries. One comment was that the gun-violence issue “looks different in rural hunting communities than in urban communities.” The day concluded with a sermon by Kathleen Sillman, who asked “Are We There Yet?” (Read sermon here.) She answered the question by saying that in this time of change into Policy Governance in the Synod that “Well, we do know this – we have each been called by God to be right here in this place and time. God knows we are enough.”

Tuesday, the Synod’s Mid-Council Task Group spoke on the General Assembly’s recommendation that the number of synods in the United States be reduced from 16 to 10-12. With each synod asked to look at their own situation, the Task Group reported that it believes the Synod of the Trinity’s boundaries should not be changed in part because this synod is already one of the largest in the country. The Synod is, however, open to boundaries that are “more porous and easier to navigate for the purposes of more effective mission and ministry.” The report was approved by a unanimous vote. A meeting in Dallas is scheduled for later this fall for all of the synods to discuss the realignment mandate. 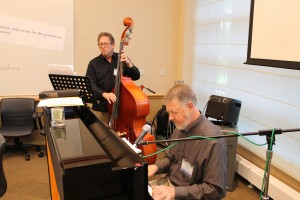 “Executive Session,” consisting of Wilson Gunn on base and Sheldon Sorge on piano, graced the meeting with music throughout the two-day event.

Before the meeting came to a close, it was noted that the per capita giving of $2.30 will not change for 2017. Action was made on per capita for 2017 because there is only one Synod Assembly Meeting scheduled for 2016 and that will not occur until October.