When many people think of church camps, they think of a place where youth go during the summer months to make friends with other kids their age, sleep in air condition-less cabins and enjoy outdoor activities like swimming, archery and maybe even horseback riding all under the umbrella of building their faith. While that is most certainly true of Crestfield Camp and Conference Center in Slippery Rock, PA, the Pittsburgh Presbytery camp is also in the business of educating campers – both young and old — about issues of the day. 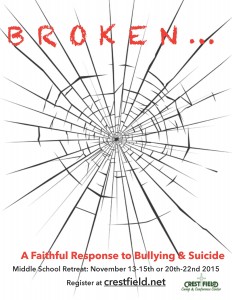 That is true again this fall as Crestfield is helping to put on programs aimed at both adults and youth who are seeking guidance in different areas of their lives. One of them is a middle school retreat with the focus on “Broken: A Faithful Response to Bullying and Suicide” during consecutive weekends in November. The first one will be Nov. 13-15 followed by the second one on Nov. 20-22, with both starting at 7 p.m. on Friday night and running through approximately 10:30 a.m. Sunday. Open to children in grades 6-8, the cost for this program is between $100-$110 depending on the lodging option that is selected.

While Crestfield is also hosting a Senior Adult Day, a Senior Adult Retreat and a Quilting Retreat before the year is over, it’s the middle school program that is generating plenty of excitement around the camp this fall. Unfortunately, these days bullying and suicide are going hand-in-hand. Trying to prevent both is where the November three-day weekend programs at Crestfield come in.

“The two go hand-in-hand, but not always,” said Paul Humphreys, the Disciplemaking Program Director for Outreach at the camp. “Bullying does not always lead to suicide. For us, it’s a matter of the churches playing catch-up for many years and we need to respond in a healthy way. The phrase that I have been using is that it’s an opportunity for the church to be the fence at the top of the cliff rather than the ambulance at the bottom of it. We need to faithfully and proactively respond to the challenge of bullying and suicide.”

Some people think the presence of social media like Snapchat and Facebook make it easier for people to be bullied because they are more easily accessible. While that’s true, those forms of media also allow for another surprising thought.

“Most death by suicide is because of a loss of hope and a lack of a caring, supportive community around them,” Paul said. “Even though we’re now more connected with media and through the Internet, statistics are showing we’re more lonely than ever in history. We can connect with people on some platform or social media but there’s a lot of holes in that platform. Good old-fashioned face-to-face talking and listening to one another isn’t completely removed but it’s almost like it’s dying out.”

Rather than approaching this subject from the normal way of doing a retreat, Paul said this program will recognize that there are several different ways people are relating to bullying and suicide — they either know someone who has been affected by it or they have been bullied or have contemplated suicide.

“Over the course of the weekend we’re offering several workshops and we’re going to literally let the youth decide which ones they go to,” Paul explained. “We’re going to repeat this several times so they have choices and they can start figuring out what’s best for them.”

The seminar will include a summary of what was covered over the weekend to be taken home with the youth for them to continue and also for the parents to review. “It will offer solutions for the parents and youth beyond the weekend,” Paul said. “It’s not just a one-and-done thing.”

Michelle Snyder, the Executive Director of the Pittsburgh Pastoral Institute, will be the keynote speaker for the program, and trained counselors will be available on site for any of the youth to reach out to during the weekend.

“We don’t want this to just look like some workshop where you just go through the motions,” Paul said. “It needs to have a spiritual element, which is why we are calling it ‘Broken: A Faithful Response to…’”

Paul is expecting close to 200 youth to turn out during the two-weekend event, which Betty admitted is a “riskier topic than the ‘Jesus Loves You’ kind of topic, but it’s something that’s contextual. Our ministry needs to be relevant and contextual. Statistics on this are climbing and climbing and climbing, and we really need as the church to step into the gap.”

Helping to fill in the blanks is what both the volunteering workshop and bullying/suicide program are all about. And even though they don’t seem related on the surface, they in fact are.

“The intent of the volunteers is to say it’s hard to develop relationships, but that’s what Jesus calls us to do,” said Betty Angelini, the Executive Director at Crestfield. “So then we want the kids to have the sense of that so that when they are having challenges, they (the volunteers) are someone they can reach out to and talk to and be with and some ministry of presence can happen.”

Note: For more information on any of the programs being offered at Crestfield Camp and Conference Center, click here.