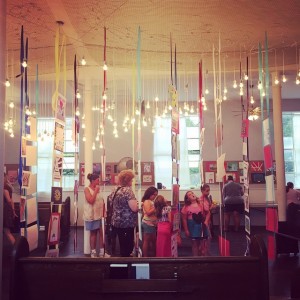 Beacon Church, shown filled during a summer art show, became chartered through the Presbytery of Philadelphia in November of 2015.

It had been 17 years since the Presbytery of Philadelphia chartered a new congregation. That makes what happened on Nov. 17, 2015 fairly rare. Fitting, because what Beacon is doing is also very unique.

Located in the Philadelphia neighborhood of Kensington, Beacon Church worships on Sunday evenings and invites area children throughout the week for Art Studio and Story Studio, their art and creative writing programs. In a building that has housed Presbyterian worshipers since 1871, the newly-chartered Beacon is led by Co-Pastors Revs. Karen Rohrer and Rebecca Blake, who were both trained at Philadelphia’s Broad Street Ministry. Through a partnership with the presbytery, Broad Street Ministry and the former Beacon Presbyterian Church, Karen and Rebecca were invited to dream alongside the community for the revisioning of the 140-year-old church into a faith community and gathering space for neighbors of all ages in 2011.

Within six months of their start, Beacon became part of the New Church Development and began to steadily grow. Karen and Rebecca have replaced the traditional Sunday morning worship time slot with a Sunday evening service that has seen the church’s attendance double. They also pull in between 30-40 youths, mostly between the ages of 5-12, for their three weekday afternoon workshops. 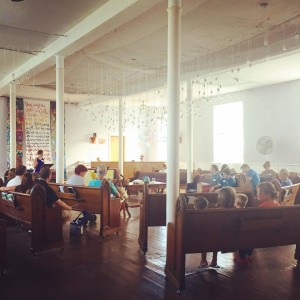 This is the scene during summer worship on a Sunday evening at Beacon.

With all of Beacon’s numbers on the rise and congregational leaders bubbling up, Karen, Rebecca and the congregation discerned it was time to take the step to formally charter. As a chartered church, Beacon now has its own session with five elders – four of whom had not been ordained before. Karen feels their leadership will allow for even greater things to happen in Kensington.

“This frees us up to do the self-governing piece and have our folks feel the ownership of that,” Karen said. “And to say to the Presbyterian Church, ‘You have given us a lot to go on, and we want to chart a way forward that enables more and more folks to do this, particularly in neighborhoods that are underserved, to create a different kind of chartering so that people can feel like it is possible to have a church in a community like ours.’”

At the top of the “positives” list for being chartered is that Beacon now has its own session or leadership board. In the past, an administrative commission of the presbytery filled that leadership role.

To read more about the Presbytery of Philadelphia’s desire to issue Beacon Church a charter, click here.

“Having two staff people meant that the structure for really getting people involved and empowering people to do their own work within the church system got kind of clunky,” Karen admitted. “We weren’t able to empower people as quickly as we would be able to with a session that had control. So part of it was getting governance back into the hands of the people who worship here every Sunday.”

Creating things like a mission statement and determining core values were front and center at the first couple of session meetings. It generated some energy that Karen feels will go a long way during Beacon’s infancy stage as a chartered congregation. 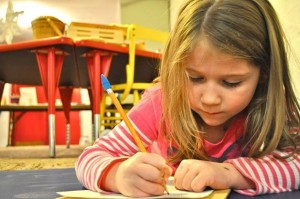 A young girl works on a writing project at Beacon.

“It allowed our folks to get a taste of what it means to not just govern but to think through the responsibility of leading and seeing their role as discipleship leaders, not just directors of an office,” she said. “It was powerful to watch them own that, step into those waters and be ready to do that.”

Among the early goals the session has discussed is opening Beacon to the surrounding community as well as groups within the Presbytery of Philadelphia. Beacon wants to open its doors to those entities so that they, too, can experience worship in Beacon’s unique context.

“The big focus is deepening our roots in the neighborhood and doing life with folks around the church,” Karen said. “Doing more work to get our name out there to invite folks in and to make connections with people beyond the church in the community.”

However, drawing 100 percent of the budget from tithing is not something Karen sees Beacon doing anytime soon. Because of the economic fabric of Kensington, “even if everyone tithed, it’s financially not possible,” she said. But, through church partnerships and because of the secular teaching that is done during the week, Beacon is able to apply for grants, money that helps pay her and Rebecca’s salaries and cover after-school program costs. 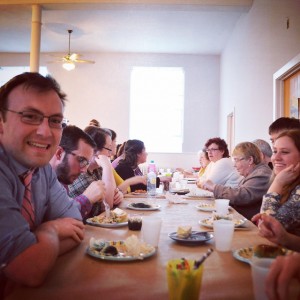 The table is full for Easter dinner at Beacon.

These changes that allow Beacon to stand on its own are just a couple of the things that have created a new feeling around Beacon, even if the shift to being chartered isn’t immediately felt by someone who walks in the front door.

“I’m surprised that it does feel different,” Karen said. “I didn’t think that it would feel that different immediately.”

The journey for Karen and Rebecca, who were both ordained to their work here, has been uplifting to say the least. To be able to take this next big step and get Beacon chartered has been nothing short of miraculous.

“I feel like with that first session meeting, I remembered that it was possible to actually get where we said we were going this whole time,” Karen said. “As we were churning away and getting stuff done, I sort of forgot that ultimately we were going to this place where brand-new elders, many of whom had never been in a church leadership position before, are ready to lead a church. It’s happening, they’re doing it and they’re great at it.

“I’m very struck by God’s faithfulness in the whole thing. It’s not like we finally got to the Promised Land. It’s like we were working away the whole time, whether or not that mattered, and the Promised Land just kind of showed up on our doorstep.”