Trip to Africa brings changes to Malawians and mission team 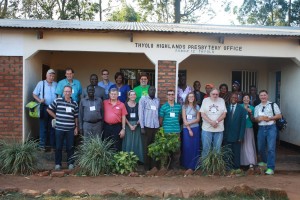 The mission team from Pittsburgh and Beaver-Butler Presbyteries gathers at the office of Thyolo Highlands Presbytery in the mountains of southcentral Malawi. The group includes the Malawian host team, South Sudan team, Pittsburgh team and several of the presbytery office staff members.

Gregg Hartung and a dozen other people affiliated with churches in the Pittsburgh and Beaver-Butler Presbyteries have settled back into their lives following a nearly two-week mission trip to Malawi, Africa, in July. They have all resumed their roles as pastors, elders and church volunteers while having a trip that was beneficial – both to them and those whose lives they touched in Malawi — in their memory banks. But what now?

“Why do I feel that I’m just going through the motions of being alive here since coming back from Africa?” Gregg admitted. “Am I depressed? I continue to sort out my feelings of wanting to help but it is not the give-money kind of solution. I think there has already been too much money that will solve the problems of the developing world being just a way to deal with something we don’t understand or try and understand on a deeper level. No matter how good or great we think we are there are a variety of things we miss or have lost along the way that Malawi and other parts of Africa can teach us.”

This is the challenge Gregg and others in his group are now facing. The trip has raised questions within themselves about the best way to continue serving others and, of course, the Lord.

“I have been encouraged upon my return to look for ways to build and enhance partnerships here and to help people in my own pews see just how small the world is becoming,” said the Rev. Dave Carver of Crafton Heights Presbyterian Church in Pittsburgh. “These trips give my preaching a grounding in the real world and allow me to consider the word in the context of the whole world, not just my neighborhood. In fact, every week I write the first draft of my sermon with a wooden pen that was hand-carved in Malawi. It features the African Fish Eagle, the national bird of both Malawi and South Sudan. As I write, I am challenged to remember that our worship here in Pittsburgh has got to be a blessing to the whole world. I am not free to simply pay attention to my own backyard.” 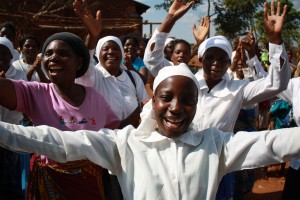 A crowd at the Gondwa Prayer House welcomes the Pittsburgh and South Sudan team members to their church. The women with the head covers are members of the Women’s Guild at the prayer house.

All told, 10 churches from Pittsburgh and Beaver-Butler were represented in the trip by the 13 trip-goers. There were also three people from South Sudan who joined the group in Malawi and were part of the mission trip to complete the tripartite.

“I have been privileged to travel to Malawi many times in the past 20 years,” Rev. Carver said. “This most recent trip was exhilarating in that it was an opportunity to watch the burgeoning partnership between the Church of Central Africa: Presbyterian connect more deeply with the South Sudan Presbyterian Evangelical Church. Although Pittsburgh Presbytery and CCAP Blantyre Synod have been engaged in a relationship for 24 years, only two years ago was the scope of that relationship widened to include Christians from SSPEC and the world’s newest country. Since I was a part of the team that originally conceived that tripartite arrangement, it gave me great joy to see how the Malawians and South Sudanese have been yearning to build on it.”

As part of the trip, the travelers were matched up with their sister churches and spent the last four-five days of their time in Africa visiting and experiencing life with those partner congregations. Gregg is a member at Crestview Community Church in Callery, PA, which is in the Beaver-Butler Presbytery. Since it has a sister church in Africa (Chiphoola Presbyterian Church), and since the Pittsburgh Presbytery is also connected to African congregations, Gregg and his pastor (the Rev. Bob Goossen) asked to be included with the Pittsburgh Presbytery team on its journey to Malawi.

“The first part of the trip was basically to orient us with the Synod of Blantyre,” said Gregg, who doubles as the Executive Director of Presbyterian Media Mission. “They had a team of people from the Synod who planned out a schedule for us to get a cross-section of Presbyterian experience in Malawi and give us a bigger overview of the ministry going on in the Synod.

“We wanted to reconnect with our partner church because even though we occasionally get letters and maybe an email, it’s not like being with somebody for a while. We’ve had two or three exchanges in over the 10 years we’ve been partners with Chiphoola Church and it was our turn to have two or three people go to them. They were here last.” 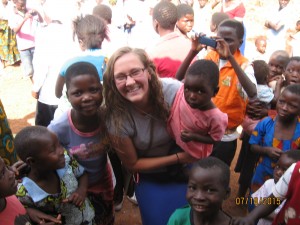 Sarajane Gracey from Sunset Hills Presbyterian Church in Pittsburgh is greeted by children at the Gondwa Prayer House in Malawi.

Also, because the Chiphoola Church has pastors who are re-assigned to a different church every three-four years, Crestview Church hadn’t connected directly with Chiphoola’s new pastor since he came on board, the Rev. W.W. Mikondo.

“The pastor that was there when we started our partnership is now gone to another church,” Gregg explained. “We were re-establishing our partnership with a new minister that we never really met face to face. It’s really hard even with pictures and video to actually have people feel what you felt when we met the people and lived with them. There’s nothing to replace being there. That’s what Pastor Bob and I hoped to have happen is the two of us would bring back things to help Crestview understand that our partnership remains strong. Things are happening through God that are way beyond what either church imagined when we started this relationship 10 years ago.”

Another goal of the trip, which was partially funded by a Synod of the Trinity Peacemaking Grant, for Gregg and Pastor Bob was to see how Crestview’s mission support is used by Chiphoola. A Saturday Feeding Program was started by the church through Crestview’s continued support that began 10 years ago and the two were able to experience that mission firsthand.

“A lot of the very poor in that community have a rough time getting complete meals each and every day,” Gregg said. “On Saturday, the church has an outdoor kitchen and the women from the community come and cook food that the church provides. During winter break from school, 80 to 90 kids stand in a line and get food served to them. Some of the kids sit down and eat it right there and other kids take the plates and disappear into the village. Typically they are getting food for other siblings and family that need fed.”

Gregg was asked by one of the Malawians during a Bible study if there are poor people in the United States. The question arose because on the occasions where they get to view American television, everyone seems to be living in the upper middle class and “have everything they need.” 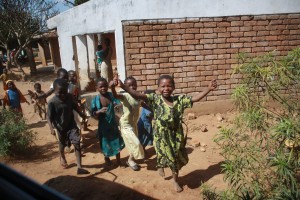 Children welcome the mission team’s arrival as they see the team through the bus window as they enter into the village.

“I said there’s churches in the Pittsburgh area that actually have food banks, who actually provide ‘Produce to People,’ which is very similar to the Saturday Feeding Program, for people in our community,” Gregg recalled. “And they were shocked. The woman said, ‘Are you telling me the truth?’ I said, Jesus said, ‘The poor will always be with you.’ There’s always needs that need to be met. Maybe the things we have in common are daily needs that need to be met and how we go about getting those needs met. Even though you hear that the United States has streets of gold, we have issues, too.

“We have misconceptions of them like they do of us. They are very intelligent. They’re not natives running around in the jungle. They have concerns about theology. They’re a lot more conservative than the Presbyterian Church (U.S.A.) is, but they struggle just like us with what God is asking us to be and do today.”

Among the most memorable moments during the trip was taking in an ordination of three pastors that drew close to 1,000 people. Rev. Carver was asked to preach the sermon during the ceremony. It was just one of many truly unique experiences that the group experienced while attending worship services in Africa.

“I was deeply moved by the passion for Christ and the dedication of the clergy and the laity in the Malawi church,” said the Rev. John Hamilton of Bethany Presbyterian Church in Bridgeville. “It starts with a joyful hospitality that is contagious and unmistakable. It flows into a joy in simply having us come and be with the people of the churches. It expresses itself in worship, which is an act of the whole church: multiple choirs representing youth or children or the Women’s Guild or men or a mixed group. And it is practiced in ministries of food, education, children and families, and evangelism. I came back with a deeper sense of what the church can be when we lay aside our personal and political agendas and start with a passion for proclaiming Christ and practicing his love.”

Another special event for Gregg occurred when he attended a funeral for a veteran of both World Wars who was 101 years old. The entire village came out to honor the man, and at the end of the three-plus-hour service nearly everyone in the community threw a shovel of dirt in the grave where the casket was buried.

Gregg and the group also assisted in several mission projects while they were in Malawi. At the Chiphoola Church, Gregg helped with some painting for a construction project that included the addition of two wings, a meeting room, and a pastor’s study. Meanwhile, Bob took some of the youth from the church to a nearby prison to minister there.

Also at Chiphoola, Bob preached a Sunday sermon with the help of an interpreter that was part of a service that lasted four hours, included a baptism of 11 adults and 22 infants and featured six different choirs and a children’s message with close to 70 children present. It was just one of several experiences that will allow Gregg and the others to look more closely at the way they do things.

“When you have a four-hour worship service on Sunday morning you’re amazed because people are sitting on dirt floors and not padded pew seats,” Gregg said. “And how they deal with time. Time is not as much an issue in Africa. They kept saying, ‘You look at your watch too much.’ We’re so time conscious that we’d rather give money to things than volunteer our time because our time is really that precious to us. They have a hard time conceiving that when it is all about relationships there.

“They’re poor but happy! The materialism that we have doesn’t answer our spiritual needs. Some of those things I think God opened up insights to our lives. … It became obvious to me that Malawians, even though they are among the poorest countries in the world, have much joy in terms of how they approach life, how they have faith in Jesus Christ. For Malawians, it’s Jesus first, others second and yourself last. And that’s joy – J-O-Y.”