Horse hooves clacking on the road outside as people filter into a sanctuary that is streaming with light through nine colorful stained-glass windows. A pump organ belting out notes as a woodstove sits in the corner of the church ready to pour heat over the congregation. 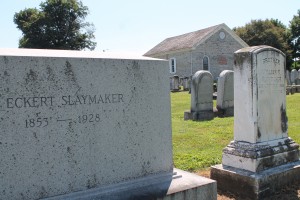 The Slaymaker surname is the only one from its beginnings in 1740 still in the area of Old Leacock Presbyterian Church near Intercourse, PA.

While this imagery might spring to mind an 18th or 19th century church setting in any rural area throughout Pennsylvania, West Virginia or Ohio, it is in fact portraying a regular occurrence at Old Leacock Presbyterian Church in Lancaster County, PA. Located in the heart of Amish Country near the village of Intercourse, the Old Leacock church building that is over 260 years old still houses weekly summer services and annual worship on the eves of Thanksgiving and Christmas plus Easter morning.

The summer of 2015 has brought even more meaning to Old Leacock PC as it represents 275 years since the congregation was established and became affiliated with the Presbyterian Church in 1740. The church body has since moved about two miles down the road into Paradise where it is now simply called Leacock Presbyterian Church.

To celebrate the milestone anniversary, Old Leacock church was open to the public on the first Wednesday of the month this summer, allowing members and curious passers-by a chance to walk inside this historic building and step back in time with a personal tour around the church’s grounds. The Rev. Robert Birch admits he can sense the history that’s in the church when he preaches there.

“I do honestly feel in the presence of a cloud of witnesses,” he said. “I think anybody feels that in a church that is spirit-filled, but I’m more conscious of all the lives that have gone into making Leacock Presbyterian Church from the Revolution to the Civil War to the Depression. You can almost envision the stream of human beings that have contributed to the building of the church in that place. I definitely feel connected to the spiritual history of the church in that old church.” 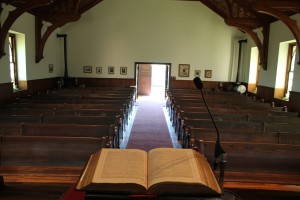 Rev. Robert Birch says he can “envision the stream of human beings that have contributed to the building of the church in that place” when he preaches at Old Leacock.

That fact that the building and the congregation that worships in it has been able to survive 275 years also speaks to the commitment level of the faithful worshipers.

“These are people who persevere,” said Rev. Birch, who has been in the Leacock pulpit for eight years. “They have a strength of character and a strength of spirituality and faith that is very impressive. These are people who see things through and make things happen. It starts with a genuine faith commitment to the Lord they worship and an honoring of those who have gone before.”

Christian “Skip” Brackbill Jr. was the knowledgeable tour guide in August who recounted the history of both the congregation and the Old Leacock building as best he knows. He admitted that some of the early history has been lost due to less-than-ideal record-keeping.

“An awful lot of the history was oral history for the first 100 years,” Skip said.

With that in mind, records show that Scotch-Irish families settled in the Leacock area in the early 1700s. As deemed necessary by the Presbyterian governing body of that time, those settlers were forced to worship about 10 miles down the road at Pequea Presbyterian Church. As the amount of people living near Leacock increased, so did a worshiping body that felt it was time to start its own Presbyterian church there.

By 1738, this group approached what was at the time known as the Synod of Philadelphia to request the start of its own congregation. The Synod initially denied the request, saying it was too close to Pequea PC to have its own church. The following year the Leacock group again asked to begin its own church, and this time the Synod said it would form a committee to look into the request. But the committee was never established, and in 1740 when the Leacock group asked for a third time to start its own Presbyterian church, the Synod finally agreed and made it part of the Presbytery of New Castle. 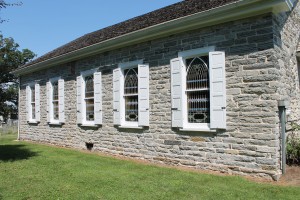 The south side of the church includes five stained-glass windows and the best stone masonry Old Leacock church had because that side faced the Philadelphia Turnpike and the church wanted its best side to face the traffic. The road was eventually moved to the other side of the building.

A log church was built on the property about 10 years later before a church member traveled to Ireland and recruited 12 young builders to return with him to Pennsylvania and construct a church. By 1754, a one-room stone structure was built – one that was identical to a church they knew in Northern Ireland – and it was called Leacock Presbyterian Church.

One of the church’s most influential pastors stepped onto the stage shortly after the building was constructed. John Woodhull accepted the call to serve the Leacock church in 1769, and while he preached for 56 years, he was known as a patriot, too. John, who was also the moderator of the third General Assembly in 1791, fought in the Revolutionary War with George Washington at Valley Forge and as the story goes even helped fire a cannon at the Battle of Monmouth.

One of John’s infant sons passed away while John was with Washington, and that tombstone is among the oldest in the cemetery that surrounds the Old Leacock building today. The cemetery also includes a veteran from each of the United States’ battles from the Revolutionary War to World War II. Burials are still being held there, too.

By 1840, the Old Leacock Church became too small and it was decided that another church be built two miles down the road in Paradise, which is the current building that houses Leacock Presbyterian Church. The Old Leacock building continued to be used and was renovated in 1903 at which time a pump organ was installed with a one-year guarantee. Some 112 years later, that organ still functions for services and hymn sings in a building that is well over twice its age. 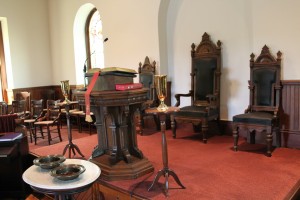 A view of the front of the church and the choir loft at Old Leacock PC in Lancaster County, PA.

“The commitment to maintain the old church has a lot to do with the commitment the folks of this congregation throughout history have had to preserve it and maintain their history, their church, their roots,” Rev. Birch said. “It would have been very easy to have gotten rid of that old church and it probably would have been very economical but they didn’t.”

A final renovation occurred in 1964 around the same time heat and electricity were installed. Those utilities come in handy for the 8 a.m. services that are held at Old Leacock each Sunday from June to Labor Day weekend. Attendance averages around 30 at those services, which are followed by regular 10:30 a.m. worship times at the current church in Paradise.

Aside from the Thanksgiving eve and 11 p.m. candlelight Christmas Eve services, a powerful worship occurs on the morning of Easter every year at Old Leacock.

“It’s held in the courtyard of Old Leacock and the congregation faces east and I face them,” Rev. Birch said. “So as we do our service, they are actually watching the sun rise, which can be very, very powerful.”

There are also community hymn sings on the first Sundays of the month from May to September that draw as many as 125 people. At the request of the singers, a free-will offering is given, with the money donated to local mission work.

And every year on the second Sunday in September, Old Leacock Day is held at the building and it includes a picnic following the worship service, similar to the way worship was held there over 250 years ago. With the way the old stone building has been preserved, it’s not hard to imagine that time from long ago while sitting in the old wooden pews listening to a century-old pump organ.