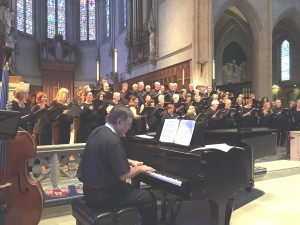 The Rev. Bill Carter plays the piano during a re-creation of Vince Guaraldi’s “Jazz Mass” at Grace Cathedral in San Francisco. The same music was performed on Labor Day Sunday, Sept. 6, at First Presbyterian Church in Clarks Summit, PA.

Twenty-four years ago, the Rev. Bill Carter was trying to figure out a way to give his organist a day off during the Labor Day weekend. Unable to find a substitute organ player – and also figuring that attendance would be light on this holiday Sunday – Bill, a talented jazz keyboardist, was urged to spice up the service a little bit by playing some of his music during the service.

“We thought, ‘How dangerous would it be if the pastor played the hymns?’” he said, recalling a conversation with his worship committee at First Presbyterian Church in Clarks Summit, PA. “No one’s going to be there anyway – it’s a holiday weekend. Then they asked if I would jazz it up and I said I suppose I could. A press release went out and it was standing-room only.”

And on that day an annual Labor Day Sunday morning jazz communion was born. Also, the foundation for the “Bill Carter and the Presbybop Quartet” was formed, a group of musicians that tours the area and various parts of the country performing concerts and jazz worship services in churches. While they play between 20-30 times a year anywhere from Florida to the Midwest and have recorded 10 CDs, members of Presbybop were involved in undoubtedly one of their most prestigious performances this Labor Day weekend.

On Sunday, Sept. 6, Bill and his quartet along with two lead singers and the First PC choir performed Vince Guaraldi’s historic “Jazz Mass.” In 1965, San Francisco-based pianist Guaraldi made history when he composed and performed the first “Jazz Mass” in a worship service in the United States. At the time, jazz was considered “the devil’s music” by many religious conservatives, and the music had never been part of a church service.

“Vince did something that was groundbreaking,” Bill admitted. “He brought his jazz tradition to the music that had already been part of the church and it was quite controversial at the time.” 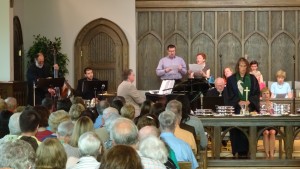 Synod of the Trinity Transitional Executive Susan Faye Wonderland reads the liturgy prior to the Jazz Mass at First PC in Clarks Summit on Sept. 6.

Realizing that this year marks the 50th anniversary of that famed service in San Francisco, Bill began transcribing Guaraldi’s portions of the music from the Jazz Mass. Access to the actual music played in 1965 was not available so Bill listened to the available albums and wrote down what he heard in order to have a script to follow. Guaraldi, who was more famous for composing music that appeared in the “Peanuts” cartoon television specials, was known for never playing the music the same way twice and for never writing the music down.

“When Guaraldi put the music together, the 60-voice choir basically sang out of the prayer book and the hymnal,” Bill said. “It was organized but it was originally improvised. Nothing had been written down. The musical problem was I decided to do this but there was no access to any actual music. Since March I’ve been kind of pecking away at it at night, listening to a recording and then putting the notes and the melody and the arrangement on paper.

“It was an extraordinary piece,” Bill continued, adding that the “Jazz Mass” hasn’t been played since 1971. “They took the music out of the 1940 Episcopal hymnal and set it to bossa nova music. The vocal music was running parallel to the jazz.”

Bill contacted a friend, Jim Martinez, from Sacramento about his project. Jim had recorded tribute albums of Guaraldi’s music and was so thrilled with Bill’s idea that he planned a 50th anniversary concert of the “Jazz Mass” at the original site — Grace Cathedral in San Francisco — on Aug. 15 and invited Bill to speak and play at the event.

“It was great,” Bill admitted. “I preached a little bit. I got to meet three or four people who were in the original choir that sang the mass. They were children at the time from the children’s choir.” 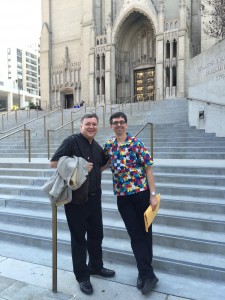 The Rev. Bill Carter (left) stands with Vince Guaraldi biographer Derrick Bang on the steps of Grace Cathedral in San Francisco. Derrick spoke prior to the “Jazz Mass” performance in Clarks Summit on Sept. 6.

That same program was at First PC of Clarks Summit on Sept. 6. The program kicked off at 9:30 a.m. with an overview of the “Jazz Mass” by Guaraldi biographer Derrick Bang, who is flying in from Northern California for the event. Beginning at 10 a.m., Bill and his band of musicians and singers performed for about 75 minutes in front of what Bill estimated to be a capacity crowd of 200-plus.

“It’s a mass setting,” Bill said of the music. “It has more music during the serving of communion than most Presbyterians are accustomed to. It’s extremely melodic. It’s kind of a gentle yet toe-tapping jazz. I think it’s going to be instantly appealing to folk who have never heard this. It models what creativity could look like in the church. It’s the same old thing that isn’t the same old thing.

“Presbyterians regularly defrost when they come to hear us (Presbybop). People can expect that it will be a worship service and rather than just a mere concert it will be fresh with a lot of energy. It will be an intriguing blend of old and new. And it will be something that many have never heard.”

Bill admitted that he has received some push back from some of his members in the past but it hasn’t stopped him from going forward with the annual Labor Day jazz communion that he called a “regional draw” and a “congregational pep rally” of sorts for the church.

“When we first got this started there were folks who would say, ‘I don’t like jazz. I’m gonna skip,’” Bill said. “And I’d say, ‘That’s fine, your seat will be taken by somebody else’ and it was. It has just kind of developed its own audience. It’s impossible to sustain from week to week in a small suburban town, so it’s taken on a special-event mentality. It’s also something we’ll take on the road and do in other places.” 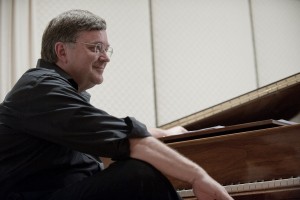 The Rev. Bill Carter and his Presbybop Quartet have created 10 CDs and traveled around the country playing their music.

Yes, the Presbybop Quartet is open to the idea of touring the area performing the “Jazz Mass” if there are requests to do so. And based on the build-up and attention it has been getting, requests will undoubtedly be flowing in to Bill and Presbybop once word gets out about the performance. That’s something that was unheard of 50 years ago, that a jazz band would be playing in a church setting, but it’s just another sign of how things have evolved.

“God is in the thick of creativity,” Bill said. “I do believe that if we call God a creator, we better be ready to see some creating. So anything related to the arts that gives expression both to our human limitation and our human hopes, God honors that and is in the thick of that. As I said in my little sermon at Grace Cathedral, God is in the blue notes and God is also in the improvising of the preacher who has to create an 18-minute sermon out of a three-sentence Bible passage. There’s something generative about God’s creativity, and I think there’s something uplifting and profoundly human about being a part of that creativity.”