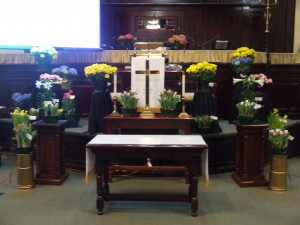 Four miles. That’s all that separated three Presbyterian Church (U.S.A.) congregations. But within that four miles there were not only state boundaries that had to be crossed but also synod and presbytery lines. That, however, didn’t keep this trio of small churches from coming together to form one worshiping body that is unifying to help tackle the issues within the community.

Valley United Presbyterian Church consists of congregations from Athens and Sayre in Pennsylvania and Waverly in New York. Athens and Waverly are roughly four miles apart, with the Sayre building almost directly in the middle of the two. Prior to the merger, Athens and Waverly averaged around 40 worshipers per Sunday while Sayre was somewhere in the low 20s. Because of their low attendance numbers, Athens and Waverly decided to combine and alternate worship services during the summer months in 2012. A year later, Sayre joined in the rotation, and a collaboration was born.

These combined efforts led to talks about a unified congregation, and with Sayre and Waverly both between pastors and the Athens preacher nearing retirement, there was no better time to explore the three churches coming together to form one. A “New Beginnings” initiative by the Presbyterian Church (U.S.A.) helped in the process, and on Jan. 1, 2014, Valley United PC was officially a congregation.

“They were not strong enough in terms of people power and finances to sustain themselves, which was the whole reason why they started the conversation, after going through ‘New Beginnings,’ of the merger,” said the Rev. Sharan Knoell. 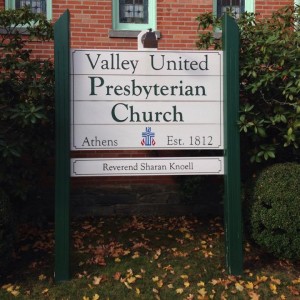 Now that they are one, the church is looking to make a difference in its community.

Valley United PC is currently regarded as a church that resides in Lackawanna Presbytery within the Synod of the Trinity. However, Waverly sits in the Presbytery of Susquehanna Valley in the Synod of the Northeast. The cooperation of the presbyteries is one thing that has not caused added strain to the congregation that’s in transition.

“Both presbyteries have said, ‘You know what, we’re totally in favor of this,’” Rev. Knoell said. “That was probably the easiest part of the process, at least from my point of view. I have been able to make relationships in both (presbyteries).”

Sayre sold its building six months after the merger became official, leaving just the buildings in Athens and Waverly to exist. Services have alternated monthly between the two worship spaces ever since. Initially, some people only went to a service when it was in their home church.

“I think at first certain people would only come when worship was at one church or another church,” Rev. Knoell said. “When they first started they were flipping every week between the three buildings and that wore on people very quickly.

“We have some people who are hard and fast with one building or the other,” Rev. Knoell continued. “The Athens building is not handicap accessible and the Waverly building is not fully handicap accessible either, but it’s easier for people with walkers and wheelchairs to get in and out of the sanctuary, so we do have a good handful of people who only come when worship is at Waverly simply because they can’t get in the Athens building.”

Being able to overcome that attachment to their individual church is something the congregation has successfully been able to do. 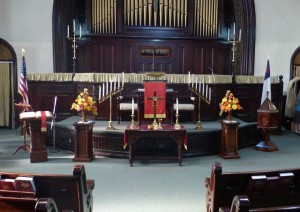 “When I first started here, I noticed that people were pretty much caring for their own,” Rev. Knoell said. “So if a Waverly person was sick, the Waverly people took care of that person. If an Athens person was in the hospital, it was only the deacons who were from Athens who went to visit them. It was a little bit of still holding on to tradition. But now there is equal representation from all three churches on every committee. They were very intentional about having equal representation in everything. … People would introduce themselves and say, ‘Hi, I’m John Smith. I’m from Waverly.’ And I’d think, ‘No, you’re from Valley United.’ It was a little bit of changing the language. So instead of my church and your church, it’s the Athens location and the Waverly location. It’s slow but it’s happening.

“When I walked in here I said this is essentially four congregations. We’ve got the three legacy ones and then all of them combined as a fourth congregation. So it was difficult to try and figure out who knows what hymn, and who’s from what sort of worship tradition and what expectations do you have and realizing that you’re leading a session or leading a committee and people don’t even know each other.”

The congregation has worked hard to put those individualized and regional feelings behind it.

“I preached some very intentional sermons about how you have to be the ones to walk up and introduce yourself,” Rev. Knoell said. “It’s no longer acceptable to say, ‘Oh, I don’t know him’ or ‘Oh, he’s not from Athens.’ No, you need to walk up and introduce yourself. I think in that respect of the congregation getting to know each other and become more united I think we’ve done pretty well on that in the past year.”

Integrating three different worship styles into one service that everyone can feel a part of has been a challenge for Rev. Knoell as well. While Athens and Sayre were still worshiping in a more traditional sense, Waverly had started a contemporary-type style of service that is currently trying to be adopted by Valley United these days.

“We’re trying to figure out a way to move toward more contemporary worship without leaving the traditional stuff behind,” explained Rev. Knoell, who is planning a Legacy Sunday this winter to help honor the three original congregations. “There’s a really strong sense of tradition here, and I wanted to make sure that just because we’re something new here doesn’t mean we’ve forgotten what has come before.”

Rev. Knoell, who joined Valley United six months after the merger, is a member of the Presbytery of Susquehanna Valley as well. The fact that she is not from any of the three “legacy” congregations has been a positive thing, because “while they were meeting each other, they were also getting to know me.”

The church, which houses its offices in the Athens building, has formed a Vision Committee to determine, among other things, which presbytery is right for it and what direction it wants to go in terms of where its church building will be.

“An engineer is drawing up plans to turn both the Athens building and the Waverly building into this church that we want it to be,” Rev. Knoell said. “Both facilities have an equal number of pros and an equal number of cons, which is what’s making the decision harder. We’re also looking at the option of building a whole new church.”

The hope is that a decision is reached this fall so that by the spring of 2016 renovation of one of the buildings or construction of an entirely new one can begin. And while the location of the church is not yet set in stone, that fact that the congregation is now acting as one body gives it a solid foundation with which to build on.