Pastors Jim Walker and Jeff Eddings perform drama on Easter in 2013 at Hot Metal Bridge Faith Community in the South Side of Pittsburgh.

What do you get when you have two college friends with backgrounds in theater and combine that with degrees in ministry? Simply put, you have the Hot Metal Bridge Faith Community church in Pittsburgh.

Pastors Jeff Eddings and Jim Walker teamed up to create Hot Metal Bridge, a congregation that offers a “narrative style of worship that shares the story of God through drama and the arts, as well as traditional forms of worship.” Located in the South Side neighborhood of Pittsburgh since 2004, Hot Metal Bridge is affiliated with both the Presbyterian Church (U.S.A.) and the United Methodist Church. But Hot Metal Bridge is much more than a church that provides worship in the forms of plays and music, it is also a key component in the community, offering meals twice a week plus a Homeless Ministry on Saturdays.

“When we started this, there was the whole emergent church thing, and we kind of got labeled in that,” Pastor Eddings said. “We had all of these punk rock kids, and we did a Bible study in a tattoo shop. We were the cool kid on the block. You can get caught up in that, trying to be the unique church. I’m not worried if we’re unique or not. I’m worried if we’re authentic. I hope that more than unique we’re being an authentic church because that’s what I’ve seen draws people over the years.”

Both Pastor Eddings and Pastor Walker had been doing youth ministry in United Methodist churches and attended Pittsburgh Theological Seminary together. They had similar interests in theater and had teamed up to put on shows in churches. Then in 2002, they hatched the idea of a different style of worship and began holding monthly services for two years before eventually starting Hot Metal Bridge two years later. The twosome approached some people from the seminary who were on a task force for the PCUSA’s New Church Development Commission with their idea. It led to Pastor Eddings being ordained Presbyterian, which went well with Pastor Walker’s United Methodist background.

Initially, the two preachers weren’t sure they could latch on with a denomination. They approached Pittsburgh Presbytery and enrolled in a church planting evaluation. Following an all-day process, the report came back “very luke-warm” and it didn’t build confidence in the two pastors.

“At that time we were just doing it,” Pastor Eddings recalled. “We felt called and felt there was a need, so we kept doing the monthly service. So we were basically saying to the Presbyterians, ‘What do you think? You wanna come along?’” 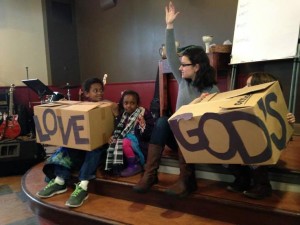 Don Dawson, who at the time was the chair of the evaluation committee, surprised the two pastors by telling them that the presbytery would in fact support their congregation.

They then set up a church in the South Side of Pittsburgh, a neighborhood that was a once-thriving steel-mill area that became redeveloped, causing the area to include a wide mix of demographics from college students to young professionals to poorer families who used to work in the mills. Because of its proximity to the mills, there was a bridge that was regularly used to transport steel from one site to another, and it became known as Hot Metal Bridge. The church, which started in a Goodwill cafeteria, was located only three blocks from that bridge, and thus the name of the congregation.

“Hot Metal is distinctly Pittsburgh,” said Pastor Eddings, explaining the origin of the church name. “And the bridge imagery worked for us. We wanted to be a bridge to God for people through Jesus Christ. And using Faith Community was our way of trying to steer away from some of the baggage of the church brand and try to emphasize that this is a community of people gathering together.”

The church building moved a block closer to the bridge in 2007 when it purchased a restaurant/bar location. It adequately holds the 150-200 people who turn out on a Sunday morning to hear a sermon by one of the pastors or come to see some other expression of the gospel. Pastor Eddings admitted that dramas were more prevalent when the church started, with Pastor Walker being the main author of those scripts. Nowadays, worship has drifted slightly away from plays but has continued to be focused on other different styles.

“In the early days, we did a lot of drama,” Pastor Eddings said. “Jim was very gifted in writing the dramas. We still do some drama – we do a little bit less now – but we still try to do other creative things. We have a lot of artists in the community.” 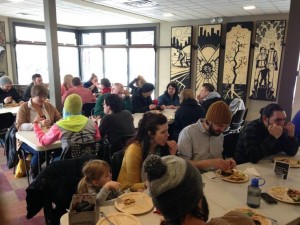 A meal is served every Sunday at Hot Metal Bridge Faith Community — along with communion.

One example came recently during a series on the Sermon on the Mount. As people were speaking about the scripture, a local artist could be seen painting a picture of Jesus with the disciples. The painting took about six weeks to complete and coincided perfectly with the sermon series.

“It was very cool to have him in the background painting during the service,” Pastor Eddings said. “So we try to find creative ways to interact, we try to be very participatory to get people involved with our music. We try not to make it a one-person show.”

Pastor Eddings will be the first to admit that the dramas and other programs will have their share of glitches. However, putting on a flawless presentation is simply not what Sunday mornings are about at Hot Metal Bridge.

“We’re not slick. We never had slick PowerPoints,” he said. “The dramas are not slick productions either. Sometimes people are holding the scripts in their hand because we just created something a little earlier that morning. We started out trying to appeal to a younger generation but found out that when you’re authentic, everyone is hungering for that.”

Something else that makes Hot Metal Bridge one-of-a-kind is that it has communion every Sunday followed by a meal. Although at times this summer, the meal did not come after the service but came instead during it.

“We did something this summer called Brunch Church, suggested by Pastor Jenn Frayer-Griggs, where instead of eating afterwards we had the tables and chairs set up and everybody brought some food to share,” Pastor Eddings explained. “We had a little liturgy to start the service and a little bit of music and then everybody got up and got their food and sat back down and we continued church. We were eating and worshiping all at the same time. People really resonated with that. They said it was great to be sitting across from somebody and interacting with them in that manner rather than just facing forward like they usually do.” 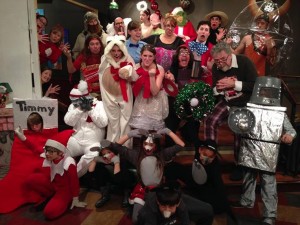 A mystery dinner theater titled “The Christmas Shop Uprising!” was a fundraiser performed for mission trips at Hot Metal Bridge.

The church building’s former restaurant/bar space helps make Brunch Church and its regular post-service meals more possible than for a congregation that meets in a sanctuary filled with pews. These food-related Sundays also blend in well with Hot Metal Bridge’s other outreaches. On Tuesdays and Thursdays, the church supports a meal ministry that’s simply called “Table” and brings in between 75 and 100 people who vary from homeless to those just seeking fellowship. Pastor Frayer-Griggs oversees the Table and once they even held a “Fancy Table” that consisted of a complete table setting and a menu that included shrimp and steak.

“One of the young homeless persons came up to Jenn after and said, ‘I was able to forget I was homeless for a little while,’” said Pastor Eddings, who gave plenty of credit to his staff for their hard work and ideas like the “Fancy Table.” “I have good people who are willing to join in to what the Spirit’s doing.”

There’s also a team of people from the church that packs about 40 lunches on Saturdays and takes them to the “camps” where homeless people live.

“Through that we have really established relationships with a lot of the homeless people in the area,” Pastor Eddings said. “The nice thing is we have different groups and volunteers that come in and help with the homeless and help with the meals on Tuesdays and Thursdays, so that’s another way we’ve been able to make some connections with other churches or college students.”

Hot Metal Bridge has also made plenty of connections with the other people in the South Side of Pittsburgh. And while there are dramas and various artists performing from time to time on Sunday mornings in the building, its ministry continues to reach far beyond the church’s walls.