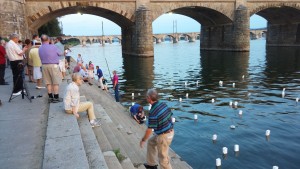 People place lanterns into the Susquehanna River during Market Square Presbyterian Church’s ‘Candles on the Water’ remembrance on the 70th anniversary of the bombing of Nagasaki, Japan.

In August of 1945, the United States dropped two atomic bombs on the Japanese cities of Hiroshima and Nagasaki. It helped bring an end to World War II, but it also took the lives of over 120,000 people and countless others who would later die from radiation exposure. Seventy years later, that act of war was remembered and memorialized in Japan and around the world with the overriding sentiment that something like this should never happen again.

Market Square Presbyterian Church in Harrisburg, PA, was front and center on Sunday evening, Aug. 9, a day that marked the 70th anniversary of the devastation caused in Nagasaki. The church’s Peacemaking Committee co-sponsored the “Candles on the Water” program that included a service in the sanctuary followed by a silent procession to the nearby Susquehanna River where lighted lanterns were placed into the river in remembrance of the ones who lost their lives because of the bombings.

“If there was an overall theme for the evening it was the danger of having nuclear weapons in the world,” said Rev. Tom Sweet. “The folks who were here were peacemakers who want to see a nuclear-free future. The Nagasaki and Hiroshima bombings obviously are graphic examples of what happens when they are used. … If I had to characterize an overall theme it would be that we don’t need nuclear weapons and let’s do what we can to see that that happens.”

Expecting around 30 people, the “Candles on the Water” program drew close to 100 people as well as several television and print media to Market Square PC. The event included a welcome by Rev. Sweet, a keynote presentation by Dr. John Reuwer of the Physicians for Social Responsibility and the reading of a written eyewitness account of the Japan bombings. There were also a song and a litany before the procession to the riverfront less than a block away where a horn was played to help mark the occasion. 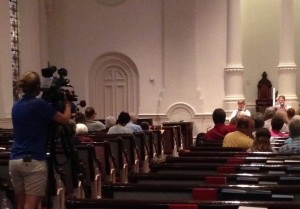 Close to 100 people and several media outlets turned out for Market Square PC’s remembrance to the bombings of Hiroshima and Nagasaki.

Other co-sponsors of the event included, among others, the Pennsylvania Council of Churches and Pax Christi Harrisburg, a Catholic organization that “rejects war, preparation for war, every form of violence and domination.” For Market Square’s Peacemaking Committee, it was just another way for it to extend its presence in situations like this.

“We have a very active Peacemaking Committee here at the church,” Rev. Sweet said. “Being on the liberal and progressive end of the theological stream here both socially and theologically, lots of our folks have interest in issues of this nature, so it’s just an extension of what we normally do in terms of our ministries, peacemaking and advocating for non-violence, for the poor… It’s just really kind of the DNA of our congregation.”

Hiroshima, which happens to be a sister city to Harrisburg, was targeted by the U.S. military on Aug. 6, 1945, and three days later Nagasaki was hit with another atomic bomb. Aug. 9 was chosen by Market Square PC for the commemoration because it fell on a Sunday, making it the most accessible day for anyone who wanted to take part in the program. The church had hosted a similar remembrance five years ago prior to Rev. Sweet’s arrival.

This one, however, had nine organizations that were involved in the planning and sponsorship of the “Candles on the Water” gathering, making it much more of a community event than one solely provided by Market Square PC. 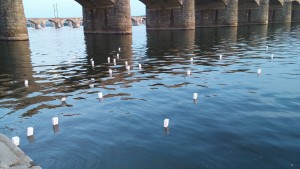 Lanterns float down the Susquehanna River following the ‘Candles on the Water’ ceremony in Harrisburg.

“It was in some ways an ecumenical event,” Rev. Sweet said. “Each person brought his or her own spirituality and faith to this event. There was no preaching or pontificating. The ambiance was that we are God’s children and that nuclear weapons are an outrage and a blasphemy against God and against humanity and against the planet, and this was one of the ways in which we could give witness to it. For the folks who were here, it was a real encouragement. There was conviviality at the same time that there was a certain gravitas to it, and I think people were moved by it. I think it was a good evening.”