On the Community of Reconciliation Church website there is a verse from Galatians that perfectly sums up the thinking behind who that congregation is. It reads, “There is neither Jew nor Greek, there is neither slave nor free, there is neither male nor female; for you are all one in Jesus Christ.” While that could be a theme for any church, it seems a little extra appropriate for this specific one in Pittsburgh. 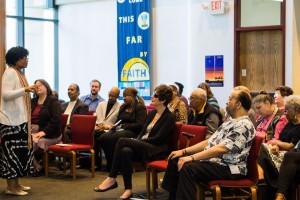 Rev. Denise Mason Bullitt preaches to her congregation on a typical Sunday morning at Community of Reconciliation Church in Pittsburgh.

Community of Reconciliation Church, or COR as they call themselves, is a congregation comprised of four different denominations – Presbyterian Church (USA), United Methodist, United Church of Christ and Christian Church (Disciples of Christ). It is also historically related to the American Baptists, which were part of the congregation for over 30 years before recently separating. It all adds up to a unique situation for the church that sits on the doorstep of both the University of Pittsburgh and Carnegie Mellon University.

“From COR’s inception, when they heard the call of Dr. (Martin Luther) King and that the 11 o’clock hour was the most segregated hour of the week, our congregation evolved to understand that very holistically,” said the Rev. Denise Mason Bullitt, who has been preaching at COR for the past 15 years. “It isn’t just the separation of the races or the cultures, but there is a mentality within our society that is divisive and that is separatory. COR has been a people who just have understood God to say, ‘We are one.’ The degree in which we can knock down dividing walls is a call and claim on our lives. … It’s just something about who we are that we believe that inclusivity is and should be part of the DNA of every Christian, and that’s kind of how we live our lives.”

Because of its proximity to Pitt and Carnegie Mellon – one door opens up onto one campus and another door spills out onto the other – it also allows for a wide demographic to attend church services on Sunday mornings.

“On any given Sunday you will see a diversity,” Denise said. “We have infants to about 90-year-old people worshiping with us. We have every generation accounted for. We have African-Americans, European-Americans, we have people who are first immigrants to the United States to people who have been here for decades. We have university professors and engineers worshiping with people on fixed incomes, sometimes people even who are homeless or certainly are in transition. We have college students, and everyone is just hanging out there together. 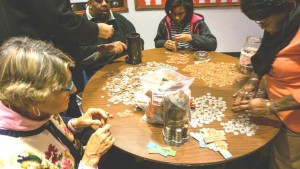 “You will see some men in a shirt and tie and sometimes even three-piece suits and on the same day they might be sitting literally next to somebody in cutoff jeans and a T-shirt. They may have sandals on, they may be barefoot. We definitely have the gamut and array, and everybody’s comfortable. I think that’s the most important thing for us. You need to come in what makes you feel comfortable and what makes you be prepared to worship. For some people what they have on is important, and for others they’re just happy they were able to roll out of bed that day.”

COR was founded in 1968 during the height of the Civil Rights Movement and included three Presbyterian Churches, two of which were white congregations (First PC, Bellefield PC) and one that was black (Grace Memorial PC). It described itself as “interracial in composition, innovative in style, missional in intention and ecumenical in relationships.” Then in 1982, the church again reached out to its Protestant brothers and sisters and opened its doors to any denomination as part of the COCU (Churches of Christ Uniting) campaign. That’s when the United Methodist, United Church of Christ, American Baptist and Disciples of Christ denominations decided to join COR and begin its history as a multi-denominational church.

“In the ’80s that was a huge, huge thing in church life,” Denise recalled. “Many people were very excited about the possibilities of the end of denominationalism and the churches of Christ would fully unite. The Community of Reconciliation at that time was very, very much into inclusivity. We thought we would get on the bandwagon first. We reached out to all of the mainline denominations and said we would like to become one of these multi-denominational bodies and would be one of the ones to lead the pack in that. As it turned out four other denominations would agree to come together and become affiliated with the Community of Reconciliation.”

Preaching to people who are from four different denominations might seem like a tough thing to do. For Denise, who is ordained through the United Church of Christ, she doesn’t see it as that big of a deal. 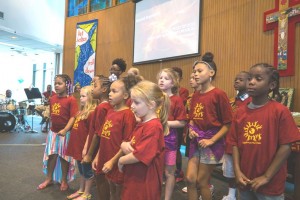 “The truth of the matter is that the church, especially the holy catholic apostolic Christian church, is like our DNA – we’re more of the same than we are actually different,” Denise explained. “Even though we may come from a (different) background, it doesn’t feel different than worshiping with any other congregation.”

Prior to Denise’s arrival in 2000, COR would have two preachers lead the service each Sunday and would rotate them. So one Sunday it could be a Presbyterian minister leading the service and a Methodist pastor preaching and the next week it could be a UCC pastor leading and a Baptist minister speaking. Now under Denise, the service has become more blended, including bits and pieces from all of the denominations represented.

“The denominationalism and the things that separate us have become a little more gray, a little softer around the edges than perhaps they were back in the ’70s and ’80s,” she said. “We just try to celebrate the best of who everybody is.”

In 2012, COR went from a traditional service to a more contemporary one that now includes praise songs and more energy. It has increased attendance among the 20-somethings by about 15 for a worship service that now averages between 75-80 on a given Sunday.

As far as the elements of the service are concerned, the Disciples of Christ denomination takes communion every Sunday, and during the Holy seasons of Easter and Lent, COR will hold communion each Sunday as well. Regarding baptisms, COR does not have a pool, so there is no immersion, so a nearby Baptist church is used from time to time to complete this act for those wishing to be baptized in that manner. When baptized, they become members of COR, not necessarily of one of its particular denominations. However, any member can attend meetings for any of the denominations. 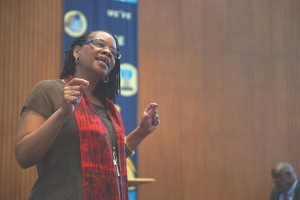 Rev. Denise Mason Bullitt says “Embracing ecumenism, embracing diversity and inclusivity is a hallmark of who we are.”

Speaking of attending meetings, those are somewhat surprisingly the hardest thing about being part of a multi-denominational church. Denise points out that all of the denominations have regional meetings at the same time and trying to get to all of the gatherings for Presbyterians, Methodists, United Church of Christ and Baptists can be an impossible situation.

“It is a challenge of great magnitude to have a relationship with multiple denominations,” Denise admitted. “If you think about how many meetings you have as a member of the Presbyterian Church – your local congregation, your presbytery, your synod and your General Assembly — we have that times four right now and at one time it was times five. So we get invited to a whole lot of meetings. And we get a whole lot of mail. … It is a juggling act to try to make yourself known in all places. They all tend to happen around the same time; I can’t go to every single annual conference or General Assembly. There has to be a rotation or I’d never be at my local church.”

It all adds up to a unique situation for an equally unique congregation in the heart of Pittsburgh. It’s a role that the people of COR relish on a daily basis.

“Embracing ecumenism, embracing diversity and inclusivity is a hallmark of who we are,” Denise said. “We think Jesus was the most progressive and radical being who has ever walked the face of the earth, and so if we say we want to be Christ-like, if we want to be like Him, then we have to be about that inclusivity in as many ways as we possibly can. For example, our church has been fully accessible for over 30 years while other churches are just starting to get on the bandwagon.”