Prior to 2006, Third Presbyterian Church of Uniontown, PA, had never been on an adult mission trip. It wasn’t that the congregation didn’t feel it was important – it certainly does its share to support missionaries and mission work overseas — it was just that the timing and resources needed to take on such an excursion never seemed to fit into the church’s plans.

That all started to change in 2005 when the Presbytery of Redstone traveled to the North African country of Sudan. Several members from Third PC had wanted to go on the trip but were unable to. That missed opportunity created a spark in the congregation, and the following year 10 members from Third PC traveled to Kenya to visit a hospital near Nairobi to be with missionaries the church supports through World Gospel Mission.

“That was the first adult mission trip we had done at Third Pres in forever,” recalled Marilyn Fitzsimmons. “I’ve been there 52 years and never was involved in a mission trip. And it kind of lit the fire for those of us who went.”

Since that time, Third PC has made mission trips a priority, having gone on a total of 24 as of the summer of 2015. In 2007 alone, the congregation took five journeys to the Gulf Coast to help with cleanup following Hurricane Katrina. It has also since traveled to Haiti three times as well as Galveston, Texas; Chinle, Ariz.; and the coast of New Jersey, among other places, to help with rebuilding following devastation in those areas.

“We really, really fell in love with the whole idea of serving God’s people that way,” said Marilyn, who is the chairperson for the church’s Mission Committee. 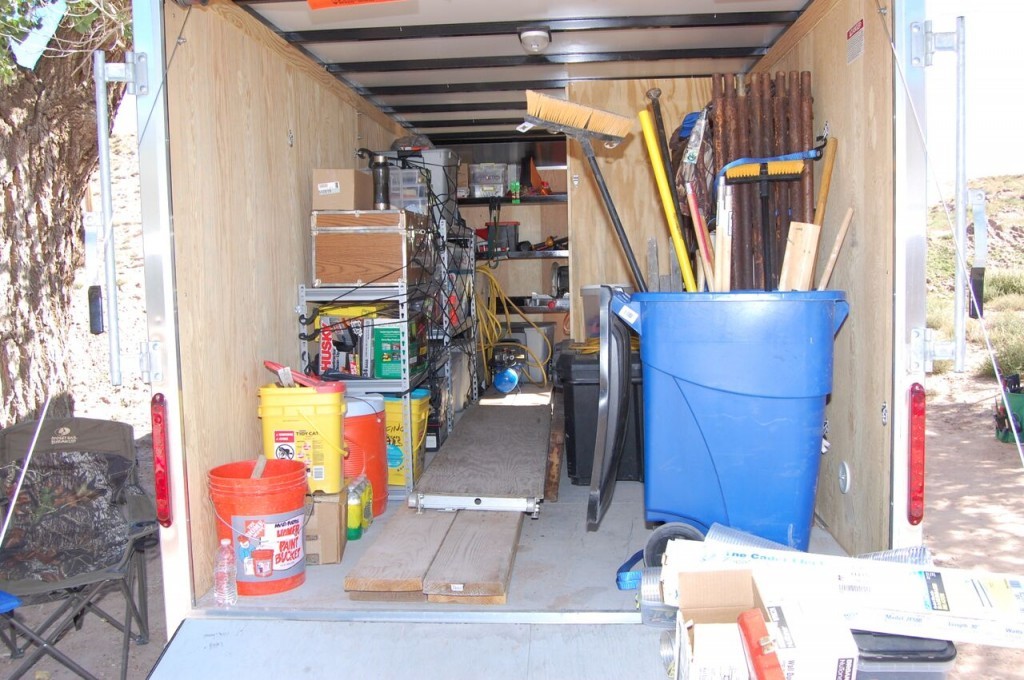 The Third PC trailer is stocked and ready for another mission trip in the States.

Not only has Third PC been traveling to other parts of the country performing mission work, it is also doing its fair share in the Uniontown area. Through the initiative and leadership of Ira Chrise, the church has created a “Handy Man Ministry” that goes out into the community and completes small jobs – ranging from changing a light bulb to making a handicap accessible ramp — for senior citizens in Fayette County. One of the key components to the “Handy Man Ministry” is a 16-foot tool trailer that Third PC purchased in 2012 with the help of a Synod of the Trinity Network Grant that awarded the church $2,500.

“As we were on these mission trips we saw other church organizations, especially the Methodists, and they had their own tool trailers,” Marilyn said. “Although PDA (Presbyterian Disaster Assistance) and Samaritan’s Purse provide you with tools, if you’re on the job site, so many times you have to leave or get in touch with somebody and time is wasted doing that, so we decided we wanted to have our own tool trailer.”

But the trailer is used for much more than just carrying tools. With it sitting unused on many days, Marylyn and fellow church members Denise Engle and Mary Jo Seeman came up with an idea of how to utilize it even further than just on mission trips. They created “Gifts of the Magi” by emptying the trailer of its tool and filling the shelves instead with small presents for a Christmas sleigh of sorts that could move around the community. 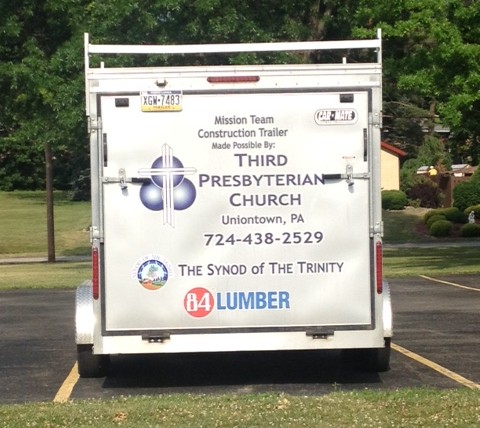 The Third PC tool trailer includes the names of the partners that help the congregation get the mission work done.

“We went into several of our housing projects and told the story of Jesus’ birth and let the children go in and pick out three gifts for family or friends and we wrapped them for free,” Marilyn said of the ministry that started in 2013. “It wasn’t the intent of that tool trailer to be used for that but it’s come in very handy.”

If you have a trailer, you need a truck to pull it. So in 2014, a truck was also purchased by Third PC that has also been used to help people move or clear snow from the church parking lot. Again, a Synod of the Trinity grant – this time a Peacemaking Grant – gave the church $4,000 to help purchase this vehicle.

It has resulted in a couple of big-item purchases for mission work that Third PC will admit it didn’t see coming a decade ago. But now that the congregation has gone down the missional road some two dozen times, it sees that this is its new calling. And it has embraced it.

“God always provides,” Marilyn said. “Sometimes we get so hung up on ‘How can we do that? We don’t have the money.’ But if you have faith, he’s going to provide. It may not be the grandiose idea you had at the beginning, but it’s certainly going to be a worthwhile project and it’s going to touch other people’s lives and it’s gonna let them know that you care because He cares. And that’s what the trailer has meant to us. All we do is go out to people and explain who God is, who His son was and what it means in our lives. We think the trailer really helps us do that.”