Vicki VanSickle knows about hunger. For a time many years ago, she was raising two boys on her own, and when it came time for a meal, they ate and she didn’t. Now, she’s trying to make sure no one else has to go through what she and her children went through.

Vicki is the director for the Summer Food Service Program at Columbia Presbyterian Church in Lancaster County, PA (Presbytery of 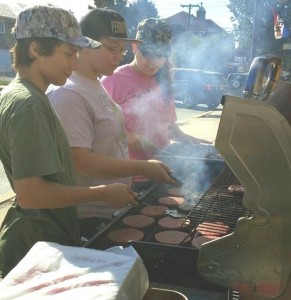 Hamburgers are just one of the many foods served during lunches at the Summer Food Service Program in Columbia.

Donegal), which is providing lunch for youths 18 and under five days a week for the 11 weeks during the summer when school is not in session. In its fourth year, the program is hoping to serve in the neighborhood of 8,000 meals in six different locations near the Susquehanna River community this summer.

“I’ve seen hunger,” said Vicki, who launched the SFSP at Columbia PC in 2012. “I know what hunger is. I love kids and I just want to help them. I love cooking, I love food. It’s just all about fighting hunger.”

But it’s even more than just feeding the kids food, it’s also about getting them quality food.

“It’s not just about feeding kids either,” she added. “I think they deserve to be fed good food. Just to see their smiling faces… And we do more than just feed. It’s relationships being built here.”

There’s plenty of hunger in Columbia. According to the National School Lunch Program, over 69 percent of Columbia School District students received free or reduced-priced lunches during the 2014-15 school year. Because of that figure, the Columbia SFSP locations are considered “open” sites, meaning any child regardless of their situation can participate in the program and receive a free lunch. In a community that has less than 50 percent who receive free or reduced lunches during the school year, only those eligible children can receive a free meal through the summer program.

“There is no pre-registration for kids, there are no income requirements, they just show up and we feed them. We’re also on the Hunger Hotline, so any child from anywhere can stop in at one of our sites and benefit from the program.”

The program in Columbia has grown each year, starting with 3,700 meals served in 2012 to 4,300 the following year to close to 6,700 last year. The amount of locations that food is available is also increasing. There are five places meals are handed out in Columbia (Columbia PC, St. John’s Lutheran Church, Wagon Works apartment building, the VFW’s outdoor pavilion and the Columbia Consolidated Fire Department) and it has also spread across the river into York County at the Wrightsville Presbyterian Church. Consolidated Fire Department and Wrightsville PC are new sites for 2015, with Wrightsville PC hoping to be a stand-alone location next year.

“We’re trying to reach out to more children in the different areas,” Vicki said. “The kids all walk to the sites.”

Columbia PC is the “central kitchen” where all of the food is prepared and then distributed to the different sites, which serve the meals from 11 a.m. to 1 p.m. from June 8 to Aug. 21. Vicki estimates she has used about 70 volunteers so far this summer and could come close to the 117 total she used in 2014.

“They come from all nationalities, all races, all ages, all genders, all churches. We all come together as one,” Vicki remarked. “It’s an amazing program. We put the feelers out there (for volunteer help) and God just sends them.”

As for what’s on the menu each day, it varies greatly. Twice a week and always on Friday hot lunches are served. Sometimes it’s a combination of hot and cold — like a sandwich and buttered corn — and other times it can be a chef’s salad with ham, cheese, pickles and dressing as possible add-ons. Other options include things like tacos, hot dogs, hamburgers, pulled pork and spaghetti.

“We really try to keep the variety going so it doesn’t get boring,” Vicki said. “Also, I’m a big advocate of farm-to-plate, so they’re getting a lot of watermelon, cantaloupe, honeydew, grapes, bananas, apples — as much fresh as we can give them.” 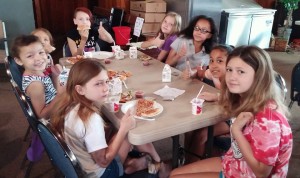 The goal is to serve 8,000 lunches this year in Columbia as part of the Summer Food Service Program. This meal included Little Caesars pizza.

Since the SFSP is operated by the United States Department of Agriculture, it reimburses Columbia PC for about 50 percent of the cost of the food. The rest of the funding comes from the community, which is targeted through appeal letters. Startup costs in year 1 also included big equipment items like industrial refrigerators and freezers to keep the food in during the summer and meat slicers to help prepare the lunches. Those initial purchases were not covered by the USDA funding.

“We’ve been blessed,” Vicki said. “It (contributions from the community) covers most of it (the costs), but we could always use more. I could kick up those meals a notch and we could be buying more things to get us by a little bit more efficiently. We still hand-wash dishes, and we need a bigger ice machine.”

Also on Vicki’s much-needed wish list are a food transportation vehicle and an elevator, both of which are sorely needed by the SFSP to make the program run more efficiently and things that Vicki described as being “desperately needed in our mission work.”

“A van would be a blessing,” Vicki said. “We transport food using personal vehicles — at times four different drivers are needed because of the volume that we are serving. Some type of elevator system would be an even bigger blessing. Food (40-pound cases of protein, cases of 10 cans, racks of breads, 10-12 lopes at a time to name a few examples) is brought in continuously on a very steep stairwell to get to the downstairs kitchen and pantry. To get to the serving area, we need to transport catering bags, crock pots and electric roasting pans up two sets of stairs. We make it happen, but my greatest fear is that my body and all those who help will pay the price someday.” 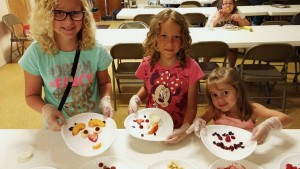 These “Kids in the Kitchen” had some creative fun with their fruit plates during the Summer Food Service Program.

Another side product of the SFSP is the “Kids in the Kitchen” program, which enables children who once received the free summer lunches to now be on the other end of the spatula and assist in handing out food at the different locations.

“One of them is my site supervisor and two of them are backup site supervisors,” Vicki added. “They’re continuing to progress. They have a great burning desire to keep learning more and more and more. It’s just awesome. Every morning before we do food prep we have a circle of prayer. I see these kids and they talk about God to me at times. They just love to serve.”

The SFSP is just one part of Columbia PC’s Hands Across the Street ministry that also includes a clothing bank, a winter shelter and a day center for housing. At “First Tuesday,” which is part of a program that offers regular community meals, Vicki also teaches good nutrition habits once a month, further broadening her relationship with the community by doing what’s been called of her.

“We’re the hands at the feet of Christ,” Vicki said. “We’re here to serve. He said, ‘I was hungry and you fed me.’ That’s what it’s all about here. We don’t go out and beat ‘em up with scripture. We just show them the love of Christ.”

While all of this hasn’t necessarily increased attendance on Sunday mornings at Columbia PC, it has been paying dividends in other ways.

“It’s increased the awareness in the community about Columbia Presbyterian and Hands Across the Street and that has brought people in by themselves because they want to serve and they want to make a difference,” said the Rev. David Powers, the pastor at Columbia PC. “In other words we’re not just a building that’s sitting there. The church has grown over the past 11 years in a profound way because of being known in the community and reaching into the community.

“If a church is out there thinking about it but they’re not sure if they’re going to increase (attendance) on Sunday morning, they need to think about it anyway because over time it will be an investment to the kingdom.”