For Chartiers Hill United Presbyterian Church in Canonsburg, PA (Washington Presbytery), one could say its calling is associated with ministering to the mentally and physically disabled. Maybe it’s because of its proximity to the former Western State School and Hospital, better known as the “Western Center,” which was a state-run mental hospital and reform school in the Canonsburg area that closed its doors in 2000. Due in large part to former Pastor Jim Evinger and his regular visits to the Western Center in the 1980s, there were a couple of weekly visitors from the facility at Chartiers Hill United PC on Sunday mornings. 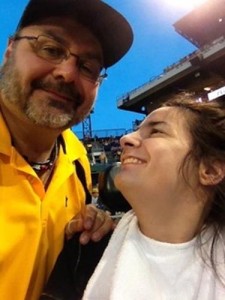 Pastor Jim Agnew shares a moment with his daughter Hailee, who is the inspiration for Jim’s devotion to minister to the disabled.

During this same time Keith Norvell, a child with Down Syndrome, and his weekly involvement in the church further accentuated the congregation’s desire to be a supportive body to the physically challenged. Then about three years ago, Pastor Jim Agnew was called to Chartiers Hill United PC as a Seminary Graduate Assistant Pastor, bringing with him a family that included twin daughters, one of which had cerebral palsy. Hailee’s presence continued the congregation’s association with the disabled, so much so that once a year it devotes an entire Sunday service to ministering to the disabled.

Called “Disability Inclusion Sunday,” the service falls on the Sunday after Father’s Day, making it a very fitting day considering the role Jim and Hailee played in the congregation on a regular basis. Disability Inclusion Sunday has been part of Chartiers Hill United PC’s schedule for the past three years, but Jim has had to preach the last two without Hailee in the pew since she passed away suddenly in January 2014.

The Agnew family’s journey has given Disability Inclusion Sunday – and Chartiers Hill United PC’s association with the disabled – new energy, according to the church’s senior pastor, Rev. Don Austin.

“Jim (Evinger) really encouraged people who were able at Western Center to come out and be part of the life of some of the local congregations,” Don recalled. “We had two older women who would come out every Sunday. So, the church does have a history of being sensitive and aware of including, but Jim (Agnew) has brought a new dimension to it. Jim has been motivated to take this on as something that is important to him, and it’s something he does with great skill and gifts.

Jim learned about Disability Inclusion Sunday when he stumbled upon a Presbyterian calendar while still at his home congregation, Church of the Covenant in Washington, PA. When he was a supply pastor, he would speak on the topic if it happened to fall on a Sunday when he was preaching. Then when he took the position at Chartiers Hill United PC, it became an annual occurrence.

Don admitted that Disability Inclusion Sunday has led to conversations about ways to better minister to any disabled person who might attend on a given Sunday.

“A lot of times in our Christian Ed meetings we talk about not only how we can make our Sunday School more safe but also the possibility of having some strands of our Christian Ed curriculum for people with various disabilities,” Don said. “We feel these are some of the things God is leading us to do through Jim and the service and other things in the life of the congregation.”

As far as elements for the service, Hailee had a role in it the first year. A touching moment came during that 2013 worship when Hailee picked out the Jennifer Knapp version of “Jesus Loves Me” to be played. Hailee, with the help of her Dynavox voice machine, sang along with the tune. The next year, the song was played again, leaving the congregation with an emotional tribute to Hailee.

“I thought this was God’s plan to put me in the ministry and she would be like my ministry partner,” Jim said. “Between the two of us I could show the world that people like her do have gifts to offer. I say we are still a ministry team, only I’m in this world and she’s in the next.”

There’s also a mother in the congregation with a son who has autism and she has led the children’s sermon on Disability Inclusion Sunday to educate the youth on the disability. Special video segments are included in the worship, too. Jim also uses sign language when the Gloria Patri and doxology are sung, something he does regardless of what Sunday it is to further raise awareness for the disabled.

“It’s kind of a toe-dipper,” Jim admitted. “Those two songs, everyone knows them. You’re not looking at the hymnal, so your eyes are up. Then when you see the motions as you’re singing the words, it kind of gives an added depth to what you’re singing.”

Don appreciates that Jim tries to keep the service on Disability Inclusion Sunday as normal as possible.

“He tries to keep it all very Presbyterian in the sense of letting the church know that the Presbyterian Church has this as an important theme,” Don said. “It’s something the church has worked on in various dimensions over the years, so he’s very intentional in that area. The format of the service is somewhat the same from beginning to end, but the prayers, the responsive pieces, the scripture passages, the videos are all then infused with something that builds on the theme of that day of inclusion or understanding people’s abilities and not disabilities.”

Attendance for Disability Inclusion Sunday does increase slightly on that Sunday in June partly because Jim turns to Facebook and other media to promote the service. Jim would like to see the numbers on that Sunday grow more because he feels disabled people and their families don’t regularly attend church.

“Not only people with disabilities, but families with disabilities are probably some of the most unchurched people there are,” he said. “First, there are a lot of physical obstacles. A lot of our older churches were built in a time when there wasn’t a lot of consideration that people would be in wheelchairs or whatever. Now that’s kind of changed with ADA (Americans with Disabilities Act). Even besides providing a physical space, you need to let people know that they are welcome in churches, that you will do whatever is necessary to help them.”

Jim is hoping something like Disability Inclusion Sunday provides a spark for the disabled and those people who are sitting in the pews.

“My hope is that it brings awareness and re-centers everyone,” Jim concluded. “This is something that can really be a uniter. How you look at them is probably how God looks at us. We’re all disabled in front of Him. They love you because they are dependent upon you, and God loves us because we should be dependent upon Him.”