Alyson Wilson finds her calling as a YAV in Chinook, Montana

In many ways Alyson Wilson was your average fresh-out-of-college young adult. With a degree in Business Management from King College in Bristol, TN, Alyson spent a couple of years trying to find the right employment that would take her down the path to a successful career. But nothing seemed to click for her. 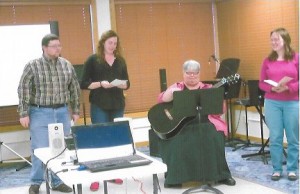 Alyson Wilson (right) practices for a performance with two other Young Adult Volunteers (at left) and a Lutheran pastor in Chinook, MT, where she spent a year as a YAV.

Then in 2015, Alyson learned about the Presbyterian Mission Agency’s Young Adult Volunteer program from her father, the Rev. Don Wilson, who is the General Presbyter for Kiskiminetas Presbytery. She would accept that call to be a YAV for 12 months, spending the time in a small Montana town where she worked with the elderly, youth and children. It helped her realize her passion for caring for people and has resulted in her enrollment at Pittsburgh Theological Seminary where she is currently working on Master of Divinity and Master of Social Work joint degrees.

“Since I was struggling to find employment, he (her father) highly recommended I apply (for the YAV program) for a clearer understanding of what my call is in life,” Alyson recalled. “It made me realize things that I hadn’t considered about myself before. It definitely drew attention to things that I really didn’t think I would consider. I knew that I was looking for a calling in life, but it also helped me learn more about community, too, and the different kinds of relationships that people can have.”

The YAV program is a service opportunity for anyone ages 19-30. Applicants chose three sites in the United States and two international locations from a list. Alyson picked New Orleans; Little Rock, AK; and Chinook, MT; as her three American sites while selecting South Korea and Peru as her out-of-country ones. Each site varies in regards to the work that can be done there, from social justice to agriculture to community volunteer work.

“I would highly recommend it to any young adult who’s also struggling with calling or just needs a bit of a different perspective on how to look at their situation,” Alyson said of the YAV program. “It’s definitely an enjoyable program but can be challenging, but the experience from it I believe is worth it.”

Alyson was matched up with Chinook by the YAV program as her place of destination, coming home only for a Christmas break.

“Chinook is pretty rural,” she said. “It’s 30 minutes from the eighth largest town in Montana – Havre.” 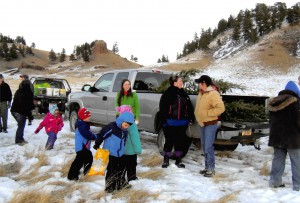 Alyson Wilson (green coat) prepares to go searching for a Christmas tree for the Presbyterian church in Chinook that Alyson did some volunteer work for during her YAV experience.

Part of Alyson’s work in Chinook came at a local church. It was there that she realized what God was calling her to do with the rest of her life.

“Once a week we would go see one of the pastors who was our spiritual director for the year,” Alyson explained. “Through talking out my strengths and weaknesses, I came to terms with why I have the strengths I do and why I have the weaknesses and how I have overcome some of them over time.

“During coffee hour at the senior living facility, I was listening to the ladies talk about their stories and I realized that I really do enjoy this. I like hearing people’s stories and seeing where I can help out and contribute something.”

There was a trio of YAVs stationed in Chinook with each rotating between three jobs. They consisted of elderly care in local nursing homes and senior centers, youth programs in the area schools, and child care. There was also some work done with children at evening Bible studies and some additional duties in the local churches leading music and assisting the pastor as was needed. All of the work in the community was coordinated by the five churches in Chinook.

Alyson received a $125-a-month stipend during the year of service. “They encourage simple living in the program,” Alyson said. YAVs are asked to raise $3,000 in funds for those who are working in the U.S. and $4,000 for those going the international route. Alyson lived with a host family during her year in Montana and they, too, received a stipend from the program for their volunteerism. It costs roughly $22,000 per YAV per year to have them stay at their site, Alyson said. 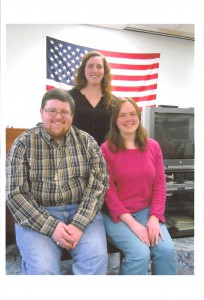 The two YAVs who spent a year in Chinook, MT, along with Alyson Wilson (right) are Alex Sprague (left) and Becca Roberts (center).

“I gained a whole lot of experience,” Alyson said. “By working with the senior community, I learned to become a bit more open in telling my story in getting to know them and have patience, in some aspects, with their forgetfulness. And I learned how to knit. I enjoyed knitting with them.

“Working with the kids I learned the importance of setting boundaries. The kids have a whole bunch of energy and want to talk to their friends and not really listen to the lesson, so trying to learn how to navigate that was a growth process for me, too.”

This interaction allowed Alyson to realize something about herself.

“Pretty early on I came across the fact that I do enjoy working with people,” she said. “In whatever career I do end up going into, taking care of people is something that I definitely want to make a priority. I learned that as much as I’d like to think I’m fairly flexible in my personality and go-with-the-flow things, I kind of do better when I have some structure in my personal life. I like to know what to expect each day.”

Even though Alyson has found a calling at Pittsburgh Seminary, exactly where that will take her she doesn’t know. She can see herself as a rural pastor but also wants to pursue something in mission work, trying to build relationships with other people nationally or internationally. Social work is also intriguing to her after spending part of her YAV year working with children.

These realizations have guided Alyson into seminary school, a place she didn’t consider when she graduated college but a place that now, thanks to the YAV program, totally aligns with her goals.

“I really didn’t expect to come to seminary but in some cases it feels like it makes sense,” she said. “Even when I was studying business I knew that I did care about taking care for people. It just took a different turn than I expected but it makes sense in the long run.”