Some relationships can stand the test of time, and any other obstacles that come their way. And even when there’s something that could break them apart, the love and respect they have for each other won’t allow for that “something” to separate them. 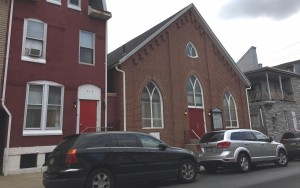 Washington Presbyterian Church sits nestled between row homes in Reading. The church is in need of a handicap accessible ramp and its long-time friends at First Presbyterian Church, as well as Lehigh Presbytery, are helping with the project.

“Washington is an African-American church and First Church was, in their day, a very, very affluent downtown Presbyterian church,” explained Marsha Heimann, a Ruling Elder and Stated Clerk at Lehigh Presbytery. “As I understand it, the people with money in Reading attended that church. They have a long history of generous mission work that was done in the downtown area by them. They reached out and literally took Washington under their wing many years ago.”

In 1823, the pastor of First Reading noticed that the black residents of the city had nowhere to worship. The church decided to donate a log cabin as part of a Sunday School mission, and the First African Presbyterian Church began on the corner of Washington and Mulberry streets. There were 20 members on that first Sunday and was the only place in the city where “colored people” could worship. Over the years, the church, which served as part of the Underground Railroad during the Civil War, has also served as a concert hall for famous black performers, hosted many Black History events and been a gathering place in the community.

That friendship and supporting hand haven’t stopped between the two congregations despite a dramatic drop in attendance at First Reading, which once boasted membership roles in excess of 1,000. Currently, First Reading has around 50 worshipers on a Sunday morning, a figure similar to what Washington is seeing on a weekly basis.

A major reason for the fall in attendance figures at First Reading is the congregation’s decision to leave the Presbyterian Church (U.S.A.) denomination in favor of the Evangelical Covenant Order of Presbyterians (ECO), a choice that caused a split between the worshipers. In mid-September, First Reading officially voted to leave the PCUSA, a process that only needs presbytery approval for it to be complete.

Despite the move out of the PCUSA, First Reading is committed to continuing its long-standing relationship with the Washington church.

“They refer to it as their mission,” Marsha said of First Reading. “For years they have been providing mission dollars to Washington. It’s very near and dear to the hearts of the people at First because they’ve re-incorporated quite a bit of future giving to them in the actual Terms of Agreement (separation from PCUSA) document. They’re not walking away from Washington by any means, they’re just walking away from PCUSA.”

An immediate need at Washington is wheelchair accessibility at the front of the church. Located in the middle of row-home-type housing, the building only has concrete steps at its front entrance, making it difficult for older worshipers to reach the sanctuary.

“They have several elderly members that are in wheelchairs,” Marsha said. “As with row homes, you have to walk up five or six steps just to get up to the landing that will then take you to the front door. These steps have been an obstacle for this congregation. They are literally carrying wheelchairs up the concrete steps every Sunday morning.”

The Washington congregation has been working to get the proper permits to put in a handicap ramp but has been constantly hitting obstacles. Marsha, as Stated Clerk of the presbytery, heard of this struggle while attending a session meeting at Washington. What she didn’t know at the time was how integral she was going to become in helping the congregation get its much-needed ramp.

A few weeks later, Marsha was attending a dismissal negotiating meeting with the Presbytery Engagement Team and the Special Committee of the Congregation from First Reading. As First Reading was discussing how it wanted to continue to financially support the Washington church after it left the PCUSA, something suddenly dawned on her.

“I realized there were people on the SCC who could help with this project,” she said. “Those committee people, as I’m looking around the table, are people who have connections and influence. There was an attorney there who knows how to navigate through the system. There was also an educator, banker, realtor, attorney, CEO and other professionals serving on the SCC.”

Marsha explained the need for a ramp at Washington to them and one by one they quickly volunteered their time and services to help get the needed paperwork filed for the ramp construction project to occur. One committee member was involved with the Helping Hands work team and offered to get the ramp construction on the team’s list of projects. And still others volunteered to reach into their pockets and help fund the task.

With the paperwork beginning to flow down the proper channels in the city of Reading, Helping Hands has put the ramp construction on its schedule for late fall, assuming everything is approved ahead of time. It’s clearly a project that couldn’t have gotten off the ground had it not been for some timely interaction and, frankly, divine intervention.

“Obviously (God) made me the middle man,” Marsha said humbly. “I go to a May session meeting, and then I come in on a June SCC meeting for the first time and I start realizing we can help one another here. That’s probably where I was put in the middle for a reason. And I’m finding that in lots of places within the presbytery. God put me in this job and God will get me through this job but he’s making me open my eyes while I’m here.”