Officially, one church on the 6400 block of Lansdowne Avenue in the Overbrook neighborhood of Philadelphia was destroyed by fire on Aug. 29. However, that blaze has left five congregations that met in the 104-year-old granite and limestone structure without a meeting place. 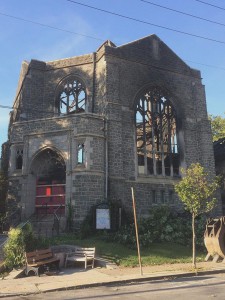 Only walls remain at Good Shepherd Church after a fire tore through the building in the Overbrook neighborhood of Philadelphia.

Fire ripped through Good Shepherd Presbyterian Church on that Monday morning, gutting the structure and leaving only stone walls in its wake. A cause of the blaze has not been determined but it is believed to have started in the basement. The Rev. J.B. Adams was at home when he received a call that his church building was on fire.

“As I was approaching about five blocks away I saw horrendous black smoke, so I knew it was already a disaster,” he recalled.

A manse was connected to the church building and was inhabited by people on the second and third floors, one of which was J.B.’s twin brother, Charles. He ran outside when he saw the smoke but did go back inside for his computer. Another person was in the shower when the electricity went out and was able to escape unharmed with the help of firefighters.

Despite only averaging about a dozen people at worship on Sunday mornings, Good Shepherd is studying options as it looks forward.

“That’s the big question,” J.B. said when asked about the building’s future. “This was a historic church but it wasn’t on the registry (of historic buildings). The report of the engineer is that the walls have to be torn down. That’s all that’s left – beautiful, strong walls – but the concern they have is the cement that holds the mortar was baked enough in the heat that they’re saying the walls have to come down.” 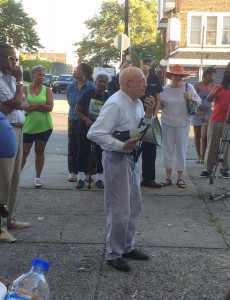 The Rev. J.B. Adams speaks during a prayer vigil that was held one day after his Good Shepherd Church was gutted by a fire.

This is the case for the sanctuary but J.B. is hoping that the adjacent education building’s walls will be spared. There is also an indoor swimming pool that hasn’t been used since the 1940s that might also have to be torn down. It raises some questions that no one has the answers to just yet.

“Because I have a masters in city planning, I’m as concerned for the neighborhood as I am the church,” J.B. said. “Should we do a community center there, save the swimming pool and the basketball court? We just don’t know. We have no idea what to do.”

The Presbytery of Philadelphia has set up an Administrative Care Team (ACT) that will walk with the Good Shepherd session as it considers the options before them. The presbytery has also set up a fund for donations to Good Shepherd. (Details below.)

“We will continue working with them to better understand their immediate needs,” said the Rev. Ruth Santana-Grace, the presbytery’s Executive Presbyter. “This was a tragic accident and we are grateful that no lives were lost. Good Shepherd has stood as a friend to its neighbors in that corner of Philadelphia.”

On Sunday mornings, Good Shepherd met in the building at 9:30 a.m. for a “classical” worship. At 11 a.m., Good Shepherd Evangelical Ministry followed with its more contemporary, Pentecostal ministry, which is being led by the Rev. Dr. Curtis Jones, a Presbyterian Church (U.S.A.) minister who was also preaching once a month at the earlier Presbyterian service. Those two congregations are now meeting together 10 blocks away at the Bible Way Baptist Church. The other three congregations to call Good Shepherd home were mostly “independent, storefront churches,” according to J.B., and are worshiping with local Baptist and United Church of Christ congregations.

A crowd gathers to offer support for Good Shepherd Church at a prayer vigil in Overbrook.

What exactly will become of the Good Shepherd Church and the congregations that called it home, no one is sure at this point. But J.B. knows that a greater power is in charge and will lead them down the right path.

“If we recognize that all things work together for good to them that love God who are called according to his purpose,” J.B. concluded, “it’s up to us to see what God’s call is in this.”

Note: Anyone wishing to donate funds to Good Shepherd Presbyterian Church can do so by sending a check to the Presbytery of Philadelphia, 915 E. Gowen Ave., Philadelphia, PA 19150. Checks should include “Good Shepherd” in the memo line.