Again Jesus said, “Peace be with you! As the Father has sent me, I am sending you.” 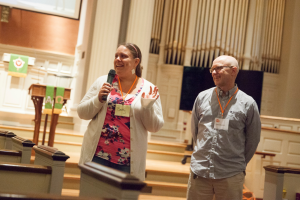 Becky Snavely is interviewed by the Rev. Don Hackett about her journey to be involved in foster care during the second annual SENT Festival at First Presbyterian Church of Lancaster.

That scripture is not only from John 20, it’s also the backbone to an annual conference at First Presbyterian Church of Lancaster, PA, that’s aimed at bringing people closer to God.

For the second straight year, First Lancaster held its SENT Festival in mid-September, bringing in close to 120 people to take part in a two-day program that was filled with workshops and guest speakers designed to meet the interests of its participants.

“The goal really is to get everyday people hearing and responding to the voice of God every day and every moment,” said the Rev. Don Hackett, the Pastor for Congregational Care and Missional Ventures at First Lancaster. “That’s what we feel like it means to be a follower of Jesus – just living in a responsive lifestyle and helping people cultivate that awareness and that excitement of partnering with God and things God’s doing all around us.”

Beginning on a Friday, the event officially concludes the next day, but Don urges everyone to attend worship on Sunday to complete the weekend-long experience.

“This year we took it right into Sunday, so the theme Sunday and some of the things offered Sunday are all part of the weekend,” Don said.

Designed specifically for the First Lancaster congregation but open to the public, the idea for the SENT Festival is part of the church’s mission focus. Don, who has been with First Lancaster for 19 years, came up with the idea after attending many mission conferences and feeling that they could be improved.

“I found them not really taking full advantage of the opportunities that were there,” Don explained. “Sometimes when you have a celebrity speaker, they tend to go long. Then they give you a notebook and you leave and you kinda forget what the speaker said and leave the notebook somewhere. 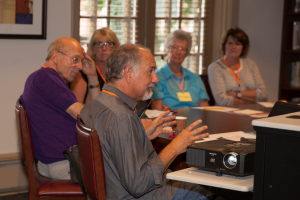 “I was realizing there was a lot of wisdom in the room sitting right next to me at different conferences that I would love to tap. We’re all there, we’re all practitioners, we’re all out there experimenting and learning.”

Don helped create the SENT Festival as a way of helping people learn about who they are and what they’re learning. He feels this strategy helps people get refocused as they continue their life journeys.

“For us, SENT is becoming our annual way as a congregation to listen and reflect as a primary engagement in the past year, either individually or in groups, and get recalibrated and a sense about where God is calling us next,” Don explained. “It’s probably more accurate to call it Missional Identity Conference. It helps people own and understand their own missional identity and then move out and engage in that in wonderful ways.”

Among the eight workshops that were available included “Poverty and Hunger Ministries,” “Prayer and Discernment,” “God’s Work in the World,” “Serving God in the Third Period of Life” and “New Approaches to Ministry.” (See the complete schedule here.)

“The purpose for SENT is for you to take time to listen to yourself and to God and create space for holy conversations,” Don said. “We don’t see this being done anywhere else, so we feel like we’re on the cutting edge here and we want to keep pushing and learning.”

There was a fee for the SENT Festival ($55 for adults, $40 for students), but a golf tournament helped underwrite the event. The goal, of course, is that the program will be self-supporting. 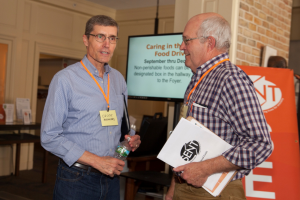 “These things are designed to pay for themselves and produce hopefully revenue for the church as well as a lot of fruit in terms of the Kingdom,” Don said.

In 2017, the focus of SENT will be storytelling, so many of the things the congregation does during that year will revolve around that theme.

“We’ll be highlighting the stories of people because we feel that the best metric for spiritual growth is someone’s story,” Don added. “If you hear someone’s story, you know exactly where they are.”

Ultimately, the goal of the SENT Festival is to help the church’s leadership better understand its congregation while also giving the people vital tools to go about their daily lives.

“As a leadership team, it helps us get more clarity about who we are and what we’re about,” Don said. “If you can engage a community in prayerful listening to God and each other, then what’s going to emerge is what’s appropriate for your context. We’re trying to develop tools that will help people do that individually as well as in groups.

“The benefit is, I think, people are becoming engaged. For people who have been involved in church all of their lives, they’re saying, ‘Wow, there’s more. I didn’t realize there was more.’”