Rachel Shussett has been to seven General Assemblies, having contributed to Presbyterians Today Magazine, the Presbyterian News Service and the Presbyterian Church (U.S.A.) there. She’s now employed at Pittsburgh Presbytery. Oh, and she’s only 22 years old. 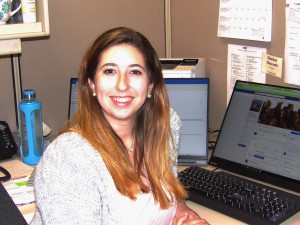 Rachel, a May 2016 graduate of Westminster College in New Wilmington, PA, is rapidly making her way through Presbyterian circles. And it shouldn’t come as a surprise to anyone that this is happening so quickly. Her father, the Rev. Dr. Steve Shussett, is a former Teaching Presbyter and Stated Clerk at Lehigh Presbytery and was a member of the General Assembly staff while her mother, Alicia, has been very active as an elder in the presbytery.

“I am the literal definition of a ‘cradle Presbyterian,’” Rachel said with a chuckle, “having grown up with my dad being a pastor. I was always very involved and it wasn’t in the sense that they forced me to be. They allowed me to grow into my own faith, which I think was a big advantage for me because it let me explore a little more and figure out what it meant to be a Presbyterian and be a Christian.”

Rachel’s connections included the Rev. Sheldon Sorge, the General Minister to Pittsburgh Presbytery. The Shussetts and Sorges lived in Louisville at the same time, and Rachel moved in with Sheldon’s family for a few weeks after her senior year at Westminster. With the retirement of Lana Dumrauf, there was an opening at the presbytery for an Administrative Assistant to the Stated Clerk. Sheldon offered the position to Rachel on a four-month temporary basis, but she liked the job so much that she applied for the position and was hired on a permanent basis in mid-September.

“Rachel brings with her a wonderful background of knowing and loving our church across its depth and breadth,” Sheldon said. “As a daughter of a Presbyterian pastor, then a national staff member in Louisville, and then a presbytery executive, Rachel has seen the church up close at its local, regional and national levels. She has interned with the national offices, and has attended seven General Assemblies. In addition, she is a graduate of one of our finest PCUSA colleges.

“Rachel brings with her love for and knowledge of the church also an insider’s knowledge of communications in the digital age. Her buoyant spirit cheers up everyone around her. What a wonderful gift she has already been for us, and we have barely started our journey together.”

Aside from answering phones and emails, Rachel manages the presbytery’s social media sites while working under Stated Clerk Carla Campbell and Brian Wallace, the Associate Minister for congregations in Pittsburgh’s North Branch.

“I work with him (Brian) on getting things together for that section of the presbytery as well as any projects he’s working on,” Rachel said. “That allows me to do some creative work, which is fun – some video editing, logo design, that type of thing.”

With a degree in Communications and Public Relations, Rachel hoped to join a non-profit organization where she could do public relations and digital design. Pittsburgh Presbytery certainly fits that mold for her, and she is looking to leave her mark there.

It’s a fit that seems to be working out well for both Rachel and the presbytery.

“God definitely had a very big hand in this,” she said. “I knew I wanted to move to Pittsburgh after I graduated. When I got here I didn’t really know what I would be doing. God definitely answered my prayers in allowing me to take this job and having it grow into something that’s become very meaningful to me.

“At first I was a little hesitant (about the job). I wasn’t sure what it would entail and part of me was worried that I would almost be wasting my degree with it but it turned out that I’m really using it in a lot of ways that I never anticipated and in ways that are very meaningful to me because it is impacting the church that I’ve grown up in and care so much about. That’s been a really cool thing for me to see and to see God working through that for both me and for everyone around me. His presence is just so strong here, and that’s been very cool.”