Forty-six years ago, the Rev. Richard “Dick” Baker had a vision. He saw a need to help create a presbytery that consisted of areas from three other presbyteries in eastern Ohio and the northern most part of West Virginia. That area would eventually become known as the Upper Ohio Valley Presbytery, and he would be its first Executive Presbyter, a position he would hold for 19 years. 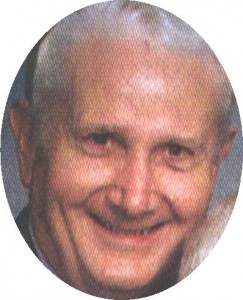 “He was a very gracious and wonderful person to work for,” said Donna Todd, his one and only secretary until he retired in 1992. “He always made you feel like what you had to offer was good. And not only me, but he did that for others. He worked hard with his ministers to make sure they were taken care of.”

Dick passed away on Wednesday, Sept. 7, at Sherwood Oaks Retirement Community in Cranberry Township near Pittsburgh. He was 89. Dick was named interim Executive Presbyter at the beginning of 1973 when churches from presbyteries in Steubenville, Muskingum Valley and West Virginia were merged into one region that would be called Upper Ohio Valley Presbytery. He was a mission field worker in that area before accepting the executive job.

“They didn’t think that we would be able to do anything because of crossing the (Ohio) river,” Donna recalled. “He worked with that and showed that they could. There were a lot of doubts in those days whether we could go across the river and administer to someone. He did a real good job of working with them to show them that this could work.”

The presbytery overwhelmingly voted to make him the full-time Executive Presbyter, a positon he held until retiring in 1992.

“He knew how to talk with people to make them feel a part of things and to want to take part in things,” Donna said. “He just had a nice way with that.”

During his time at Upper Ohio Valley, Dick helped start Presbyterian Media Mission. At the 1980 General Assembly meeting, an overture was passed asking presbyteries and their churches to do media mission. Dick and several other executives from southwestern Pennsylvania decided to create PMM as a regional way of meeting that request.

“Dick Baker was instrumental in that he and the rest of the executives knew that there was a possibility of doing some things together that they couldn’t do individually,” said Gregg Hartung, the current director of PMM. “The collegiality of it was able to be created amongst various leadership from different presbyteries. Dick was well respected within that group, like Harold Scott and Dick Sigler. I think Dick Baker had some keen insights in wanting to do some things in Upper Ohio Valley that provided fertile ground for even when he left.”

Gregg appreciated Dick’s ability to get his point across in a constructive way.

“He was really direct and honest. If he didn’t like something, you knew it,” Gregg said. “He was a very good, critical thinker. He didn’t put you down but he had you think through things so that you could make it the best you could possibly make something.”

Dick also served two years in the U.S. Army from 1945-47. A sergeant, he served nine months in Korea in 1946. Dick graduated from Whitworth College in Spokane, WA, in 1950. Dick pastored several churches in Colorado after graduating from San Francisco Seminary and obtained his doctorate from McCormick Theological Seminary.

Dick is survived by his wife Lila, of Sherwood Oaks Retirement Community, 100 Norman Drive, Cranberry Township, PA 16066; and two children: Holly Rassnick, who lives in the Pittsburgh area, and Kent, who lives in Phoenixville, PA. He was preceded in death by wife Shirley, whom he met in college. Dick met Lila at the retirement community. They were married for nearly 12 years.

A memorial service was held Saturday, Sept. 17, at Sherwood Oaks Retirement Community. Presiding pastor was the Rev. Dr. N. Graham Standish, Calvin Presbyterian Church, Zelienople, PA. In lieu of flowers, memorial donations may be made to Sherwood Oaks Retirement Community, 100 Norman Drive, Cranberry Township, PA 16066 in memory of Rev. Baker. Memo on the check should be to the “Employees’ Scholarship.”