The following is a written account from a youth and Pastor Kathy Hecht of Olivet Presbyterian Church in Prospect Park, PA, in the Presbytery of Philadelphia. The congregation’s youth group participated in The Philadelphia Project in July of 2016. A Synod of the Trinity Peacemaking Grant worth $800 helped Olivet fund the mission trip. To learn more about the Peacemaking Grant, click here. 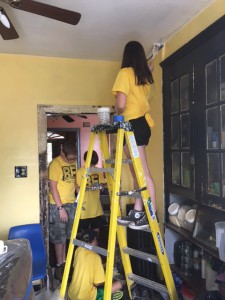 Here is a summary of the week’s schedule written by one of our youth:

“July 18-22, eight of Olivet’s Presbyterian members went on a mission trip called The Philadelphia Project thanks to the grant we received from the Synod. We arrived in the early afternoon on Sunday and left in the late morning on Friday. While there, we had two different groups doing two different projects during the daytime.

“One group of five went to a worksite assigned to them. They spent the week working on renovating a nearby homeowner’s kitchen. They scraped away old paint to be able to put fresh paint in the kitchen, they washed grime off of old light fixtures, cleaned dishes for the homeowners, spackled and painted the ceiling, and they fixed up the floor but did not get to repaint the room because there was a lot more paint to chip off then they thought. The group that came the next week picked up where they left off.

“The other three people were working in childcare. They spent the day playing with kids, making sure the kids were behaving, singing songs with them, learning with them about God’s armor – The Shield of Faith – and doing arts and crafts with them. The kids’ ages varied from about preschool to about fifth or sixth grade, and the program ran from 8:30 a.m. to 3 p.m. 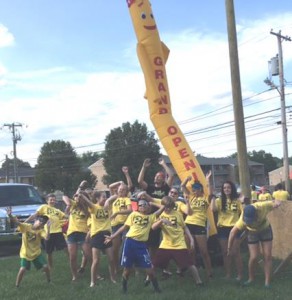 “At 6 p.m., all the churches there that week got together for dinner, then The Philadelphia Project had a worship service and sermon to tell us, and then we were split up into smaller groups based on our grade, and in there we went in depth more about the sermon. Wednesday night there was a free barbecue that we invited all the people we met that week to come and get some free food, which was good for those who may not have much food available to them. Friday we had a morning worship service and took some last few pictures, and then we headed home.”

As a leader, I observed this week was a life-changing one for our youth as they experienced serving the needy with their own hands, making friendships with others across racial and economic lines, and experiencing God’s presence in a fresh new way. We are thankful f to have had this opportunity and hope to continue to incorporate reaching out in missions as part of our everyday lives.