APCE honoring Forrest Palmer for lifetime of service and teaching 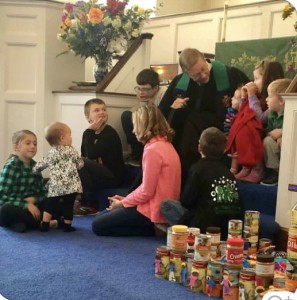 Forrest Palmer attended his first national Association of Presbyterian Church Educators meeting over 40 years ago. That conference and the association left a lasting impression on Forrest’s life.

“I first started attending their annual events (in 1976), and found that it was a wonderful community and a wonderful place to network with wonderful people,” he recalled. “I always learned something. They always had wonderful keynote speakers.”

“That kind of cut my teeth on the inner workings of the organization,” Forrest said of his time with the South Atlantic-Puerto Rico Region. “I could see the challenges before APCE as a cabinet member. The organization was in a state of transition to something. The challenges were that there were less and less educational ministry-type people in the five denominations that that association served, therefore the budget was decreasing, and the cabinet was huge in number.”

From 2013-15, Forrest served as president of the national APCE organization during a time of “great transition,” one that included the resignation of the then-current president due to health reasons and Forrest having to hit the ground running with shortened training. Forrest helped restructure APCE to “embrace more volunteerism from the local churches.” There was also a push to use technology more, especially regarding meetings that allowed people to attend online instead of face-to-face.

“We had to tread carefully,” Forrest recalled, “because there were members who were very tradition-oriented, as there are in any organization. It was a time of change and transition. I had to calm those who were anxious, steady the ship and guide it in a new direction. It was a challenging time to serve as president of APCE.”

Through Forrest’s leadership, APCE has been able to thrive as an organization. Forrest’s work will be celebrated at the national APCE meeting in Louisville, KY, from Jan. 31-Feb. 3 when he will be honored with the association’s Lifetime Achievement Award.

“It’s rather humbling,” Forrest said of the award. “I couldn’t speak for a couple minutes (after learning he was receiving the award). I was really taken back and just humbled by the whole announcement.”

The award doesn’t only honor a person’s time with APCE but also that person’s accomplishments outside of the association. Forrest has contributed to educational ministry throughout his entire life and has done so in several different ways. Among those instances is working as a Christian educator and in youth ministry with congregations in Staunton, VA; Tallahassee, FL; Belmont, NC; and Charlotte, NC. He began as a cluster educator/camp director at Massanetta Springs Conference Center in Harrisonburg, VA, taught religious education at Belmont Abbey College in North Carolina, and was also on the adjunct faculty at Columbia Theological Seminary in Decatur, GA. 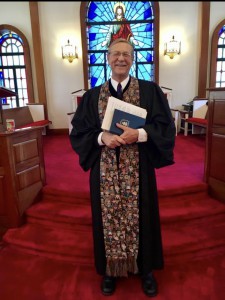 Forrest Palmer will be presented with the APCE’s Lifetime Achievement Award at its annual gathering.

In a nutshell, APCE consists of people who are serving or have served in educational ministries as ministers, professional or volunteer educators, or students. It serves five denominations [Presbyterian Church (U.S.A.), the Reformed Church in America, the Presbyterian Church in Canada, the Moravian Church in America and the Christian Reformed Church in North America] and has 14 regions throughout the United States and Canada. The East Region includes Pennsylvania and most of West Virginia and will hold its annual Spring Event on April 30-May 2 at Rhodes Grove Conference Center in Chambersburg, PA. The Great Lakes Region serves, among others, Ohio and meets yearly in the fall.

“APCE links together five denominations, focusing on educational ministry in the local church,” Forrest explained. “And that embraces youth ministry as well.”

Forrest retired from full-time service to the church at the end of 2015 but remains involved through his role as the assistant to the pastor at First Presbyterian Church of Dunbar, WV. Forrest and his wife, Barbara, enjoy traveling, especially to see their “grand-twin boys” in Georgia. He also dabbles in weather forecasting, being an advisor for Foot’s Forecast, which is a multi-state, collaborative approach to weather forecasting that brings together students, adults and professional meteorologists while utilizing social media and a web presence. Forrest is on the Tropical Weather Team and studies weather patterns developing in that Atlantic region.

“My undergraduate degree from Virginia Tech focused on the geo-sciences,” Forrest explained. “I was preparing for a career as a meteorologist or an oceanographer or something in the geo-science realm. It was during that time that NOAA (National Oceanic and Atmospheric Agency) had a forced hiring freeze. So, all along the Lord had been working through me and in me, tugging at me and nagging at me. I went to two weekends of theological inquiry and jumped into theological education in a seminary.

“That felt right. It felt good. I’m still able to use my sciences through the Foot’s Forecast organization. I’ve been a forecaster, an advisor, an officer, an outreach to students – and that’s a form of teaching also.”

Looking forward, Forrest will be involved with Presbyterian Disaster Assistance, serving on the National Response Team where he will work in emotional and spiritual support to those who have been affected by tragedies. He’s looking forward to completing PDA’s training and being deployed where needed in 2018. It’s all part of a life that has been spent serving others through preaching and, of course, teaching.

“I can reflect back to the very first inklings of a calling that occurred in a Sunday School class when I was a teenager,” Forrest recalled. “I always kept that in the back of my mind that it certainly was a part of God’s call when I was a collegiate and worked on the staff at Massanetta Springs Conference Center in Virginia. It’s been very clear that God continues to call me beyond the work years and into the retirement years. God’s call never ends. It has stayed with me and it has always just felt right.”