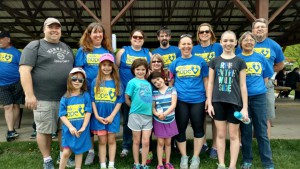 Worshipers from Monaghan Presbyterian Church participate in many fundraising efforts in support of New Hope Ministries, including the Walk For Hope.

It was 1982, and the social service agency in Dillsburg, PA, was taken away by the federal government, leaving that community in need of things like a food pantry, transportation assistance and emergency crisis services. A group of pastors from the area decided to band together to form New Hope Ministries that would replicate those programs. Three decades later New Hope has expanded into five other towns in southcentral Pennsylvania, serving close to 20,000 low-income people on an annual basis.

Longtime Monaghan Presbyterian Church pastor the Rev. Charlie Best was on the ground floor of the creation of New Hope Ministries, and this Dillsburg congregation continues to be a vital supporter of the initiative, which now also has assistance centers in Dover, Hanover, Lemoyne and Mechanicsburg. Charlie has since retired from Monaghan Church but in 2016 landed on New Hope’s board of directors for the first time.

“It’s helping people in need,” Charlie explained. “You’re concentrating on poverty and people in crisis. New Hope helps people get on their feet and become self-sustaining.”

“New Hope doesn’t come in unless they are invited to come in, and they’re at the place now where they’re not growing in geography because they can only do so much,” Charlie said.

The Mechanicsburg center is the hub of the food distribution because it has large refrigerators to keep the goods fresh. Trucks travel to the different centers where the food is made available to those communities. However, in the very near future, a large trailer will be purchased that will allow the people at those stops to walk through it to get their food instead of having a truck unloaded, goods displayed and then the truck reloaded with what’s left over each time and at each location.

Charlie feels the key to the success of New Hope Ministries has been its targeting of teenagers.

“What gets me is the children and youth programs,” he said. “They realized to get people out of poverty, you need to think long-term. You can’t just give food out and expect things to change. They literally are working on a multi-dimensional poverty scheme with health, education, social development and even spiritual growth. They start with prenatal and go up to the age of 18. They realize that if you don’t think about a person that long, it may be a generational thing, that they will just stay in poverty.

“One reason why the program for kids goes up to age 18 and is long-term is so that they don’t fall into the same pattern as perhaps their parents and grandparents have.”

The Rev. Janice Tiedeck, the current pastor at Monaghan Church, agrees that this form of education will make a difference in the community.

“They provide immediate needs,” she said. “There’s a food pantry, they have resources to help change people’s situations – it’s not just giving them a fish, it’s teaching them to fish.” 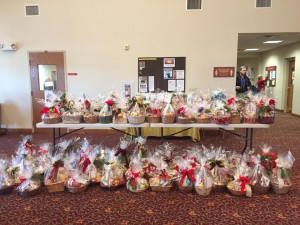 Some of the things being done with the youth are a weekend backpack food program, summer day camps and even training for things like job interviews. Childcare is also available at New Hope, allowing parents with children to participate in educational classes. Among the adult programming offered are ones that help people get their high-school equivalency degrees, become certified forklift drivers and even entry-level nursing.

“They do a lot with helping the person and not just giving them food,” Janice added.

“They were there from the beginning, so it’s definitely in their blood,” she said. “They would do anything to help New Hope.”

The Monaghan congregation comes together for a yearly fund drive, with proceeds going to New Hope that it in turn gives to the less fortunate to help pay their winter utility bills. The church also collects food, prepares Thanksgiving baskets and participates in New Hope’s Walk For Hope that raises funds for the organization. It also puts up a tree in its building for the Christmas Blessing Express, which has gift ideas hanging from its branches that the congregation then buys and donates to New Hope that they in turn make available to the community.

“Instead of adopting a specific family, they have churches in the area collect gifts in different categories, and then there’s a day in which the clients of New Hope can come and actually ‘shop’ and pick out gifts for each member of their family,” Janice explained.

“In Dillsburg, they’re changing lives,” Janice said. “They actually have less clients this year than they had the year before because they have really helped people change their circumstances. It takes some of the pressure off of the local church, too. If we all band together we can help people more completely.

“It shows what it really means to be the body of Christ. It started with ministers breaking down that bond of denominations and working together to put the community first – nobody getting singular credit, really living out that mission of love and service.”

And that “love” is not only felt by those that New Hope is reaching, but also by those who are doing the work.

“From the executive down to the volunteers, you see miracles happening in people’s lives,” Charlie concluded. “The staff doesn’t get paid big money and yet they stick in the job because of the fulfillment of knowing they are doing God’s work. It’s a great Christian social service.”