At 100, ‘ageless’ Agnes Peebles is a ‘Presbyterian treasure’

Agnes Peebles (in 1985 and current), who will turn 100 on Jan. 1, was an integral part of Christian education in the Synod of the Trinity region and beyond.

Jan. 1 is not only the start of a new year – and in 2020 it will also mark the beginning of a new decade – but it is also a milestone birthday for a woman who has donated much of her life to Christian education in the Synod of the Trinity region.

Agnes Peebles will celebrate her 100th birthday on New Year’s Day. A resident of Sherwood Oaks Retirement Community in Cranberry Township near Pittsburgh, Agnes is well-known throughout Presbyterian circles, having worked for the Synod of the Trinity from 1973-87 as a Christian educational consultant for the Presbyteries of Carlisle and Donegal. She taught in Synod Schools across the country and was an adjunct professor at Wilson College in Chambersburg, PA, for three years. In 1986, she was voted the Association of Presbyterian Church Educators (APCE) Educator of the Year.

“Agnes’ outstanding abilities as an educator are excelled only by the way she lives out her vibrant faith in Christ by generous, willing service to others,” it reads in a February 1986 Synod newsletter announcing the honor.

“Agnes Peebles is a Presbyterian treasure,” added the Rev. Dr. Graham Standish, who was Agnes’ pastor at Calvin Presbyterian Church in Zelienople, PA. “Most people aren’t aware of this, but Agnes has influenced the Presbyterian Church (U.S.A.) throughout her whole life. Whatever is positive about our denomination, especially in education, Agnes’ fingerprints are all over it.”

One person’s life Agnes specifically touched was the Rev. Cheryl Galan, who is the interim executive at the Presbytery of Carlisle and a former Christian educator at Derry Presbyterian Church in Hershey, PA. It was while she was at Derry Church that Cheryl came in contact with Agnes through the Synod’s Christian education program. It was partly because of those experiences that led to Cheryl’s 15-year career in Christian education before becoming a pastor. 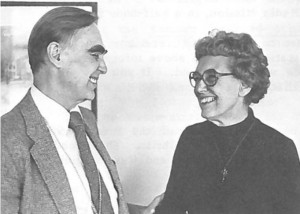 “As Agnes Peebles celebrates her 100th birthday, may we celebrate the sparkle in her eyes and the well-spring of faith in her soul, which impacted so many of us, through her service to Christ’s mission and the Church she so loves,” Cheryl said. “May we give thanks to God for her tireless advocacy for Christian educators and the ministry of Christian formation across generations. May our voices and actions draw strength and courage from her commitment to God’s work of peacemaking and justice in the world. May the creativity, love and open-heartedness with which she cultivated the leadership gifts in so many of us return to bless her abundantly!”

Agnes wrote study guides for the Kerygma Program, which is an adult Bible study that focuses on foundational courses for in-depth study of the whole Bible that also includes elective or shorter Bible studies focusing on a particular theme, topic or book of the Bible. Each course offers a resource book for participants and a leader’s guide, which Agnes helped write. She was also an APCE historian.

Agnes was called to the staff of the First Presbyterian Church in Geneva, NY, as an assistant in Christian education and as the church secretary. Three years later she moved to Covenant-Central Presbyterian Church in Williamsport, PA. She was selected to be part of a team that traveled the country in response to congregations’ needs to upgrade Christian education programs. She would eventually spend 13 years on the Board of Christian Education and assisted in developing leadership materials. During those years in Philadelphia, she was appointed vice moderator of the Synod.

Agnes recently helped Beaver-Butler Presbytery compile historical data for all of the churches in the presbytery that have either closed or are no longer part of the presbytery. She was honored in March of 2019 for her efforts with this project. She also continues to be active in her home church in Zelienople.

“As senior pastor of Calvin Church for 22 years, where Agnes has been a member and elder,” Graham said, “I experienced and appreciated her amazing influence in helping us transform from a declining congregation to a thriving and growing one. She has always had such tremendous energy, insight, wisdom, creativity, faith and authenticity. At 100 years old, she is still a force of grace in the church and her community. Her years say she’s 100, but she is truly ageless.” 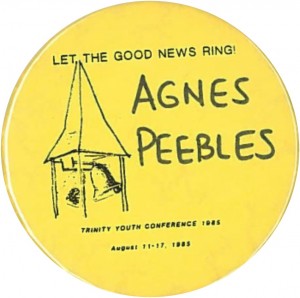 A button from the Synod’s archives advertises the Synod of the Trinity’s Youth Conference in 1985, of which Agnes Peebles was an integral part.

Born and raised on a farm in Lawrence County, PA, Agnes is a graduate of Penn State University who majored in sociology and English and later completed a major in secondary education. During her college years, Agnes was active in the Westminster Foundation and was a member of a work camp in West Virginia where her team conducted a summer-long camp for coal miners’ children. The next summer was spent with New York City children at a camp in the Catskills.

In addition to her farm skills of driving tractors and a team of horses, she was a summer farmhand during the World War II work shortage. She served at Mars (PA) Children’s Home as an assistant caregiver for boys, then taught high-school English, civics, political science, coached the girls’ basketball and volleyball teams, directed class plays and operettas, led a Girl Scout troop and taught an after-hours typing class.

Card showers are being organized by both the Beaver-Butler Presbytery and APCE. Cards can be sent to Agnes at the address below.