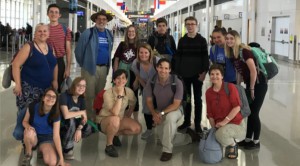 This group of adults and youth from Pittsburgh Presbytery spent two weeks in Malawi enjoying the culture and interacting with their brothers and sisters from Africa.

Dave Carver has been to Malawi, Africa, more than a dozen times. But when the pastor at First United Presbyterian Church of Crafton Heights, PA, made the return excursion with 13 others from Pittsburgh Presbytery in July, there was certainly a different feel this time.

Aside from the Crafton Heights church, the Bower Hill, Sewickley, East Liberty and Sampson’s Mills congregations were also represented. Of the 14 people who participated in the 2019 Youth Pilgrimage to Malawi from five area Presbyterian congregations, nine were young people between the ages of 13-16.

“It’s not very typical for us to have so many youth participants,” Dave explained. “This was a real departure from our norm. Our partners asked for it (the youth).

“Too often when our African visitors come to visit Pittsburgh Presbytery, they are in congregations that are aging. We’re Presbyterians, so we’ve got a lot of older folks. The younger folks have a different view and a different set of energies that they can bring. Many of our African colleagues just hadn’t had the opportunity to interact with a lot of American young people. When we travel to Malawi with a bunch of retirees, it’s hard for those young people there to engage. And when they come here, they meet a lot of retirees and it’s hard to see the future of the church.”

On Christmas Day in 2016, Dave took a handful of youth from the Crafton Heights congregation. The response from the Malawians was very positive as they enjoyed interacting with younger missionaries from the United States. With the average age of a Malawian being 15, having younger Americans along for the mission trip had a greater connection for their African friends.

“It was really a gift for the kids that were with me,” Dave recalled. “The folks in Malawi were really impressed and blessed by the opportunity to be with young people. So, we thought it would be good to broaden that. What we’d really love is to see some African youth be able to travel here but the difficulty for folks getting visas to travel is a little overwhelming.”

Pittsburgh Presbytery has a long-standing covenant with the Synod of Blantyre in Malawi, and in 2013 the South Sudan Presbyterian Evangelical Church was brought into that relationship and the tripartite partnership was born. On odd numbered years, Pittsburgh Presbytery sends a team of missionaries to travel to Malawi to experience their culture and build relationships. Often, visitors from Pittsburgh are joined by colleagues from South Sudan on these trips. In turn, the African churches send delegates to Pittsburgh on the even years to observe the same. 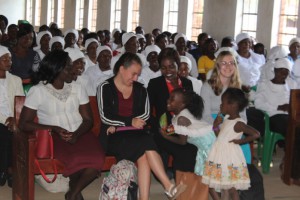 The American youth were quick to make friends with their Malawian neighbors.

When a group of young people from the USA thinks about going on a “mission trip” to somewhere in the world, the focus is often on what the team will do: build an orphanage, lead a Bible School, and so on. Tasks like that are often important, but that just wasn’t the goal of this year’s trip. This team was built around the notion of “pilgrimage,” which the team defined as the leaving behind of that which is familiar and entering into a place that is new and different with the expectation of seeing God at work there.

“The purpose was to allow young people to join an intentional community that would make a significant and purposeful journey away from that which they have known and have found comfortable into a place where there may be some difficulty and clearly some different circumstances that they’re used to,” Dave said, explaining this year’s trip. “We wanted them to look for and to listen for what God is doing and where God is active in that place to the end that they might be able to come home and re-engage in their lives here with a wider sense of purpose, a deeper sense of discipleship and a greater sense of call for God in their lives.

“There were lots of places where kids came and brushed up against the Holy (Spirit). These were 13- to 16-year-old young people. The kids felt the ability to walk toward their fear. The kids asked some big questions. God was really in the midst of some of the small conversations that we had.”

The 2019 trip included plenty of group development for the youth, which focused on things like leading devotions. The African hosts also developed three workshops with Malawian youth aimed at connecting them with their American visitors, with topics ranging from stress and anxiety to suicide. Small-group discussions followed that helped each nationality better understand the other’s circumstances back home and “share perspectives of those issues and where and how the church and their faith interact with and intersect with those kinds of issues in the lives of typical American and Malawian teens,” Dave said.

As a large group, the Americans were able to visit the Malawian churches’ mission stations like the Mulanje Mission Hospital and the Synod of Blantyre university and radio station. And for several days, those on the trip were able to spend time in the homes and experience the cuisine of members from their Malawian sister church. 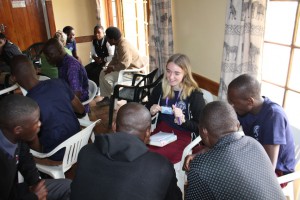 American youth took part in many activities in Malawi, including leading Bible studies.

“I met some of the most amazing and friendly people during my trip to Malawi,” said Danielle Sites, one of the youths on the trip. “Having the chance to stay with some of the families was such a great experience. I learned how to make Nsima, which is a traditional staple food in Malawi, from my host family. I learned that we might live very differently but we also have so much in common. This trip has made me want to be a better person.”

The changes in the youth from the trip have already been felt back home by their parents.

“Delaney learned and grew so much on this journey both spiritually and personally,” said Susan Williamson, whose daughter traveled to Malawi. “She returned with a greater understanding of the world around her as well as a greater understanding of her place in the world. She did a lot of soul searching and made some big life changes based on what she experienced. As time goes on more and more stories are shared and every time she talks about the people she met and the experiences, the pure joy she feels is so obvious. This trip was such a blessing and an answer to many prayers. I am one grateful mom.”

Karen Sites added, “Danielle and I have had some great talks since her trip. I’ve made a point of just letting them happen. We went to Erie (recently) and had such a good talk about the trip and how she is the Christian she is supposed to be, and she will learn and grow. And God wanted her specifically to go to Africa because he has plans for her. I see changes in her since she’s been back… and she seems so much happier.”

Having the youth bring back what they experienced and be able to make a different at home is the key.

“Our hope is that some of the effects of this trip will percolate into the ins and outs of these local congregations,” Dave said, “that there’ll be more young people and more other folks who will be interested in and see that kind of travel is advisable and attainable in their own lives, that they might themselves be open to this kind of experience.” 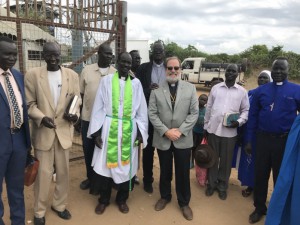 Dave Carver stands with fellow leaders of the church at the United Nations Protection of Civilians Camp in South Sudan.