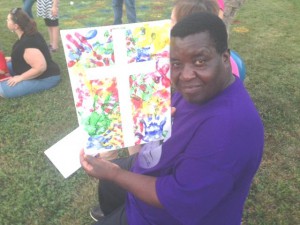 Abusa (Rev.) Alex Maulana holds up a painting he received from youth at Crestview Community Church during his visit to the U.S.

Abusa (Rev.) Alex Benson Maulana came to the United States wanting to experience a rural American church rather than urban churches, which he had experienced on two previous trips to the States. So Gregg Hartung took Alex, who serves as the General Secretary of the Synod of Blantyre CCAP in Malawi, Africa, to Crestview Community Church, a PCUSA congregation where Gregg is an elder.

“I picked him up at the dorm he was staying in at the college for the (New Wilmington Missionary) conference with fellow Elder Pam Merry, who is also from the Crestview congregation,” Gregg said, describing the 45-minute drive from New Wilmington to the small southern Butler County community of Callery where Crestview Church is located.

“The main goal of Malawi pastors and lay leaders visiting America,” Alex added, “is to learn!”

“We really do learn from one another about this wonderful world God has given us,” he said. 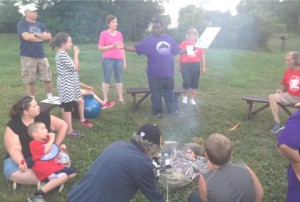 Abusa Alex talks during a Kids’ Club/VBS program at Crestview.

Alex attended the New Wilmington Mission Conference with fellow travelers from Malawi and South Sudan in Africa and has been emphasizing rural church ministry in Malawi. Chiphoola Church CCAP in Malawi is a rural church outside of the city of Zomba and has a partnership with Crestview Church, which is located just north of Pittsburgh in Beaver-Butler Presbytery.

That Wednesday evening at Crestview Church was the last of the church’s six-week series of Wednesday evening Kids’ Club/VBS programs for the summer. Alex said it took him back to recall his own ministry because he started out as a youth minister. He was impressed with how Crestview leadership used a large video screen to have the youth learn about God and the message through song and word. Leaders interacted with the video presentations and youth in sharing about God’s love for all people.

At a campfire that included several activities, games and the eating of smores, the youth presented Alex with a cross made from dipping their hands in paint, then placing them on a canvass.

Similar activities followed later in the week as Alex joined families of the Crestview Church for meals at restaurants and homes, and he visited one of the TV production studios that Presbyterian Media Mission used to create several videos on Malawi. He also saw first-hand one of the missions Crestview supports locally called Pine Valley Camp, which specializes in opportunities for inner-city youth from Pittsburgh to be in the country. 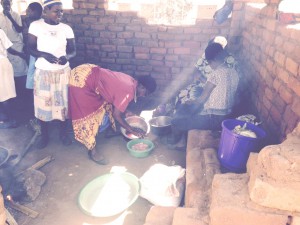 Alex also led a joint women’s and men’s Bible Study at Crestview and preached during Sunday worship there while staying at the home of Gregg, who is the mayor of Mars and the director of Presbyterian Media Mission, the night before he departed for Washington D.C. to begin his journey back to Malawi.

Crestview contributes to funding a Saturday feeding program that Pastor Goossen and Gregg experienced first-hand last year. (Read about Gregg’s trip here.) More than 70 children enjoyed a meal cooked at Chiphoola Church. The Women’s Guild that does many different community projects in the Malawian Church prepares the meal each week.

“It is amazing to see this type of mission up-close and in-person,” Pastor Goossen said.

“The benefits of the partnership go beyond worshiping and visiting one another’s countries,” Alex concluded.