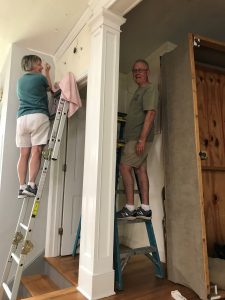 Enslow Park Presbyterian Church used some of its PPP loan to hire church members and others from the community to do repairs to the church.

Most congregations faced uncharted waters in mid-March when mandates from the coronavirus pandemic resulted in closed doors for communities of faith. Enslow Park Presbyterian Church in West Virginia was no different, but it also had a few other circumstances to deal with. A new pastor was scheduled to take the pulpit for the first time at the end of March, and the church’s preschool staff was laid off due to the pandemic.

Figuring out how to connect with a church body he was still getting to know became the top priority for Pastor John Yeager, C.P., who had served at nearby Eleanor Presbyterian Church for the previous five years. There were also some deferred maintenance problems with the Enslow Park Church building John found that needed immediate attention, and the situation with the preschool was another thing that required careful deliberation.

Six months later, Enslow Park Church remains on its feet, having returned to in-person worship on Aug. 23 while still livestreaming on Facebook and sharing recorded messages on its YouTube channel developed by Rodrigo Almeida, the church’s Outreach Coordinator. Extra financial contributions from members have enabled the church to improve its video capability during the past six months, and it has resulted in up to 125 people viewing online, which is about three times more than what had been the church’s weekly in-person attendance.

“I had only preached to stuffed animals inside the sanctuary,” John said with a chuckle. “The numbers have been encouraging.”

Part of John’s weekly message on YouTube was asking people to pray daily at 7 p.m. (19:00 in military time for COVID-19). It’s part of an online presence that also included a concert with a world-class pianist and organist as well as the “Kingdom Kids” program, a Sunday school-type outreach that involves reading books, puppet shows and prayer.

“We try to find different ways to reach out,” said Michelly Frizao, the co-chair of the church’s Christian Education team. “We talk with the kids about what they are going through right now without school and without being with their friends. We bring happy moments to the prayers.”

A Wednesday night online adult Bible study that started in late April is another weekly online presence that is available through Enslow Park Church.

“It’s been one of the high points of my week,” John said. “We never thought to do anything like this on Zoom. And they want to keep doing this on Zoom.

“This goes back to our Christian roots. Where did people meet? They met in people’s homes. It’s interesting that with technology we’re able to do that in a different way.”

While these ministries are being projected into people’s homes, there was still plenty going on back in the church building – and much of it wasn’t good. An inspection revealed that a disconnected sewer line near the preschool had not been capped, two of the church’s six sump pumps were not working, several drain lines were blocked, and water was leaking freely through an unsealed wall. It was later found that water was being trapped under a tile floor, making immediate replacement necessary.

“The basement had a lot of water damage over the years,” said Paul Foard, the chair of the Building and Grounds Committee at the church, which is located near Four Pole Creek, making it a constant flooding hazard. “It’s below the water table and periodically ground water will leak into the basement. It seeped under the floor tiles and created whatever likes to grow in dark, damp places underneath.” 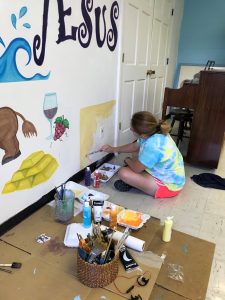 Enslow Park Church applied for and received a $36,000 PPP (Paycheck Protection Program) loan from the government, $20,000 of which went to pay the utilities and salaries of the church’s five-member staff.

“For us, it has not been the ‘Paycheck Protection Program,’ it has been the ‘People, Projects and Prayer’ program,” John said.

The remainder of the PPP loan was designated for salaries lost by the staff of the preschool that had to be closed because of the coronavirus. By the time the loan came through, those staff were already receiving unemployment checks at a higher rate than what the PPP loan was covering. At the suggestion of the church’s loan officer, Enslow Park Church used the rest of the PPP loan to hire 12 new employees to help with the building repairs.

Being able to plan ahead has been an important key for Enslow Park Church. As the coronavirus spread closer to home, the church formulated a special COVID-19 Task Force led by Susan Fabry. It included all of the leaders from the church’s committees and helped the church make the decision to not hold in-person worship as early as March 15, making it one of the first in the Huntington, WV, area to close its doors.

“It was a good decision,” Susan said. “One of our staunch church members who would have been to church on the 15th ended up in the ICU on a ventilator because of COVID. He probably would have been there. Who knows who he would have exposed?”

The task force has used recommendations from the Centers for Disease Control and Prevention and the Presbytery of West Virginia to create a five-page packet that outlines the proper protocols on Sunday mornings. It details how the church will hold in-person worship, something that was also done through a video that people can watch to better understand the guidelines that will take place on a weekly basis. One stipulation is that people remain in their cars when they arrive at church until a greeter motions them to enter, thus keeping social distancing measures intact.

“We had our task force be actors for the video,” added Debbie Yeager, the pastor’s wife and member of the Building and Grounds team. “They went through the whole process. It gives you a great visual for someone who’s anxious and maybe not sure what to do.”

Through things like this video, the church body is staying up to date with what is going on, and that inclusiveness has been a huge benefit for everyone.

“We’ve been including them in the process, and I think that has made a big difference,” Susan said.

These efforts are continuing a recent trend of unity that the congregation has been fostering since it entered a year-and-a-half period of pulpit supply pastors and began pulling together. It came to the forefront when several church members volunteered their time to join forces with unemployed outside workers to conduct repairs at the church.

“That brought us together amazingly,” Debbie said. “We had folks there that were not Presbyterian. We had Baptists, Catholics, Methodists, atheists – a lot of different folks from different faith backgrounds and different nationalities. Coming together to work on this in this COVID time, we heard laughter, joy, people having a moment with other people to share and work together. It was a joy for me to behold how everybody worked together.”

Now that the church’s basement is being renovated, a local Narcotics Anonymous group is planning to hold regular meetings there in the future. Enslow Park Church will also be hosting an outdoor Day of Prayer for the Nation event in late September with other Presbyterian churches in the area. These are just examples of how when a group of people band together they can be a part of great things.

“We’ve seen this whole thing as an opportunity, not a constraint,” John said. “And that’s just God getting our attention along the way.” 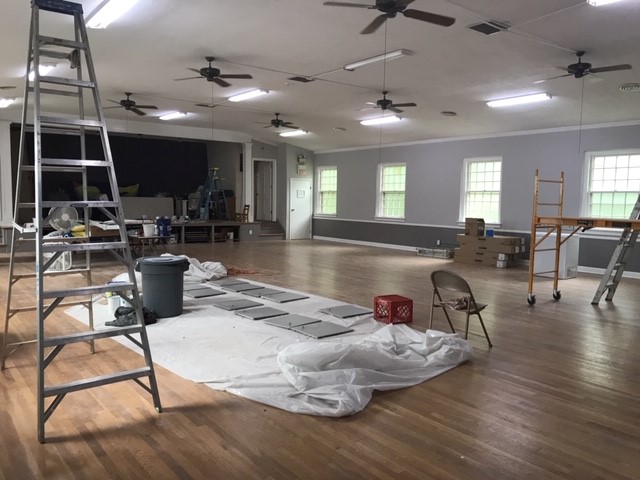 Enslow Park Church used a portion of its PPP loan to hire 12 new employees to help with building repairs.