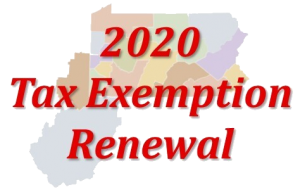 Prior to the coronavirus outbreak and government mandated shutdowns, the Synod’s Sales Tax Exemption renewal, which includes the churches and presbyteries under its umbrella, was being processed by the Department of Revenue. They were due to be renewed and mailed out prior to expiration of the current exemption certificates which is March 31. However, because of the mandated work shutdowns, the Department of Revenue offices and call center are both closed.

We did hear back from the Department of Revenue that because of the closures, all existing sales tax exemption certificate expiration dates are being extended until Dec. 31 (original extension was until Sept. 30). As the Synod has been receiving the renewed certificates, we have been emailing them to the corresponding congregations.

In the meantime, the state has issued an extension letter that can be used until new certificates are received. It can be downloaded here.