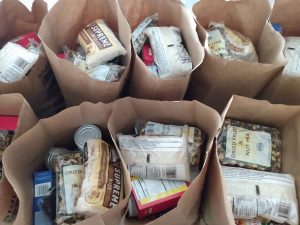 Valley United Presbyterian Church in Waverly, NY, through local aid, purchased 2,000 bags of food, resulting in more than 54,000 meals that were handed out in the community during the early stages of the coronavirus pandemic.

The congregations had been sharing summer worship opportunities since 2012, thus the easy decision to merge two years later. A vote during the 223rd General Assembly (2018) of the Presbyterian Church (U.S.A.) adjusted the boundaries of Lackawanna Presbytery and the Synod of the Trinity to grant Valley United membership. Despite all the history and close proximity of the three original congregations, the merged church was still trying to find its niche in the community.

In the spring of 2020, the coronavirus pandemic hit cities and towns across the country and world. People were and are still out of work, and life as we knew it has drastically changed. Communities continue to search for organizations to step up in their time of need, and in Waverly, NY – with neighbors in Athens and Sayre, PA, in mind – Valley United Church has been rising up to provide that outreach, supplying everything from weekly drive-thru food giveaways to gift cards for those who are out of work.

“One of the things we wanted to do after merging the churches, selling the buildings, building a building and moving was make a name for ourselves in this community,” said Pastor Sharan Knoell. “We were looking for an identity. The point of this was not to further the church. The point was to help the community, but I’m hoping that through all of this we are going to come out as ‘they are the church that help people when the really need it.’”

Thanks to $12,000 split evenly from Presbyterian Disaster Assistance and the Tioga County (NY) Foundations Coalition Emergency Fund, Valley United Church has been able to offer meals and gift cards to its community. A chunk of those funds helped purchase 2,000 bags of food that resulted in the weekly distribution of a total of 54,000 meals from late March to late May.

The first two handouts were funded by the Waverly Chow for Children organization, which includes many members from Valley United Church. (This Chow for Children and the one across the Pennsylvania border in Sayre-Athens were both started by the congregations that now make up Valley United Church.) By week 3, the congregation took over, using the funds it had received from the Tioga County Coalition to buy the food.

“It was God-blessed and God-designed from the beginning,” Sharan said of the outreach. “When this pot of money ran out, we found another pot. God kept this going for two and a half months.” 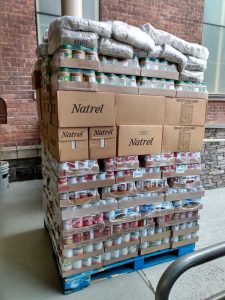 By the end of May, in part due to the mandates and protocols that became stricter and stricter because of the coronavirus pandemic, many of the volunteers began to become worn out and weren’t as available to assist in the ministry. Plus, with the weather getting warmer, there was a concern about some of the leftover food items spoiling from week to week. A final handout occurred at the end of June to deplete the church’s food items, thus paving the way for another outreach.

“Initially we though COVID was going to last for two weeks,” Sharan said. “We thought we could continue the food giveaways through the summer at the most, then COVID would be over and we’d be back to normal. Then once we realized around the beginning of May that this is getting worse and COVID isn’t going away, we started to panic about thinking long-term. We realized the weekly food giveaways were not sustainable, so that’s why we moved to the gift cards.”

What remained from the funds went toward the purchase of $100 grocery store gift cards. The church reached out to non-essential businesses like salons and locally owned restaurants that had to either lay off or furlough their employees, making available the gift cards to those workers.

“(Gift cards) are way less labor-intensive,” explained Sharan, who added that the local food bank kept the food distribution program going when Valley United stopped. “It’s something that we don’t have to worry about the canned tomatoes spoiling. These are gift cards and we can keep this going for the next six months to a year, depending on the need and how long COVID is bad.”

While these types of outreaches are slightly different for Valley United Church, distributing food is not. It has been involved with the Chow programs, a mobile food pantry and with quarterly community dinners, but nothing of this magnitude before.

“Supplying food for those in need was not new for us, but we had never done this weekly drive-through, food giveaway,” Sharan added. “The volunteers who were working with it week after week after week, they didn’t expect any recognition, they didn’t care if anybody knew they were there doing it. It was the right thing to do because people need help and that’s what we’re supposed to do as Christians.

“They consider it part of their Christian service. The stress that pastors are feeling in a pandemic, it just restores the hope that there are good people out there and we are going to get through this.”

Valley United Church will continue assisting with the Chow for Children ministries and hosting a quarterly dinner, an outreach that also includes five other local churches. Sharan was told that there may be more funding available through the Tioga County Coalition if they wish to continue distributing gift cards. It’s something they’ll consider as the fall approaches.

“It’s hard to plan in advance because COVID is changing every week,” she said. “They’re predicting this second wave is going to get bad in the fall-winter during cold and flu season, I don’t know where we’ll be at that point. It’s so hard to plan ahead because we don’t know what COVID’s going to do.

“The need for food is still there, even though people are returning to work. The folks who needed food before COVID are still going to need food after COVID.”

Regardless of the need, Sharan is confident her congregation – and the surrounding community – will be ready when called upon. That was evident when a call from the church came out for plastic bags and egg cartons and the bin outside the church building was overflowing every day.

“We also got a couple thousand dollars in donations, including gifts from people who are not associated with the church,” Sharan recalled. “I don’t know how they found out about it, but the larger community really responded. Volunteers came from other churches. One of the churches put together hygiene bags, so we handed those out, too.

If Sharan had to sum up how her congregation has rallied together during this trying time, it would be simply “God provides.”

“When the rubber meets the road, (the congregation) jumped right into action,” she said. “God provided for this for 10 or 12 weeks. We just kept going by faith because nobody knew in April what the future of COVID was going to be. God continues to provide. It just keeps falling in our laps, and when that happens, I know it’s God.”