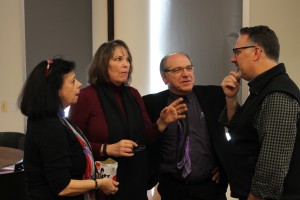 Author Tod Bolsinger, right, shares a moment with, from left, Ruth Santana-Grace (executive presbyter of the Presbytery of Philadelphia), Susan Faye Wonderland (transitional executive of the Synod of the Trinity) and the Rev. Jack Haberer (pastor at the First Presbyterian Church of Allentown, PA).

In order to be better prepared for the future, sometimes you must look at the past. For the Rev. Dr. Tod Bolsinger, he goes back two centuries to try to figure out how to cope with the future.

The author of “Canoeing the Mountains: Christian Leadership in Uncharted Territory,” Tod draws a stark comparison between the leadership style many churches use and the Lewis and Clark expedition of 1804. The explorers, as instructed by President Thomas Jefferson, were seeking a water route to the Pacific Ocean. Canoeing up the Missouri River, Lewis and Clark found the Lemhi Pass and assumed the waterway they were seeking was just around the bend. Instead, they were confronted with the mighty Rocky Mountains, an obstacle they were warned about many times by boatmate Sacagawea but chose to ignore.

“The story of the Corps of Discovery is the driving metaphor for our present moment in history,” Tod wrote in his book. “In every field, in every business, every organization, leaders are rapidly coming to the awareness that the world in front of us is radically different from everything behind us.”

An ordained Presbyterian pastor and vice president and chief of leadership formation at Fuller Theological Seminary in Pasadena, CA, Tod presented his thoughts in late February at the United Lutheran Seminary in Philadelphia. An estimated 200-plus people turned out for the event, which was sponsored by the Ministry and Leadership Incubator of the Presbytery of Philadelphia as well as the United Lutheran Seminary and the Southeastern Pennsylvania Synod of the Evangelical Lutheran Church in America.

“When I read it the first time, I was struck by not only the spirit and knowledge that framed Lewis and Clark on their expedition to the west,” said the Rev. Ruth Santana-Grace, the executive presbyter of the Presbytery of Philadelphia, “but that they understood the importance of engaging a person who understood that uncharted territory – Sacagawea – reminding us that we need to adapt not only our strategies but the way we engage the other – that are not our own, that do not look or sound like us – along the way. I love how the Rev. Dr. Tod Bolsinger has introduced this paradigm that works across theologies, denominations, cultures and races.”

“The large crowd was more than a good ecumenical partnership,” added the Rev. Bill Carter, the pastor at the First Presbyterian Church of Clarks Summit, PA, who also attended the event. “It was a clear reminder that every Christian church is paddling upstream these days. All of us are in similar boats – and then we realize that the boats won’t carry us over the jagged peaks of our new context.”

Tod was quick to point out that leaders must reinvent themselves in this day and age if they are going to be effective.

“A changing world requires us to learn to lead all over again,” he said. “We have to spend our lifetime being learners if we’re going to be leaders.

“The most important thing is staying in a context recognizing that leadership is going to make you learn and the biggest thing you bring to leadership is your learning. People learn leading while they’re leading. Believing that in the midst of the challenge is actually the transformation that you need but that you’re going to have to stay humble in it. We tend to get brittle and hardened instead of open to more of a change.”

A complete page of resources, including audio clips from the event and Tod’s PowerPoint presentation, are available here.

Tod regularly used humor, emotion and real-life experiences to relate to his points throughout the presentation in Philadelphia and often drew from the Lewis and Clark exploration to explain his thinking.

The Rev. Beth Utley, the stated clerk at Lehigh Presbytery, enjoyed how Tod linked the Lewis and Clark expedition to leadership in today’s world.

“The Canoeing the Mountains event struck the perfect tone of hope and challenge,” she said. “I find the metaphor of adventure to be helpful language to communicate the challenges of ministry today with the members of Christ’s church… people who struggle to share all that they love about the practice of faith in today’s context.”

“I also appreciated the discussion around skills that we as leaders need to guide the process of transformation that must happen if we are to thrive.”

The key to effective leadership, if you ask Tod, is being willing to change. And that can be extremely difficult for many congregations that have been doing things the same way for years.

When implementing change, it’s necessary to have a strong leader, someone who will instill confidence in not only the group leading the change but also the body that the change is being recommended to.

“No one will follow you off the map if they don’t trust you on the map,” Tod said. 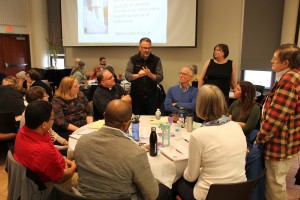 Tod Bolsinger chats with a table of attendees during an event at the United Lutheran Seminary in Philadelphia.

In most instances, when change is suggested, there’s going to be conflict from the body resisting the change. Tod used a crock pot analogy to describe how some pushback can actually be a positive thing.

“Think of a healthy conflict as steady, consistent heat,” he said. “You can’t cook a meal at 1 degree for 100 years. It will spoil. And if you cook it too fast, it will burn. It will leave you with a bitter taste you can’t get rid of.”

The hard part for the leader, Tod continued, is that he/she won’t always be able to judge how the suggested changes are being received. In fact, people will look to that leader, like a person looks at a flight attendant for their reaction when there is turbulence on an air plane, to see how things are going.

“As a leader, you don’t get to put your hand on a thermostat,” he said. “You are the thermostat.”

Tod also warned that leadership is a skill that’s not something that can be taught.

“You can be really experienced but find yourself in a leadership role and wonder why you’re failing,” he said. He added, quoting American philosopher and psychologist John Dewey, “You don’t learn by experiences, you learn by reflecting on experiences.”

The Rev. Greg Klimovitz, the associate presbyter at the Presbytery of Philadelphia, felt the large turnout showed just how important a conversation about leadership is to all faiths.

“The number of participants at this gathering speaks to the reality that our congregational and ministry leaders are eager to explore new terrain for gospel witness,” he said. “Even more, it was a reminder that we cannot journey alone, rather need one another across denominational lines, other categories of difference, and in shared neighborhoods as we adapt and innovate together. As we partnered with the Lutheran Synod and Seminary, our aim from the outset was to spark a shared conversation that just may open new avenues of possibilities to be God’s people in such a time as this. We believe we are well on our way.”

The Rev. Dr. Graham Robinson, a former member of the West Kensington Ministry Support Team and supply pastor of Aston Presbyterian Church who is presently serving as the national director of the Pre-Med Hospice Volunteer Program, was also grateful for Tod’s insight on this day.

“From Tod Bolsinger’s first quote, ‘Leadership is disappointing your own people at a rate they can absorb,’ it was clear this was not going to be your typical leadership event,” Graham said. “I appreciated how Bolsinger framed the challenge of ministry today. He said: ‘We were trained for a different context. We were trained for rivers, not mountains. And we need to learn a new way of leading.’

“Bolsinger was not pollyannish, he suggested that responsible church leadership today is akin to placing yourself in the blacksmith’s forge to be shaped by anvil, heat and hammer. Sharing his own journey it was clear that he had been touched by the hammer, but he wouldn’t have it any other way. Ultimately, I was encouraged by Bolsinger’s promise of what happens when a church and a leader strap on their hiking books in the mountains of ministry and work to meet the needs of their community. Bolsinger said: ‘Everybody will be changed (especially the leader).’ As I return to the challenge of strengthening disciples and fostering community and justice, I am grateful for a synod and presbytery that take reflection and growth of its members seriously.”

Tod reassured everyone in attendance that regardless of whether they are a leader or are a person being led down a new path, that despite what might be the Rocky Mountains in your view, put your trust in faith and everything will work out.

“Whatever uncharted territory you’re going into,” Tod said, “God is already there.”