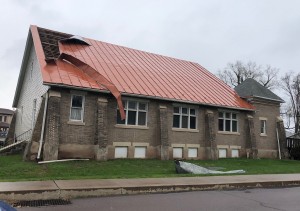 A tornado tore off part of the roof of the Benton Presbyterian Church in 2019, just one of several natural disasters the congregation has had to endure in its 100-plus-year history.

Benton Presbyterian Church in the Presbytery of Northumberland has experienced two floods and a tornado – all coming in the past decade. Now, in 2020, it’s the coronavirus pandemic that is the latest thing the congregation is trying to overcome to keep its ministries alive and well.

Resiliency and perseverance have become trademarks for this small, rural congregation in north-central Pennsylvania. But, along with the neighboring Presbyterian congregation in Raven Creek, the two have teamed up to maintain their energy and keep the Sunday messages flowing.

“We’ve remained small but pretty stable,” said Al Lumpkin, the moderator of both the Benton and Raven Creek churches. “The sense of family and being together has kept us from having that kind of feeling of discouragement. People have a presence and want to continue to provide a presence.”

Because both congregations, which averaged about 15-20 people for in-person worship prior to the pandemic, have mostly members who are in their 60s and older, there have been some technology hurdles to overcome. To reach every member during the initial stage of the pandemic, Al created mailings (both email and postal) that included sermons, reminders and encouragements from March to May when in-person services were strongly advised against.

Then, starting in mid-May, the team of Al and the Rev. Dr. Ron Shellhamer (who has been performing services at Raven Creek for the past five years) began holding outdoor parking lot services on Sundays. Now that some restrictions have been lifted, the Sunday schedule consists of in-person worship at Benton (with social distancing parameters in place, of course), followed by a drive-in service in the Raven Creek Church parking lot. Worshipers from both congregations, which are less than three miles apart, are welcome to attend whichever service they feel most comfortable.

“We’ve been trying to keep ourselves together in all of this,” said Al, who has been leading worship at Benton for 40 years and involved in similar planning at Raven Creek for the past 12. “The two congregations voted to hold joint services in this drive-in encounter. And now, we have two services – one’s inside at 9 o’clock, the other one’s the outdoor service at 10:15 – and we’re just going to have to take it week by week.”

The fact that the Benton Church building is still available – or even standing, for that matter – is a minor miracle in itself. In the fall of 2011 during Tropical Storm Lee, heavy rains flooded the structure, which sits across the street from the Benton Dam. Seven years later, flash flooding caused similar damage to the Benton building, so much so that a structural engineer said afterwards that he wasn’t certain it could survive another major flood because of all of the destruction done by the flood waters in recent years.

But that’s only part of the story of the Benton building. In August of 2019, a tornado ripped part of the roof off the building, the second time (the other was 1982) a tornado had touched down and tore apart the roof of the Benton Church. It’s the same building that survived Benton town two fires in three years in the early 1900s, the second of which tore through the structure and caused serious damage in 1913. 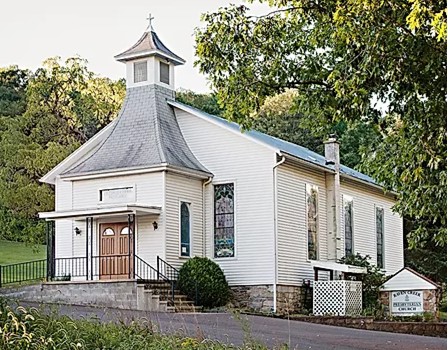 Raven Creek Presbyterian Church hosts outdoor drive-in services on Sunday mornings, which draws people from its own congregation as well as those from neighboring Benton.

Whenever the Benton congregation (a town church) went through a disaster, the Raven Creek (country church) congregation was always there to help them through it. It has made dealing with the coronavirus pandemic much more manageable for the two worshiping communities.

“There are some people in both of the congregations that would like us to do more jointly,” Al said. “A few people out in Raven Creek would enjoy having Benton people join them. Both churches are pretty confident that they’ll be able to continue and get back to their normal life.”

As long as the weather is warm, the current schedule of indoor and outdoor services works well for both churches. However, when the temperatures start to dip, it’s possible the two congregations will again turn to meeting in their own buildings. While it might make sense for the two churches that are similar in size and demographics to merge, Al doesn’t see that happening anytime soon.

“From time to time people have said shouldn’t the two churches talk about getting together?” he said. “My conviction has been that that only really works when that’s what the people want. The cultures of the two churches historically have been different. The two congregations have had a different history and a different culture, and I think they kind of cherish that.

“If there comes a time when a catastrophe like the flood would make the Benton Church uninhabitable, I think the congregations would reach out to one another, but right now the people are really committed to keeping their congregations alive. They are like spiritual families.

“As I look at these congregations and the people in the congregations, I think that those people who are there, this is their place. This is their family. And they would not want to be somewhere else. There is a real sense of identity that they have and a tradition as Presbyterians. That’s where they want to be.”

There may be a feeling that a divine spirit created Raven Creek in 1859 and a half-century later just down the road the Benton Church was born. Considering all of the unfortunate events surrounding the Benton building in the last several decades, it’s been a blessing that Raven Creek has been in existence to help out their neighbors.