Blue Christmas/Longest Night services help those who are grieving

The longest day of the year in 2015 is Dec. 22. That’s the winter solstice (or better known as the first day of winter) when due to the earth’s tilt, the sun is at its most southern point in the sky in the United States. It also means that on that day there is less sunlight and more darkness than any other day of the year.

For some, 2015 has been filled with darkness. They may have lost a loved one and are still coping with that death. Or maybe they received a diagnosis that is raising questions about the quality of their health going forward. Some others might be dealing with a divorce or shattered relationship or are concerned about their job situation or are just having financial problems.

With Christmas and New Year centered on family get-togethers, it can be a tough time for those who have lost loved ones – especially recently – or are dealing with personal struggles to find joy during the holiday season. Knowing that some of their members and others in the community are dealing with sadness, concern and anxiety for one reason or another, many churches hold “Blue Christmas” or “Longest Night” services in the days leading up to Christmas.

“I think it’s the second-most powerful service that we do; the first one being Good Friday,” Ken said. “From a spiritual standpoint, this is the one that makes us contemplate, to really think about what the Christmastide is all about.”

The service, which will be live-streamed on the Internet, brings in anywhere from 10-30 people a year. But it’s not about the amount of people who attend but instead about being able to comfort anyone who walks through the door who’s in need of some support.

“If you think about it, ‘It’s the most wonderful time of the year,’ only it’s not,” Ken said. “For somebody who’s lost a loved one, who’s lost a job, it’s the first time that they’re alone. If they’re going through a divorce, that emotional piece where everybody thinks there’s a holly, jolly Christmas, it’s not necessarily so for everybody. 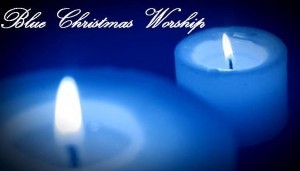 “The reality of Christmas is that for Mary and Joseph, it was not a merry, merry Christmas. They struggled trying to find a room at the inn and then were threatened with having to go and become refugees in Egypt. With Mary being an unwed virgin carrying a child, Christmas was pretty tough. Struggling during the holidays is something I think just over the last 10 years we’ve begun to recognize and begun to address that people struggle at Christmas.”

The tone of the service at Providence United PC is obviously much different than that of a Sunday morning service or a Christmas Eve gathering. People eventually come forward and take light from the Christ candle on the advent wreath, put their candle in a container filled with sand, then say a prayer before returning to their seats.

“The Longest Night Service addresses the depths of pain, of sorrow, of loneliness, of feeling disenfranchised, of feeling low and being able to address that and say that is OK,” Ken said. “On Christmas, the ending song is ‘Joy To The World.’ The ending for the Longest Night is lighting candles at the table, it’s looking at the advent wreath and seeing that the light is there and being able to offer a prayer and listen predominantly for God to whisper God’s peace to you and leave the sanctuary not with a ‘Joy To The World’ but with a ‘Silent Night’ because the savior has been born. Know that the light is there for you. … We want to allow the baby that is sitting in that manger to serve you and heal you so that you can go out and serve.”

Derry Presbyterian Church in Hershey, PA, has been holding its “Longest Night Service” for the past 18 years and annually brings in between 50-70 people. The Rev. Dr. Marie Buffaloe, the parish associate pastor at Derry PC, leads this service on a Tuesday night and brought it with her from previous calls in West Virginia and Virginia.

“I knew in the holiday season, especially for ones who had losses through death or who were going through a divorce or unemployment, the whole Christmas hype and the ‘Jolly, Holly Christmas’ is not where they are at emotionally and mentally,” she said. “As the days get shorter, then the nights get longer, and when you’re going through a difficult time it is just agony waking up in the middle of the night and knowing that there is still a long part of the night still left.”

The service includes communion and refreshments afterward that are just as big a part of the gathering as what happens during worship.

“We all hear, but that if you’re struggling you hear those words of comfort and hope, that in the midst of the darkness the people who have walked in darkness have seen the great light,” Marie added. “And maybe in times of grief and aloneness, you hear those words in deep ways like no one else. We have refreshments afterwards and most everyone stays. It becomes the focal point, and the fellowship and support and the stores are told afterward.”

The advent candle plays a role in the “Longest Night Service” at Derry PC as well, “incorporating a lot of the advent liturgies and rituals in a way that’s tailor-made for the service,” Marie added. Invitations are also sent out to those in the congregation who have lost a loved one, which adds a distinct personal touch to the service. 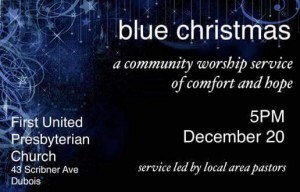 At the other end of the spectrum is First United Presbyterian Church of DuBois, which is holding its first “Blue Christmas Service” on Dec. 20. The Rev. Sarah Sedgwick only decided in early December to hold such a service because there will be many people grieving this holiday.

“There was a sense that there were folks in my congregation who wouldn’t find a lot of Christmas joy this time of year and were struggling,” she said.

Sarah approached the local ministerium and has teamed up with a United Methodist and an Evangelical Covenant church to provide the service, which First United PC is hosting. Sarah is not planning to use the organ for the service, but instead a piano and guitar “so that the music can be a little bit more reflective and quiet.” Worshipers will be offered a chance to light “specific candles for specific needs” from the advent candle and the attenders can also be anointed.

This “Blue Christmas Service” is the only one being advertised in the DuBois area and Sarah is planning for 50 worshipers from the community to attend. The objective is to continue the service on a yearly basis and possibly have it rotate between the three churches.

“Our goal is to remind folks who are hurting at this time that God has not forgotten them, that God loves them in the space and the place that they are and that the church community loves them as well,” Sarah said. “It’s a difficult time of year for them and we want to support and love them as well and help them to remember that we love a God and serve a God who needs us where we are at even with all of our hurts and difficulties and to be honest some anger toward God at this time. We pray that this service reminds them of that and that it can offer them some peace.”

“The goal is to experience our grief together, to recognize that the holidays this time of year are not all happy and joyous and there are people who are sad and grieving,” said Pastor David Brague of Second PC, who started the service with First United PC’s Jim Thyren. “We want to get people to realize that Christ is there in their suffering, that they are especially not alone in that. At those points we tend to think that we are abandoned.”

The advent candle again plays a strong role in this service, which has been bringing in between 15 and 20 people from the community each year. 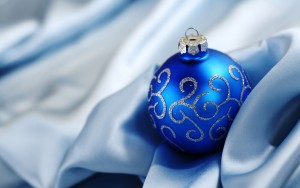 The “Blue Christmas Service” at Newlonsburg Presbyterian Church in Murrysville, PA, on Dec. 20 will have added significance this year as the mother of a son who wounded 21 students and a school official in a high-school stabbing spree two years ago will be attending for the first time. She is coming as a guest of a church member and the hope is that this service will comfort her following this devastating event.

“For some, it’s a stepping stone to be able to participate in Christmas again, to be able to see Christmas in just enough of a different light to recognize that there’s a lot about Christmas that walks in hard places and it isn’t just ‘Joy To The World’ trumpets, presents and Santa Claus and everybody being happy,” said the Rev. Marnie Silbert, the associate pastor at Newlonsburg PC. “Christmas is bigger than that and includes where they are.”

Marnie, who has been with the church for 33 years, started the service five years ago. It takes place in a worship space that includes a fireplace and includes saxophone music.

“There’s a certain quiet meditativeness to this, which also even for people who are just kind of frenetic in this season because of work or demands, it almost gives them a fresh breath,” Marnie concluded. “I think a Blue Christmas Service, at least as we’re doing it, really could be beneficial to anyone.”

Here are a few other churches that are holding Blue Christmas/Long Night services this year (click on the name for more information):