One of the Rev. Dr. Jean Henderson’s colleagues was in trouble. And while she was there to offer support and assistance in any way possible, in the end she felt like she hadn’t done enough.

Following the tragic death of the Rev. Brent Dugan, who was the pastor at Community Presbyterian Church of Ben Avon near Pittsburgh, Jean created the PEAL (Pastors Encouraging And Listening) Team in Pittsburgh Presbytery. Formed in 2007, PEAL’s goal is to reach out to pastors in the presbytery and provide any kind of help that is necessary. 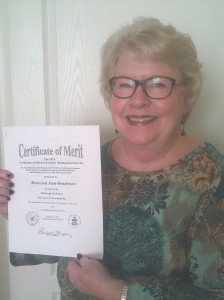 For the past eight years, PEAL has been supporting the region’s ministers in numerous ways and it hasn’t gone unnoticed. In 2015, Jean was honored for her work by the Association of Retired Ministers, Their Spouses or Survivors (ARMSS) with the National Merit Award for Exemplary Service in Retirement. It has been very satisfying work for Jean, but it’s not about awards for her. It’s about making a difference, which Jean did in part by filling the pulpit at Community PC for several months after Brent’s passing.

“After Brent died and I was able to be there for a while at the Community Presbyterian Church of Ben Avon, I felt more called to that ministry after retirement than I think I felt called to any ministry during my regular active ministry,” she said. “And PEAL was part of that, too. I couldn’t have said ‘no’ when they asked me to do this.”

Jean was one of only a handful of people to receive the national award from ARMSS, an honor that came her way after she was nominated for it by Sheldon Sorge, the executive presbyter for Pittsburgh Presbytery.

Jean was ordained in 1971 in the former Grafton Presbytery in West Virginia and also served 15 years in Beaver-Butler Presbytery before finishing out her career at what is now Sewickley Presbyterian Church. Upon her retirement in 2006, Jean and her husband, David, decided to attend the Community PC of Ben Avon where David had been actively involved. The pastor was Brent Dugan, whom Jean was friends with because Brent had been the preacher at Jean’s home church in Fairmont, WV.

A short time after Jean started attending the Ben Avon church, Brent committed suicide. Unbeknownst to many people – including Jean – Brent was gay. For the folks who did know or suspected Brent was gay, it was not an issue because his lifestyle did not influence his pastoring skills. However, a local television talk-show host found out about the secret side of Brent’s life and was ready to break the news, running promotions about the story a few days prior to its airing.

“He had all these teasers about this Presbyterian pastor who was gay and how it was against the rules of the denomination,” Jean recalled.

Jean reached out to Brent during this week of television advertisements and offered to house him and his dog. He declined, but knowing that his controversial lifestyle was about to be made public, Brent took his own life later that week.

Jean, who had filled in for Brent the previous Sunday at Community PC, was asked by the presbytery to be the interim preacher there, a role she filled for several months. The presbytery also asked Jean to coordinate a support group of retired pastors that could reach out to ministers in need and she quickly agreed to take on that task.

“We were all feeling extremely guilty that we had really missed this about Brent,” Jean said. “He was really beloved. He had been at the church for 16 or 18 years and knew everybody. He would just drop in on families. People just adored him. The grief was just unbelievably raw and there was a lot of guilt about why didn’t we see it, why didn’t we say ‘Brent, we don’t care that you’re gay,’ but nobody said anything that we knew of. I certainly hadn’t, and I had known him longer than anyone.”

Jean sent out 16 invitations to retired pastors to join her task group. Thinking she would be happy if half of them agreed, she was ecstatic to learn that 15 of them wanted to be part of this initiative.

“I was asked to get this group together so that we might be able to kind of be in touch with people more and be available in a way that would be confidential,” Jean said. “One of the rules for us was that we could never be a reference because people want to talk to us about private things that they can’t talk to others about.”

The PEAL group formed and met quarterly, coming up with different ways in which to support pastors and their families in this time of retirement.

“We’ve made ourselves available to people,” she said. “When somebody dies, we make contact with the family, we go to the funeral home, go to the funeral and try to keep after families afterward. When someone’s in the hospital, we give support where we can in that regard. We’ve hosted maybe four or five luncheons for retired pastors and spouses and survivors at the presbytery office and that has been well received.

“We want to provide confidential and pastoral support to them. The presbytery can offer professional support and the Board of Pensions has all kinds of offerings that they can do, but this is just kind of pastor-to-pastor, friend-to-friend, older person sometimes to younger person. We try to train ourselves about some of the assistance programs there are through the presbytery and Board of Pensions. We share that kind of information to people.”

One goal Jean has for PEAL, which now includes 13 people, is to recruit some younger members since many of the ones who came on board when it was started nearly a decade ago are now reaching an older age and may soon be leaving for one reason or another. And chances are those retired members will one day, too, count on PEAL for support down the road.

Having it go full circle would be appropriate enough and just validate PEAL’s existence even further.

“We see this as something good that came out of a really tragic situation,” Jean said. “I don’t think the PEAL team would be here today if Brent hadn’t died.”