If you ask the Rev. Tim Cargal why small churches are struggling to get by, he’ll quickly throw out some interesting facts.

“The average charitable contribution to a church is a little over 2 percent per member,” he’ll say. “So it takes 50 people to pay for a pastor’s salary. If you include things like benefits and continuing education, it takes 75 people. That doesn’t even include the church secretary’s salary or what it takes to maintain the building. If you are a congregation with less than 100 people, it’s hard to have a full-time pastor with that level of giving.” 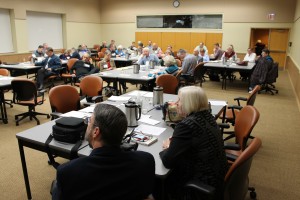 Around 50 people from the Synod of the Trinity region gathered in State College for the COM-CPM workshop in late November.

Tim, who is the assistant stated clerk for the Preparation for Ministry in Mid Council Ministries of the Office of the General Assembly, was one of several featured guest speakers who were on hand for the two-day Synod of the Trinity Committee on Ministry-Committee on Preparation for Ministry (COM-CPM) gathering in late November. Held at the Penn Stater Conference Center Hotel in State College, PA, the workshop included some 50 people from across the Synod who are involved in either their COM or CPM groups – or both – within their presbytery.

Tim had some other staggering numbers relating to the challenges facing small congregations.

Similarly, the Rev. Chuck Salter, another of the guest speakers, is also a numbers guy and says that “money follows mission” but that many congregations don’t know what their mission should be.

“Most churches have no clue what is going on within a 20-minute walk of their church,” says Chuck, who is the president of MissionInsite, which is a team of “community engagement specialists for faith and non-profit groups.”

Chuck, an ordained United Methodist pastor, uses demographics to help churches “know their neighborhood.” He recalled a Sunday when he was preaching and talking about the area surrounding that particular church.

Chuck said from the pulpit that there were a number of “singles” (i.e. single people) living within a short distance of the church. Chuck recalled an elderly woman sitting at the end of the front pew who said, “I’m one of them.” Chuck asked her to tell him about herself and she said, “I can’t paint my railing and several of my friends can’t either.” Chuck suggested the church take one Saturday a month to do mission projects for the elderly in their neighborhood and virtually guaranteed that within a short amount of time the congregation’s dynamics will change. 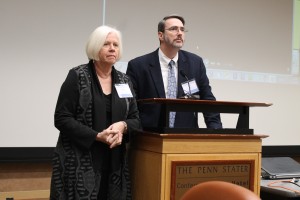 Joyce Lieberman and Tim Cargal were on hand as representatives from the staff at the Office of the General Assembly.

Among the other speakers were Joyce Lieberman, who joins Tim Cargal on the staff at the Office of the General Assembly; Erin Cox-Holmes, the executive presbyter/transitional stated clerk for the Presbytery of Donegal; Presbytery of Redstone Executive Presbyter/Stated Clerk Skip Noftzger; and the Synod of the Trinity’s Transitional Executive Susan Faye Wonderland and Stated Clerk Wayne Yost. The different talks helped some people in attendance confirm the things they are doing in their churches.

“The demographics, the facts, the size of the church are causing some alarming but really fascinating aspects,” said the Rev. Dr. Robert Andrews, who preaches at Grove Presbyterian Church in Danville, PA, in Northumberland Presbytery. “Personally, I’m very encouraged. I think this is the best time for the church we’ve had in a long time. We’ve been resting on our laurels.

“It has verified what we are doing at Grove is dead-on right for the future of the church. What we’re doing is a whole new model of transition in that I’ve served 26 years at Grove. It’s time for a really new, exciting leadership because I’m boring. We just need someone to work with the core group of young people that we have. It’s telling me that everything that we thought and anticipated is the right way to go.”

Helping individual churches figure out what’s best for them was the top objective of this gathering.

Joyce added, “We want to help people think about some of the broader issues that maybe they haven’t had to deal with but are being dealt with across the denomination and other presbyteries that may cross their plate and help them think a little more broadly about how to best handle that. We want to give them the tools to do the work that their presbyteries have asked them to do.”

“The proportion of women teaching elders is significantly higher among those who are ‘active’ as compared to ‘all,’” Tim said. “The distribution between women and men at younger ages indicates this shift will continue. Beginning in 2010, each year more women have been ordained to first calls than men – even as the total ordinations has slowly declined.”

Unfortunately, women still are not getting a fair shake in some places and are many times receiving less compensation then their male counterparts.

“There still are a fair number of our congregations that will not consider women,” Joyce added.

Tim also pointed out that in 2010 there were roughly 335 Presbyterian ministers ordained, but that same year only 135 of them were called to installed pastoral positions. It’s a 20-year trend that seems to be continuing.

“The majority of people in seminary have no plans to serve a congregation,” Tim added.

That fact wasn’t lost on the Rev. Emily Chudy, who is the minister at Central Presbyterian Church in Downingtown in the Presbytery of Donegal.

“Some of the statistics about the number of current teaching elders that will be in the denomination in 20 years are pretty staggering,” she said, “which opens up the door for conversation that we can’t wait for 20 years to make some decisions about how our churches are going to be resourced. It’s hopeful information for those entering the church to say that there really is a place for you. Even though we talk about the number of churches that are closing, that’s not the primary narrative and it’s not the one we need to be talking about. There are some great resources for our candidates and inquirers within different presbyteries.”

MissionInsight is loaded with statistics as well. If a church is a member of MissionInsight, it can access data for its neighborhood, everything from how many and what ages live in a household to what the total income of the wage-earners is in that household. This can be an integral tool for churches as they seek out their calling.

“Ninety percent of our churches don’t know what they’re not seeing,” Chuck said. “There is a direct correlation between church vitality and where your people live.”

This type of information is also key when deciding on a new minister.

“When calling a pastor, make sure they fit into your community and who you want to reach,” Chuck added.

The data can be printed out into packets of information that can be reviewed by church sessions and committees, but one needs to look beyond the statistics to find the true meaning.

“The least effective way to use demographics is to find a 10-mile radius and put a circle around it,” Chuck said. “The use of demographics is not about learning numbers. It’s about putting a face, a heart, a mind and a behavior on a population so that churches, as they engage people, understand what their hopes and dreams are. It’s more than plus and minus. It really is understanding the spirit of the community and seeing how you can bring the Gospel to people and a particular place. It is not marketing. It is about becoming a blessing to a household and making a difference.”

Among the other topics of discussion during the two-day workshop were “Pastoral Transitions and Empty Pulpits,” “Ordination Exams for a Digital Age,” “Trends in Handling COM Decisions,” “COM and the Small(er) Church” and “Changes in PA Reporting Laws, Councils and Child Protection Policies.” In order to give those in attendance listening options, there were at least two talks held at the same time throughout the workshop.

“People were really engaged in the workshops,” Tim said. “They asked really good questions and serious questions and showed a good understanding of what’s going on. They were very receptive and everyone participated very well.”

These varied topics were especially beneficial for Emily.

“I’ll take back an excitement for the connectional ministry of our denomination and the resources that we have access to here,” she said. “We have a lot of neat opportunities ahead of us. We have a church that is changing but not in a bad way, and we have a unique opportunity to respond to that in really creative and new ways.”