Is U.S. Congress next stop for Rev. Bill Golderer?

When the Rev. Bill Golderer began his ministry at Arch Street Presbyterian Church in Philadelphia a decade ago, it had just six members. That’s right, six.

“And then after I took the helm in 2008, the six went down to three. I halved it,” Bill said with a chuckle as he reflected on his start. “Two people died and one person left who didn’t like the changes.” 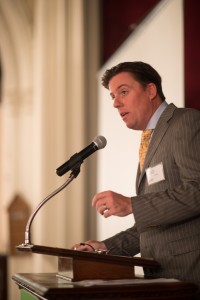 But what Bill has been able to do in the past eight years has been nothing short of remarkable. Arch Street Presbyterian Church now has close to 200 members and has established its own preschool. And it doesn’t stop there as under Bill’s leadership Arch Street PC has become a mission partner for Beacon – a newly-chartered church that turns to the arts to connect with the younger community and their families. Prior to coming to Arch Street he also founded Broad Street Ministry, a sister congregation to Arch Street PC, and is in the process of opening the Rooster Soup Company Restaurant, which will give 100 percent of its proceeds to Broad Street Ministry’s Hospitality Collaborative. (Read about the Rooster Soup Company Restaurant in the Wall Street Journal by clicking here.)

In 2016, Bill hopes to add one more thing to his list of accomplishments: United States Congressman. Yes, the accomplished pastor is running for a spot in the United States Congress in Pennsylvania’s Seventh District. Bill will need to beat out three other Democrats in the April 26 primary election and then defeat the Republican nominee during the General Election in November in order to win the seat. Sounds like a tall order for someone like Bill who has minimal experience in the world of politics, but based on his track record, overcoming long odds are right up his alley.

“I’m not in this to become a politician,” he said. “I’m in this to attempt, to the limited ability that I have, to bring forward some of the things that have been really worth doing in our politics from before so that the future can be a little different.”

Bill spoke in length about the change in the landscape of politics over the years and how he’d like to see if there are ways to inspire people to participate.

“I have been in Philadelphia for two-and-a-half mayoral cycles,” he said. “The mayor of a major city is kind of a big thing. What really surprised me was that our voter turnout was less than 25 percent. There’s a lot that I read about shaming of the voters, but the reality is I feel there are two symptoms of a spiritual sickness that has settled in on our politics. One of them is resignation – resignation that sometimes manifests as disgust – and the other is a deep apathy, like it doesn’t matter. ‘These people are all clowns and they’re all selfish and nothing inspiring or worth doing is coming forward so I’m just gonna watch Netflix.’

“My task is to see if there is anything that I can be doing as a candidate to inspire people to understand the stakes and help people be excited to participate. And I’m not sure if I’m going to be able to run a campaign like that but I want to.”

Bill continued, “I wouldn’t enter this if I didn’t think that I could make a difference, that I could do something that is consequential, but really the thing that kind of disturbs me is the way that many of us are viewing our politics. It’s becoming more and more similar to or less distinguishable to reality television. It’s becoming a game or sort of a spectator sport. I cut my teeth by growing up with political leaders who had moral courage and were of consequence.”

Bill has never run for any kind of public office. But following his undergraduate studies, he became involved in Interfaith Alliance in Washington, D.C., which describes itself as a group that “celebrates religious freedom by championing individual rights, promoting policies that protect both religion and democracy, and uniting diverse voices to challenge extremism.” Bill will tell you the question in his life has been “How does change come about to make people’s lives better?” and he felt Interfaith Alliance was an organization that could help him bring that change.

Bill went on to become the Founding Director for Religious Outreach for Interfaith Alliance, which led him to seminary school. He eventually recruited a national body of religious leaders as well as local clergy to “share this message of religious tolerance and productive and constructive politics.” He made his way onto CNN for debates with people like conservative political activist Ralph Reed.

He eventually landed in Philadelphia and established Board Street Ministry (2005) a couple years before starting his call at Arch Street PC. At the end of November, Bill stepped down as the executive director at Broad Street Ministries because of his desire to run for Congress, but he will remain on the Board of Directors there.

“There’s such an incredible team that has been assembled there (at Broad Street Ministry) that the organization is not going to miss a beat,” Bill said.

Bill plans to continue to preach the majority of Sundays at Arch Street PC in order to “keep me grounded in the promises and challenges of the scripture.” Arch Street PC has brought in the Rev. Anne Park to serve as Minister for Executive Leadership for a year to help cover the daily needs of the congregation.

“At Arch Street, I felt unresolved in my spirit about leaving now,” he said. “I didn’t feel like my call had run its course, but I did feel summoned to this opportunity to be of service. The session of Arch Street was very creative in helping me figure out a way we could continue to be church and I could continue to offer what I could to the continuing revitalization, resuscitation and resurrection of Arch Street while also pursuing this opportunity to serve.”

The fact that Bill is a minister puts him in the minority when it comes to candidates running for political office. But that isn’t deterring him one bit.

“People have developed in the United States a pretty significant allergy to organized religion,” he admitted. “It’s not that they don’t know what the church is about but many of them have had an experience with the church and it hasn’t been positive. That is a challenge for me. You’re not going to change people’s experiences. And yet if they look specifically at how my faith has basically fueled me to deploy myself in the directions it has, I get a better hearing. I am nowhere near perfect and have lots of significant flaws, but I have tried very hard to try to use what I have been given to do everything I can to help people. And that gets a hearing. People don’t object to the message. People need to see evidence that what you’re saying has some alignment to how you are living your life.”

That might not sound like politician-speak, but it very well could be the words of one by next November.