Group at First PC (Pottstown) enjoying their faith and nature

Is there a better place to enjoy God’s gifts than to be out among them? If you ask Mike Deegan, he’ll quickly say “No.”

Four years ago, Deegan connected with First Presbyterian Church in Pottstown, a congregation with which his father had been a lifetime member. Within a year of becoming a member, Deegan organized a spring hike and invited anyone from the congregation to join him. And when 25 people showed up, the Faith & Nature Group was born. 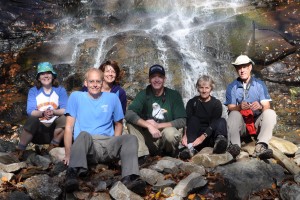 “For me, before getting back into an organized church, I found God through being out in nature and experiencing nature,” Deegan said. “I just thought there might be more people out there like myself who felt the same way.”

The Faith & Nature Group participates in roughly 10 activities a year, doing everything from walks and hikes to seeing the annual eagle migration at the Conowingo Dam in Maryland to what they have dubbed the “Presbyterian Paddle,” which is an annual kayaking event on a local body of water. The size of the group varies, with the average being 10 people ranging in ages from 7 to 70 hitting the trails for an event, while as many as 40-50 will be part of the more unique activities like the eagle migration.

“When we go to a lot of these really special places, we all end up just having a moment where we all are just kind of sitting around and it’s like, ‘Wow, it’s just beautiful and thank God we’re all here together,’” Deegan said.

One of those special times came during the group search for a snowy owl in New Holland, Lancaster County. Deegan captured the moment perfectly in the church’s newsletter, the “Celtic Cross.” He wrote, “For me, the snowy owl not only created a sense of awe, it gave me something else. I struggled for a while to capture what I felt and then it hit me. Reverence. It’s a rare feeling. The first thought that came to mind upon spotting this bird was, ‘Thank you Lord for putting me here right now.’ As I gazed at this bird of prey with our group, other birdwatchers showed up and soon the atmosphere was similar to being present at an especially moving church service. Everyone was quiet and respectful, in a state of reverence for this gift from God.”

It’s those moments that help bring the entire afternoon of fellowship and enjoying God’s creation together, making it all worthwhile for Deegan. But there was a time when he thought he was the only one who felt that way about being outdoors and enjoying the gifts of nature. 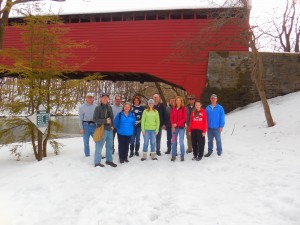 “To bring up nature to some people, they say ‘What are you talking about?’ They kind of look at you like you’re crazy,” he said. “When you bring God into stuff a lot of times people are like, ‘What about evolution?’ It’s not about that. It’s just about, ‘This is bigger than us.’ This didn’t happen by accident. I just want to share that passion I have for appreciating these great things that God put on the earth for us. I think a lot of times people just forget about that or take it for granted.”

An offshoot of the Faith & Nature Group are skiing events that have been started by another member of the congregation, Hank Phillips, helping to fill the void in the winter and specifically January when the group does not hold any events.

As for the other events, Deegan tries to mix up the places the group goes but does have his favorites like Marsh Creek and Green Lane state parks, and of course Conowingo in early December for the eagle watch. He also takes suggestions from people and will check them out himself before making it a stop for the Faith & Nature Group. As for distance, the drives are usually within an hour of First PC since most of the events are held on Sunday afternoons. And trips to the Poconos aren’t out of the question.

In the fall, a longer hike has been a regular occurrence for the group, with last year’s destination being the Lehigh Valley Gorge State Park for a full-day hike. On that day, Deegan remembers the hushed response from the group when it finally reached the top of the gorge and could overlook the Lehigh River and take in all of the fall foliage. “It was one of those magic moments when we finally got to the top,” Deegan recalled.

Deegan will ask someone in the group to share their feelings at a moment like that, which adds another special element to the outings.

“It kinda helps people to see that it’s not just me feeling this way and that it’s something for everybody to do,” he explained. 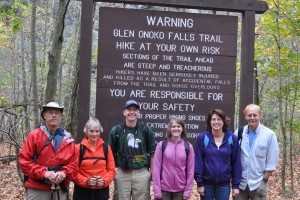 The Faith & Nature Group can include as many as 50 and as few as six, as was the case during an outing at Glen Onoko Falls/Lehigh Valley Gorge State Park.

One group member, Sue Matrone, was especially moved during an October walk at Pulpit Rock and Pinnacle Point on the Appalachian Trail near Allentown, helping her get over the passing of a loved one. She wrote, “With the two-year anniversary of my mother’s death approaching and the pressures of my job situation, I haven’t been sleeping well. Therefore, I wasn’t sure if I was up to the 10-mile hike to the Pinnacle. However, once our small church group started on the hike and conversations started flowing, I knew that it was going to be a great day. It wasn’t just a great day, it was an amazing day! … I wish it would have been a little less crowded at the Pinnacle, but it didn’t stop me from finding the peace I was searching for with all that’s been on my mind. I looked out at the amazing landscape and thought, thank you, Lord — I needed that. I also needed the conversations that flowed from work situations, to dealing with cancer and other personal situations.

She continued, “My reflections — we are truly blessed with such beauty all around us, and it’s very easy to just wallow in self-pity and fall into darkness. But when you feel the pull, go and the Lord will provide you with exactly what you need — spiritual growth.”

New trips planned for 2015 include a picturesque “winter walk” at Nolde Forest State Park in Reading as well as a stop at the Middle Creek Wildlife Management Area in Lancaster County to see the spring snow geese migration. Deegan is hoping these will offer a couple more “wow” moments for those in his group like the ones that occur at the annual eagle watch.

“People who have never done it before get out and you can see it in their face,” he said. “Their face just lights up and they can’t believe what they’re seeing in front of them. It’s always great to be able to introduce somebody like that and share that nature’s right here, you just have to go out and see it, especially when it’s something as powerful as an eagle. It makes people just stop.”

Having people stop and look around them, taking in and appreciating all that God has created is exactly what Mike Deegan intended when he organized the first Faith & Nature Group walk in the spring of 2011. It seems to be working.

Note: Anyone interested in learning more about the Faith & Nature Group or wishing to join it for a future event can contact Mike Deegan by email at mdeegs16@aol.com.