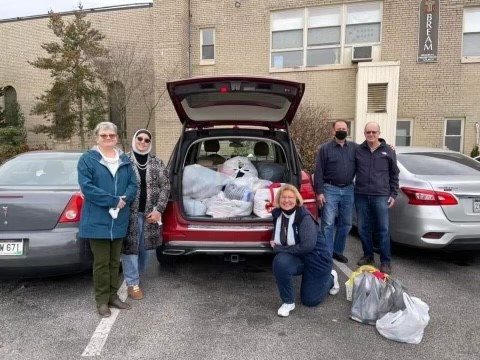 In 1883, Glen Elk Mission was created by the First Presbyterian Church of Charleston, WV, as an outreach church, a congregation that could work with the impoverished community and provide needed services for those less fortunate. More than 140 years later, the need is still present, and the work is still getting done.

Bream Memorial Presbyterian Church is now the name of that mission church on the west side of Charleston. It has several outreach programs in place to serve the community, and it’s most recent includes everything from showers to vaccinations and wound care.

Called the Shower and Healthcare Program, it provides a place for the homeless and those without sufficient utilities to take a shower, get some new or gently used clothing, pick up some food and also receive treatment on various health issues.

“The need is great,” said Derek Hudson, the Facilities and Outreach Coordinator at Bream Memorial who manages the shower program, “especially when summer comes around and it’s hot, and you have nowhere to go to get a shower, nowhere to get clean, nowhere to even go to the bathroom during the day.

“We have a lot of women who come through who are victims of domestic violence and sexual assault. They just need to start their life over and being able to provide that fresh start for people or a bridge to another start is important to do. Showers are a basic need, and if we can provide that and be here for them it’s great.”

The shower program has been in existence since the late spring of 2021 and has grown substantially since its inception. The increase in participation includes everything from those who are receiving the care to those organizations providing services as part of the program.

“In every aspect, it has grown immensely,” Derek said. “When we started, we were tricking in three or four for showers. Now, we’re serving an average of 30-40 people on a given day.”

The shower program, which continues to be available three days a week during the school year and which will hopefully expand to five days during the summer months, serves all ages. While there are some in the 18-24 age range and a few older people who turn out, the majority of the participants are between 25-40 years old. And the reasons for them needing the services Bream Memorial offers vary.

“We’re in the lower-income area of Charleston, so we’re getting a lot of downtrodden people, families down on their luck,” Derek said. “I’d say 30 percent are just families who are down on their luck. There are no kids that come through (for showers) but they’ll come through for clothes. The rest are homeless, and probably a quarter of those are addiction cases.” 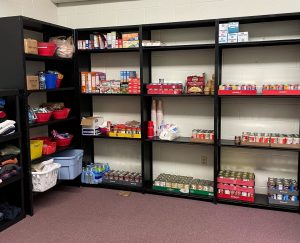 Bream Memorial Church’s shelves are stocked with food, feminine products and hygiene items that are given away to those who need it.

The need for this program revolves around the shower aspect of it. In late May of 2021, many of the shelters in Charleston had to shut down due to the covid pandemic, thus taking away locations where showers were available. When Derek learned of this, he immediately thought of Bream’s community center that has several shower stalls and soon opened the doors of the church to help meet this need.

It started as simply a shower program but quickly grew into much more. Among the other services available are a canned food pantry and a health bus from Cabin Creek Health Center that provides vaccinations, wound care, medication assistance and will even schedule doctor’s appointments. There are also people available to assist those who have had their utilities shut off get those services restored. However, among the most popular things is a clothing closet that’s stocked with T-shirts, socks and underwear.

“We probably go through a couple hundred T-shirts and the same for socks and underwear,” Derek said. “We can’t keep underwear in stock anymore. And we operate by donations.”

Three off-duty police officers have been volunteering their time at the program, as well as supplying some food themselves while also grilling out when the weather allows.

“They just want to give back to the community,” Derek said of the local policemen.

Meanwhile, a local caterer who rents the kitchen at Bream Memorial has gotten in on the action and “has greatly expanded the menu with the food we serve,” Derek said.

“Part of the lease is that she provides meals for this,” Derek said. “The people know there is going to be some really great food. They’re getting really high-end food, better food quality than I usually get when I go out to a restaurant.”

Bream Memorial is also partnering with West Virginia Peers, which helps people with things like housing, treatment and gaining ID’s. There is hope of even more expansion that would include areas for laundry services, banking, constructing resumes and even a mental health referral service as part of a drop-in day center. It’s all part of an outreach that is sorely needed in Charleston and one that doesn’t go unappreciated.

“A lot of our guys are homeless, but they stay around to clean the showers up afterwards, they clean the locker room, they have been cutting grass for us and do odd jobs for us around the buildings,” Derek explained. “That part is almost more satisfying – that they’re making it into a community of their own. They’re not only building trust with us, they’re building trust with each other. Getting them help, getting them what they need and then giving back to us, it’s full circle. It’s pretty amazing to see.”

Through a partnership with Religious Coalition for Community Renewal (RCCR), Bream Memorial has been able to apply for funding and connect with other organizations to provide all these services now and even more in the future. 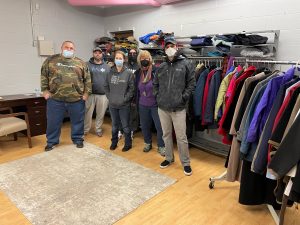 Bream Memorial’s Shower and Healthcare Program also includes a clothing closet that is well-stocked thanks to donations from the community.

While Bream Memorial’s efforts and outreaches have been a blessing to those in need, it was not always been widely accepted by the church’s neighbors. After applying to receive a $500,000 grant from the City of Charleston, word got out about Bream’s plans for what was being incorrectly labeled as an “overnight shelter.” Businesses in the area quickly became concerned that this outreach would attract more homeless to the sidewalks and areas in front of their stores. As rumors spread about the details of the plans, they continued to become inflated, causing more and more business to voice their opinions against Bream’s plans for the shower ministry.

“As a church doing mission work, we answer to God first and foremost,” Derek said. “We want to listen to what the community has to say. If there are legitimate concerns, we hear them and address them immediately.”

Bream held two meetings to address the concerns of their neighbors. The fact that the outreach had already been occurring for nearly a year without the businesses noticing any increased issues helped Bream’s case. Eventually, many of the businesses became educated on the facts and changed their heart.

“Through the shower program, we are strengthening our partnerships with other individuals and organizations in our community who also serve those experiencing extreme poverty,” said Dawn Adamy, the pastor at Bream Memorial. “When local businesses learned what we were doing, and that we hoped to expand services, there was significant pushback, mostly due to fear of the unknown and the stigma that so often accompanies homelessness. Because of our commitment to the Matthew 25 vision, we were able to clarify our mission and sense of purpose; we could respond faithfully and with grace to those who did not want us serving the poor and vulnerable in their neighborhood. We had support from many members of our community, who spoke up on our behalf.

“Sometimes God can use adversity in a way that brings new vitality to a congregation’s public witness; that has certainly been true for us.”

Despite some hurdles, Bream Memorial’s Shower and Healthcare Program is here to stay and continues to grow. It’s the work that the First Presbyterian Church of Charleston envisioned for the city more than 140 years ago and an outreach that is here to stay.

“Where there’s a need, God has provided,” Derek concluded. “We did not plan on offering food or clothes. We put the word out and the next thing we knew we had basically a department store of clothes and a whole second pantry of food. Every step of the way where there has been a need, God has provided. It’s been a blessing for us to be able to do this.”