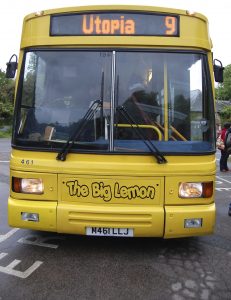 The bell tower is playing across from my apartment at Pittsburgh Theological Seminary.

Go to dark Gethsemane,
All who feel the tempter’s power…

Ursula LeGuin’s short but haunting “The Ones Who Walk Away From Omelas” describes a society of joy and beauty with one ugly secret. Its nearly-unimaginable bliss depends upon the existence of one perpetually miserable child.

(Be forewarned if you read the story. LeGuin’s depiction of the child’s anguish hurts.)

…your Redeemer’s conflict see;
watch with him one bitter hour…

At the right age, the citizens of Omelas meet the child. Each must then choose whether to stay in the beautiful society, knowing its underbelly, or to leave.

Only a few leave, LeGuin says. “The place they go towards,” she writes, “is  a place even less imaginable to most of us than the city of happiness. I cannot describe it at all. It is possible it does not exist.”

Suffering children and a suffering Child

I’ve thought a lot about LeGuin’s closing words since I discovered the story, and more as Holy Week has progressed. We cannot imagine where they have gone. But if we cannot, is that because — here the horror — our world depends on the pain of Jesus’s little ones? Do our imaginations fail because we have never seen a place free of suffering children?

Follow to the judgment hall;
view the Lord of life arraigned…

Or is LeGuin’s point more theological, more existential? Does the goodness we enjoy — in this world and the next — actually, literally, require the suffering of one abandoned Child?

After all, Calvinists describe not only the special grace for those God chooses, but also common grace for all. “The rain falls on the just and the unjust…” (Matt. 5:45). Even the simple and common goodness around us is grace — God’s gift — secured for us in the death of Christ.

But if Omelas is horrifying, why not our theology? Would not such a bargain return us to the child sacrifices God instructed the Israelites to reject centuries before?

…O the wormwood and the gall!
O the pangs his soul sustained! 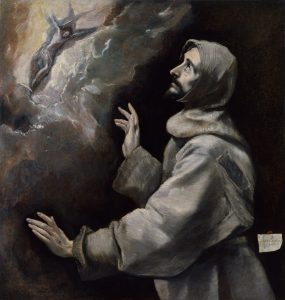 So we proclaim. Out of his great love for us, he chose. Such is the critical distinction between our world and Omelas.

Calvary’s mournful mountain climb;
there, adoring at his feet…

Yes, granted: In the moment Jesus even gave up his freedom to choose. He became helpless. He subjected himself inescapably to the ruthless forces of society, politics, religion, and empire.

But he chose that helplessness. More deep, more original, than his helplessness was his agency.

From the foundation of the world, the Second Person of the Trinity, in whom dwelt all the fullness of God (Col. 1:19), chose to become the empty one (Phil. 2:7). And on a cosmos-changing night in an olive garden, he repeated that choice in time, following it through to the end — “even death on a cross” — thereby providing the eternal sacrifice that makes us whole (Hb. 9:12).

…mark the miracle of time,
God’s own sacrifice complete…

He chose. And that makes all the difference. Because he chose, he secured for us both this world and the next.

Early hasten to the tomb
where they laid his breathless clay…

At the depth of Christ’s helplessness, even the helplessness of death, the First Person of the Trinity responded with the same great love and raised him up (Eph. 2:4; Phil. 2:9).

The suffering one is the exalted one. The one who chose to die received new life.

…all is solitude and gloom.
Who has taken him away?

And the new life is now for us as well. For the Child who freely and eternally chose to suffer did so out of a love that we can, perhaps, only imagine.

Christ is risen! He meets our eyes.
Savior, teach us so to rise.

A blessed Triduum to you.