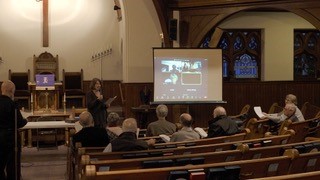 An update is given on the prayer song partners project that also included a singing workshop at Huntingdon Presbytery’s meeting in late March.

In the fall of 2021, the Synod of the Trinity awarded a Partnership Grant to Huntingdon Presbytery’s Committee on Presbyterian Life, which it is using to create a songbook for use in pastoral ministry across the presbytery and synod as well as with ecumenical partners throughout the world via the internet. What follows is a description of how the funds are being used as written by Ela Robertson, the pastor at West Kishacoquillas Presbyterian Church in Belleville, PA.

On March 23 at the invitation of our long-term planning team and our interim presbyter, I facilitated a Zoom conversation on music and worship, which included an introduction to the prayer song grant and the workshop to be offered at our presbytery meeting the following week. On March 29, participants from many churches in our presbytery, attending on site and by Zoom, took part in that workshop.

Designed as a “progress report” on the grant, I shared the history of the project and how some of the songs were currently being used in worship and pastoral care. Everyone received preliminary song sheets and learned and sang about 10 of these songs together.

Afterwards we offered visions for next steps and how the project could reach out to their particular churches’ communities. Valuable feedback was shared such as: “We don’t have an organist at our church. We would love to receive a CD or flash drive of the accompaniment with the song sheets so we could use them in our worship.”

It was wonderful to be singing together, sharing some of the songs with pastors, congregants and musicians from churches around our presbytery and receiving valuable feedback. Disappointments included technical difficulties with Zoom as we were running three Zoom meetings at the same time from the meeting location.

Sharing the singing with participants on Zoom was not what we hoped, and one of the artist partners who has written many of the songs was unable to join the workshop on Zoom from his home in Wisconsin. I did feel, though, as a “quarterly report” and initial outreach, it was soulful and successful providing inspiration and direction.

Although I look forward to having more time to devote to working with partners on the project during the summer, I was happy with the preliminary progress and outreach the presbytery events provided. To date, the places the prayer songs have been used recently include funerals, day care centers and during hospital and senior residence visits.

For more information on grants that are available from the Synod of the Trinity, click here.