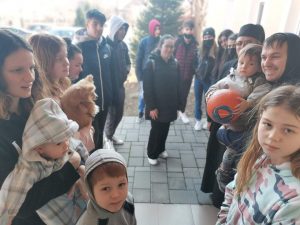 Ukrainian refugees await food and supplies from organizations like the Reformed Church of Romania, which is on the ground and assisting thanks to support it is receiving from American entities like Lehigh Presbytery.

Nearly 30 years ago, Jack Ferlino was asked by Lehigh Presbytery to help organize a Worldwide Ministries Care Team in an effort to connect with churches and other partners around the world. Feeling called to this work, Jack quickly accepted. In a matter of a few short years, he and the team had created a relationship with the Hungarian Reformed Church of Romania for the purpose of sharing resources with one another.

Since that bond was formed in 1997, Jack and others from the presbytery have traveled to Romania more than a dozen times, creating a stronger bond with each overseas trip. It was so meaningful to Jack that he created a Permanent Endowment Fund with the Presbyterian Foundation to support the two districts of the Reformed Church in Romania through the World Communion of Reformed Churches, with the support of the Rev. Ellie Johns-Kelley, a Ministry Relations Officer for the Presbyterian Foundation.

Fast forward to 2022 and Russia’s decision to invade Ukraine has caused refugees to scatter into nearby countries such as Romania. It has put an urgent and taxing strain on many different entities, especially religious organizations that are looking to do their part to assist those trying to escape the war in their homelands.

“They have sent pictures and requests for help,” said the Rev. Nicki Vogel, the vice moderator at Lehigh Presbytery who has also been an integral part of the presbytery’s current relationship with the Romanian Church. “When you know the people, it makes it harder to not want to help. We all see the pictures that are all over the internet and news, and they’re heartbreaking. I think it’s a different kind of heartbreak when you have a connection.”

Jack’s bond with Romania and the Hungarian Reformed Church in that country is deep. It stems back 25 years when he was asked by Presbyterian pastor and then Lafayette College Professor of Religion Dr. Earl Pope to accompany him to Romania. It left a lasting impression on Jack.

“They had recently recovered from the revolution and the church was in the beginning stages of trying to rebuild itself,” recalled Jack, who is now 101 years old. “There was a great deal of division in the country. One of the purposes of our visit was to establish a seminar on reconciliation, which we did in 1999. The object was to bring together people who were divided by the communist party during the revolution.”

The week-long gathering brought together 90 students from many different religious denominations. From there, attempts were made to establish church-to-church relationships between the congregations in Romania and ones in Lehigh Presbytery to create a cultural understanding between those that were participating in the partnership. That’s when Lehigh’s Worldwide Ministries Care Team was born.

“The presbytery committee was established as a committee to help the churches in the presbytery develop their own church-to-church relationships,” Jack said. 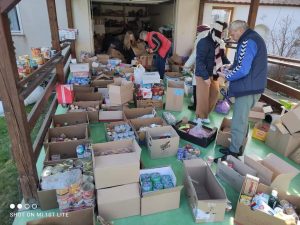 Basic foods, laundry detergent and medical supplies are in high demand in countries that are taking in Ukrainian refugees. Giving from Lehigh Presbytery is helping to purchase some of these items.

Jack’s involvement with Romania and the church there continued to grow over the years. When his wife Miriam passed away in 2021, he set up the Permanent Endowment Fund through the Presbyterian Foundation that included memorial contributions in her memory as well as funds from Jack and his communications company Vistacom Inc. for an initial contribution of $100,000. Annual income from the fund is earmarked to support Diaconia, a ministry of the Hungarian Reformed Church in Romania that assists with shut-ins, those with illnesses and orphanages.

Fast forward to today and because of the war in Ukraine, countries like Romania are now being asked to house Ukrainian refugees who are escaping the war in their homelands. The Hungarian Church in Romania is one of many religious organizations that is actively involved in this ongoing refugee situation.

“The Hungarian Reformed Church of Romania has a working relationship with the Transcarpathian Church in Ukraine,” Jack explained. “There are millions of Hungarians in Ukraine, which is not well known to the world. We are supporting the people in Romania through the Hungarian Church because they have a direct relationship with the Transcarpathian Church. We have been sending funds to the church in Romania and they are in direct connection with the folks in Ukraine. The churches in Romania are bringing in the refugees and housing them.

“We’re still raising funds for the folks in Ukraine. We’re in daily communication with the church as to what activities they’re doing to help with the refugees.”

The presbytery’s Worldwide Ministries Team asked Nicki to sit in on its conversation about ways it can assist the Ukrainian refugees in Romania with the hope that she would bring the matter to the presbytery. She did, and it was decided that Lehigh would set up a fund where the presbytery would match donations – from both individuals and churches – up to $5,000 toward the humanitarian response to the war in Ukraine.

“When it comes to helping, our presbytery’s churches tend to step up in that regard,” Nicki said with praise.

“One of the other leaders said the younger ones today want to see and know where their money is going,” Nicki continued. “They just don’t want to give to some denomination. They want to see what their money did and so that’s why we went ahead and asked them for ways to respond so that we can show those younger generations that are willing to give more if they can see the fruits of their labor.” 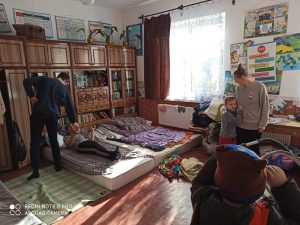 Many homes in countries like Romania have turned into shelters for Ukrainians seeking a safe place to live during a war that is destroying their homelands.

As of early May, Lehigh Presbytery had sent more than $17,000 in contributions to the Hungarian Church in Romania. Part of that giving came from Adamsville Presbyterian Church in western Pennsylvania that is ministered by the Rev. Harry Johns III, the father of Foundation member Ellie Johns-Kelley, who had told him about Lehigh’s outreach. The small, 60-member church dug deep and raised $2,500 to give to Lehigh to supplement the presbytery’s efforts.

“The Presbyterian Foundation is honored to support Lehigh Presbytery’s long-term partnership with Transylvanian and Kiralyhagomelle Reformed Church Districts in both their immediate response to the war in Ukraine by offering online giving to the presbytery, along with their perpetual witness by stewarding the Jack and Miriam Ferlino Charitable Fund of the Reformed Church in Romania,” Ellie said.

The funds are being used to purchase supplies to assist the mothers and young children who comprise most of the Ukrainians fleeing out of their country. Things like diapers and sanitary wipes are in high demand for these refugees, as well as basic foods, laundry detergent and medical supplies. A portion of the money was also forwarded to a Hungarian church that is housing some refugees.

Additionally, truckloads of supplies have also been taken to Ukraine for the Transcarpathian District of the Hungarian Reformed Church in Romania to disperse to those left behind in the war zone. Those basic supplies like baby and adult diapers, formula and laundry detergent are being delivered.

“It’s a matter of caring for our brothers and sisters in other countries,” Nicki said of Lehigh’s outpouring of support. “Our goal is to do whatever we can to help with that care and meet the needs of God’s people in their difficult times, whatever that looks like.

“These people are innocent and are suffering from the evil in our world. How can we use our already existing partnership to help them? I want to help these people and how do we do that in a most efficient way?”

Nicki has also leaned on friend Ellen Smith, a mission co-worker for the Presbyterian Church (U.S.A.) who serves as a regional liaison for Central and Eastern Europe, during this time. Ellen, who was on the ground in Romania and other countries shortly after the war broke out, spoke to the presbytery about the need in that region, giving them a personal and first-hand account of what is really needed there. Ellen also was able to connect Lehigh’s Worldwide Ministries Team with Presbyterian Disaster Assistance, which is working with ecumenical partners that are dealing with the humanitarian crisis in countries bordering Ukraine, to make sure the donations from Lehigh are going to places where the need is great.

While the $5,000 match has been met, Lehigh Presbytery continues to keep the fund open so that individuals and churches in its region can continue to donate to support the work that is occurring in Romania. It’s an effort to not only help its brothers and sisters but also strengthen the Lehigh bond with the Romanian Church.

“I think this is causing a renewal and deepening of this relationship with the presbytery,” Nicki said.

The generosity shown has brought a shining light to what is otherwise a dark scar on a terrible situation affecting those in Ukraine and the surrounding countries.

“One of the things that always stands out to me is Mister Rogers’ mother’s advice, which is looking for the helpers because that is where God is,” Nicki concluded. “There is a lot of evidence of this. We looked for where the helpers were and helped the helpers because that’s where God is. God is not in the war. God is not in the evil that is taking place. God is in those who are offering the care. God is in all of the love that is spread during these difficult and struggling times. When we look for God, we see God in those people who are helping.” 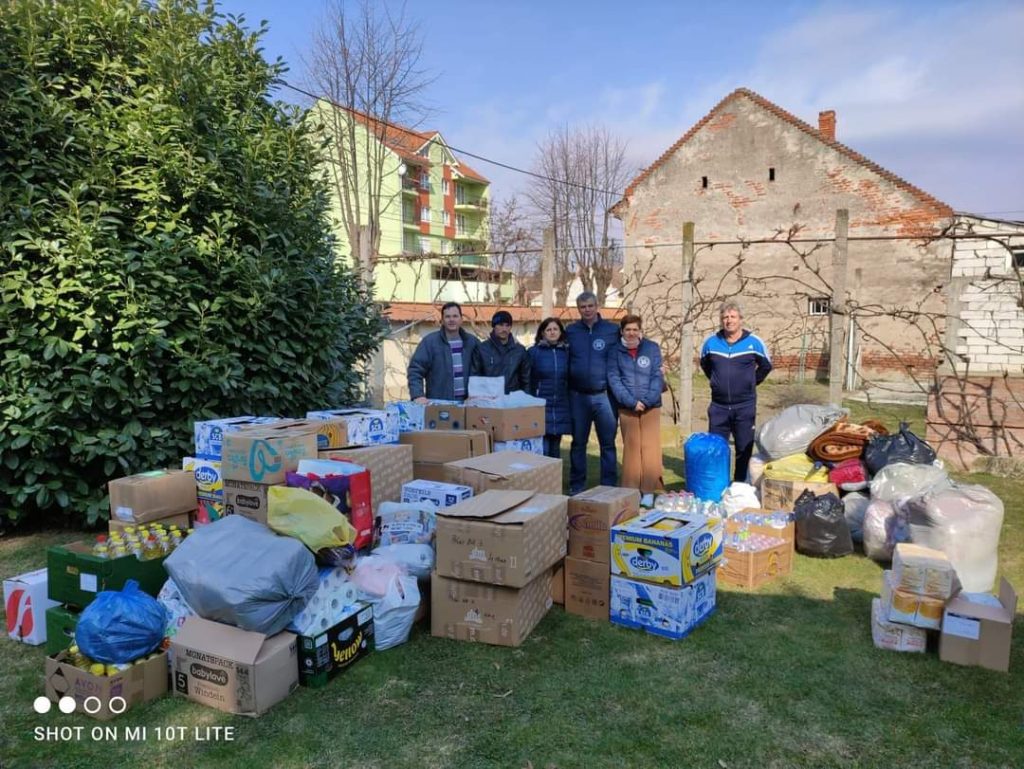 Volunteers wait to load food and supplies into a van that will be taken to aid Ukrainian refugees. Many of these items were purchased using donated funds that were sent by Lehigh Presbytery.