Calvary PC benefits from those moving ‘across the lawn’

On a football field, three yards can make a big difference in the outcome of a game. On appropriately-named Church Street in Indiana, PA, that same nine feet are all that separate two Presbyterian churches with widely-different histories. And a new chapter in the congregations’ memoirs has been written during the past 12-plus months, adding to the uniqueness of the situation. 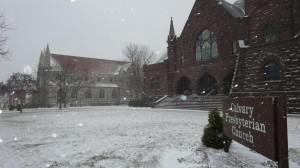 That decision and the way Graystone went about changing its affiliation didn’t sit well with 200-plus people at Graystone, so they walked. Nearly 150 of them didn’t go far, about three yards to be exact. That group is now a vital part of Calvary Presbyterian Church, becoming an integral part there through both congregational leadership and mission opportunities. For Calvary PC’s pastor, the Rev. David Hanna, he’s just thankful his congregation was in the right position to offer a welcoming hand.

“This new group has helped us live out our ministry of hospitality and expand this ministry in new ways,” he said. “This is a gift and a miracle. The church has awakened to new ministry possibilities. I’m not thankful for the circumstances. In fact, it saddens me that we, the church – the place of grace and love – can hurt and fracture the family of faith. So, I’m not thankful for these circumstances, but I’m thankful because I see a Calvary that has moved from strength to greater strength with God’s guiding help. It’s exciting to begin to imagine what we can do together – Calvary folks one and all.”

Among the places where the presence of the new worshipers is being felt are in strengthening things like missions in Rwanda, the CROP Hunger Walk and work with the poor. It’s been a blessing in disguise for Hanna and his congregation, which has adopted the slogan “Many Voices United In One Spirit,” something that is more evident now than ever at Calvary PC.

“This group which has joined Calvary added more voices to our many voices while lifting up our common foundation of faith in Christ and our shared love for one another,” Hanna said. “The people who came over the lawn are not strangers to us. They are our neighbors and friends with whom we have worked beside in community service, in mission and ministry through the presbytery. They are not strangers to us. They simply, wonderfully expanded our family of faith. They are very committed to the church and its work. They have already engaged in the leadership and ministry of the church at every level.”

Rudy Steffish, a member for eight years at Graystone before leaving there two years ago, feels the transition has gone very smoothly.

“We kind of melded into Calvary,” said Steffish, who is currently on the Board of Deacons at Calvary. “Our purpose wasn’t to overtake it or try to create Graystone II. We just kind of wanted to fit in, and we were very welcomed by the existing congregation. … It’s just been a creation of something incredible.” 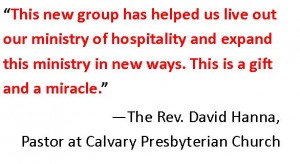 Also among those who have moved from Graystone to Calvary is the Rev. Dick Cassel, who was an associate minister and eventually the head minister at Graystone for 20 years until 1987. Cassel, now the Parish Associate at Calvary, decided to leave Graystone in May of 2012 because he was concerned with how Graystone was approaching the changes proposed by the PCUSA.

Cassel, who at the time said he was taking a “temporary leave of absence,” admitted that Calvary was dealing with the situation differently.

“This was not on Calvary’s radar,” Cassel said. “They see the Gospel as primarily a positive proclamation of God’s love for everyone in Jesus Christ, rather than a negative list of prohibitions. They may hold different positions on those hot-button issues, but they aren’t things to divide over.”

In Steffish’s eyes, the situation has formed something even stronger at Calvary, something he hopes will spill over into the rest of the PCUSA.

“We need to cut strings,” Steffish said. “We can build a stronger denomination if we let those who want to leave go.”

Having worshipers go from one congregation to another isn’t a new thing on Church Street in Indiana. Calvary was started in 1807, one year before Graystone, and over the last 200 years there has been plenty of switching between the worshiping communities.

“There has been movement back and forth between these churches forever,” Cassel said. “People run across the lawn depending on what’s happening in one place or another. In some ways I think now it’s a healthier situation with two denominations side by side.”

Cassel said when he was ministering at Graystone, the congregation was known for its diversity. In recent years, he added, the leadership has become “like-minded,” and that is what caused the exodus of the 200-plus worshipers at Graystone. 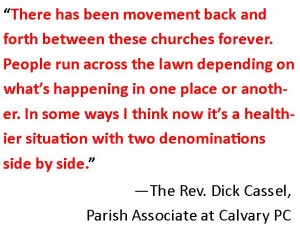 “The issue for many is not what denomination they’re members of,” Cassel said. “And many are not especially liberal on same-sex issues.  But they believe the Gospel is broader than one or two controversial issues.”

Of the 150 that left Graystone for Calvary, about 125 of them became members there within eight months, taking Calvary’s membership total to well over 400.

“For a smaller church like ours, it was quite an increase in a very short period of time,” Hanna admitted. “What Calvary discovered was not just the gift of hospitality but how to live out that ministry, which mirrors God’s expanding love for us. That’s God’s doing.”

Seeing what was happening, the Presbytery of Kiskiminetas quickly expanded the number of ruling elders for Calvary, enabling some of the congregation’s new members to immediately fill roles of leadership similar to ones they held with Graystone.

“Hospitality is not just a word to say,” Hanna said. “Decisions were made and actions were taken immediately because hospitality is a ministry to do.”

Many of the ex-Graystone worshipers who have moved to Calvary are active in the church, and that new energy has created a spark at Calvary.

“The folks that came here are the church-goers. Church is a part of the weekly and daily fabric of their lives,” Hanna said. “They’re a part of the engine of the church. They are helping enliven Calvary. We’re able to expand our ministry and our mission in new ways because of the gifts of leadership and resources which they brought with them.”

Cassel agreed that the Graystone transplants have created a unique situation at Calvary.

“Those were 150 active people,” he said. “Unfortunately, they’re also 150 older people for the most part. They’re not a lot of young families. … These were our active people. Calvary’s worship attendance has doubled in the last two years. There is a new spirit there. And Calvary has been amazingly open and welcome. It’s not easy for a church to all of a sudden double in size.”

There are also roughly 100 or so people who left Graystone and went to other denominations or are not attending a church anywhere. That now unchurched number is also worrisome for Hanna.

“My ongoing concern is that there is a group of people that have been de-churched, that aren’t going to any church any longer because of what has happened, and that’s a concern,” he said.

Graystone’s conservative stance is the main reason people left its pews, but there was another underlying factor as well. 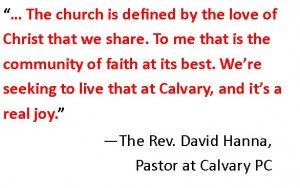 “In large part, as I understand it, people left due to how the whole thing was handled in terms of how to do church and how to be church, especially when going through a difficult process,” Hanna said. “Many people felt it was mishandled by the leadership of the church.”

With Calvary having names on its rolls that not too long ago were a vital part of Graystone’s membership, it could make for a strained relationship between the two congregations. Hanna said that is not necessarily the case, but that there is some “hurt” there.

“The way we connect is through mission, and we continue to do that,” he said. “We do ministry together and mission together. … There are neighbors and friends and even family members who are still between these two churches. We’re not just talking about two churches, but it’s part of the small community here.”

“Community” is what church is about. Helping those in need is a fundamental part of Christianity, and it’s what the people at Calvary Presbyterian Church are doing these days, starting with giving their neighbors who worshiped three yards away a new place to gather and share their gifts and talents.

“We continue to learn through this season of change about what it means to be the church,” Hanna said. “It’s not defined by who we are by the sides that we take, the church is defined by the love of Christ that we share. To me that is the community of faith at its best. We’re seeking to live that at Calvary, and it’s a real joy.”