There are no days and nights there. The workers start long before sunrise and go underground for the next 10-12 hours just to bring home a paycheck that is sometimes less than minimum wage. And the work is backbreaking and unhealthy. Bent over most of the day with minimal light being supplied by a few light bulbs, the workers constantly have their hands in compost and are subjected to extremely high levels of mold.

Above ground, things aren’t much better. Some of the workers live in trailers on the employer’s property, housing that also consists of more unhealthy levels of mold because the homes are located in the vicinity of steaming piles of compost. And the stench can be smelled for miles. 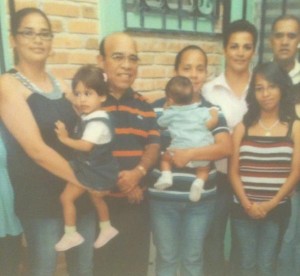 Rev. Nering Huete stands with a group of immigrants he has helped stay on their feet while the family works on mushroom farms in the Kennett (PA) area.

Inside the trailer, with the mother working the long hours to support her family, a 12-year-old daughter is left to care for her two younger siblings. Because of that daily pressure, the daughter becomes so distressed with taking care of her younger family members that she tries to cut herself and has to be hospitalized.

It’s an all-too-real scene that’s being played out for Guatemalan immigrant families in the United States these days. While one might think these images are coming from areas like Miami or San Jose or New York, they’re not. They’re the everyday lives of mushroom workers who live near Kennett Square in Chester County, PA.

The Rev. Nering Huete (pronounced “Ooehte”) is one person who is trying to make a difference. The pastor of the Presbyterian Church for Hispanics, known as La Iglesia, in nearby Toughkenamon (Presbytery of Donegal) has taken it upon himself and his congregation to aid the families working at the mushroom farms. Specifically, they are helping immigrant children who are coming into the U.S. to connect with their working mothers and fathers. Huete is in turn spending his time and money navigating the children through the legal system, traveling regularly into Philadelphia for hearings in what has become a new ministry at La Iglesia.

“Most of the children are coming from Honduras and Guatemala,” Huete said through a translator, the Rev. David Dickey, a Presbytery of Donegal liaison to La Iglesia. “Contrary to the public’s perception, they have come seeking out family members who are already living in this country. Most come seeking the kind of life they see portrayed in television and in the movies. But when they get here, they find themselves often living in very difficult situations. Where at home they could ride the bus for a few pennies, here they are often isolated on farms or in communities where access to food and public services is unavailable. Nonetheless, they are happy to be re-united with family members.”

Due to weekly required check-ins with their case officers, Huete has been driving the immigrant families to Philadelphia on a regular basis. For six months from May to October, Huete made 21 trips to Philly for weekly reporting and to seek resources for future legal proceedings. Huete lives in Lancaster, so for him to pick up the families in Kennett and drive them to Philadelphia, it’s roughly a 120-mile round trip. Not only are gas and parking costs factored into the trips, but Huete also springs for breakfast in order to give the families a hot meal. All told, Huete figured he spent over $1,700 out of his own pocket in just half a year to help provide for the immigrants.

“I felt this was something God called me to do, and I could not refuse, even though I have been struggling financially and could not afford the gas or other expenses that were necessary to fulfill this role,” Huete said.

All told, there are seven people under his care, with four of them in the 16-18 age range, two more in their mid-20s and one other at age 52, all of whom would be on their way to being deported if not for the help they are receiving from Huete and La Iglesia.

“For now, the influx of minors has ceased,” Huete explained. “I understand that as yet there are some 60 cases in safe houses in Arizona awaiting a reunion with their families in different parts of the USA. The visit of presidents from three countries with Obama has helped establish mutual agreements. I do not know what those agreements are, but for now there is cooperation between the immigration authorities at the borders with Honduras, Guatemala and El Salvador to detain everyone that they apprehend on the road. Many are detained at the borders and now do not succeed in arriving at the Mexican border.

“In all cases, there is a process of deportation that is on-going, especially of boys who do not have any reason to justify staying. It is only a matter of time. When adults (18 and over) arrive, there is no recourse but deportation. This will be a very painful situation for them because the majority are heads of households or family member who believe that for now they are safe.

“In the case of the women, it is different. The lawyers use the petition for asylum in cases of rape or physical abuse at the border or in their country of origin in order to present their case before the judge, and in that way, they can forestall the deportation process. This is true of one of the young women. Dr. Dickey is helping with her case. As a pastoral counselor, he will soon meet with her to assess her for PTSD as a result of alleged rape and physical violence.” 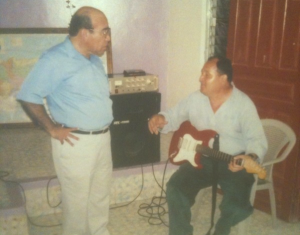 Rev. Nering Huete (standing) talks with a musician from his church, La Iglesia.

What’s going on below the surface is equally deplorable. Mushrooms are grown year-round in dark, damp places that are underground. Starting at 3 or 4 a.m., workers are bent over most of the day preparing soil (reclaimed compost, which accounts for the high mold levels), planting spores and harvesting mushrooms from stacked trays that stretch the length of several football fields. When the workers get back to their trailers, there is more mold there, which comes from the piles of steaming compost that are lined up around the facility. The compost forms the basis of the soil in which the mushrooms are grown and lets off a smell that is unmistakable for miles around the Kennett area.

“After working nights and days in the mushroom factories to pay their debts, the owners of the mushroom companies take advantage of their circumstances, paying less than minimum wage and making them work 10-12 hours a day,” Huete said.

The children do attend school and take English as a Second Language classes. But when they get older, they’ll most likely end up underground in the mushroom caves. That is, if they’re not deported first.

“If I didn’t help, I believe someone would do it,” Huete said, “but the families would have to pay thousands of dollars, and we all know that especially here, nothing is for free. Between them, families and friends from work would collect whatever money would be necessary to help get them out of their problems.”

So with people in need, Huete has stepped up and answered the call. It’s something he’s associated with in the Toughkenamon area.

“He is known by many in the community as a caring person who can be relied upon to go above and beyond the call of duty to help the Spanish-speaking community,” Dickey said of Huete. “He regularly takes his parishioners and others in the community for doctor’s visits and personally drives the bus that brings many to church on Sundays who would not otherwise be able to attend.  He is not only a pastor but functions in effect as a community social worker.”

At the Synod of the Trinity assembly meeting in October, money given during an offering was presented to Huete to help cover a fraction of his costs for this mission. Additional funds can be directed to La Iglesia Presbiteriana de Toughkenamon at 147 Church St., P.O. Box 59, Toughkenamon, PA 19374. Money can also be donated to La Iglesia through the Presbyterian Mission Exchange here.