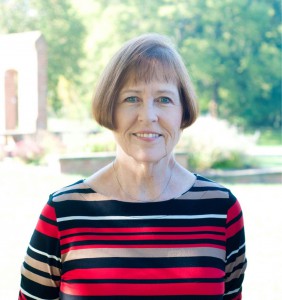 Candace Hill received the Association of Presbyterian Church Educator’s Life Achievement award at the national gathering in February one year after being honored by the East Region of APCE with its Educator of the Year award.

Candace Hill’s favorite passage in the Bible comes from Jeremiah 29:11. It reads, “‘I know the plans I have for you,’ says the Lord, ‘plans for good and not harm, that you may have a future with hope.’” It’s a fitting scripture for someone who started out with little intention of being a Christian educator but who kept hearing the call and eventually found herself working in that field at the national level of the Presbyterian Church (U.S.A.).

“It’s so very true in my life, even through the ups and downs,” she said of the verse.

Candace’s journey was recently honored by the Association of Presbyterian Church Educators, both at the national and regional level. Last year, the Texas native was named the Educator of the Year by the East Region of APCE. Less than 12 months later, she was honored with the Life Achievement award at the national educators’ gathering.

Candace is certainly deserving of the accolades. While not an ordained minister, Candace has worked at both large and small congregations while also serving the national church in Louisville as the PC(USA)’s associate for the POINT (Presbyterians Organized in Nurture and Teaching) network and later the coordinator of Educational Ministries.

“It’s been very touching and very humbling to be among these very gifted, talented people,” Candace admitted. “I started just as a person from the pew. I’m not ordained; I’m an elder – I did not go to seminary.”

Candace began her journey working in the public-school system in Texas. She then moved onto Christian education, first as a volunteer home-visitor coordinator and then as the director for preschool ministry at a 5,000-member Baptist church. She planned to go back to be a classroom teacher when she moved to Pennsylvania in the mid-1980s but soon found herself working as a preschool teacher at the First Presbyterian Church of Murrysville, PA, before becoming the director of Christian Education there a short time later.

“I was in the classroom, but then when my children were young, I really felt called to church education,” Candace said. “I started very part-time in another denomination, so I was coordinating the Sunday school and ministries with preschool families for the church. Then when I moved to Murrysville, I started working at a Presbyterian preschool at First Murrysville. They started a position about a year later for a director of Christian education. The pastor (Jack Hodges) remembered my resume and that I had some experience in church education and asked me if I wanted to apply. And that’s the way it started.”

It was Jack who Candace credits as being a person in her life who steered her in the direction of Christian education and eventually APCE.

“He was a wonderful mentor,” Candace said. “I was very part-time at first. I was a single mom. He immediately sent me to East Region (of APCE). Then he sent me to national APCE, paid my way and he and his wife kept my children. He was really connected to the denomination and to the Association of Presbyterian Church Educators. I really credit Jack for teaching me how to be a Presbyterian.”

Candace transitioned to an advocate for Presbyterian Reformed Educational Ministries at the Presbytery of Redstone before moving to Pittsburgh and becoming the director of Children’s Ministry at Fox Chapel Presbyterian Church. She remained active at the presbytery level there, too, serving as an education advocate. She would later meet her pastor-husband, Scott, and the two would move to Illinois where Candace would continue in presbytery work with the Christian Education and Spiritual Nurture committees, among others. 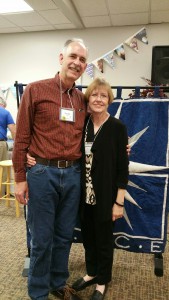 Candace Hill stands with her husband, Scott, after receiving the Educator of the Year award at the East Region of APCE in 2018.

It was in Illinois that she also became involved in the POINT network. It led to a call with the national church in Louisville where she also became a Certified Associate Christian Educator in 2007. She worked nearly a decade with the Presbyterian Church (U.S.A.) before retiring and returning to the Pittsburgh area, settling in at Aspinwall Presbyterian Church where Scott is the pastor.

“I trained volunteers across the country to help little churches with their education programs,” Candace said of her time in Louisville with the national church. “Most of our churches are under 150 members and they don’t have staff. We helped them choose materials and train their volunteers. I went around teaching mostly teaching workshops and interpreting materials.”

It’s that teaching component that fuels the fire that Candace has.

“I don’t believe you can have faith without community,” she said. “I think it’s in our DNA that we learn from one another and when we have our ups and downs, people can speak from their experiences and how God has put faith in their lives that hold us up in times when we feel estranged or can’t go any further. We hold each other accountable in our faith journey.”

Today in the Aspinwall community, Candace isn’t involved with as much Christian education as she used to be, but that has freed her up to do other work. She transports church members to and from doctor’s appointments in what she calls “a ministry of presence” and is currently involved with Meals on Wheels and 10,000 Villages fair trade. She has also started a Dolly Parton Imagination Library affiliate, which is a free book gifting for newborns to 5-year-olds that provides 60 free books to families for those first years of a child’s life.

“They didn’t have one in Allegheny County,” Candace said. “An anonymous donor took me up on it. We have 119 children enrolled. It’s a literacy program that gives a book a month to a child – it’s mailed to their home in their name for free.”

Candace still has plenty of work to do with the national APCE group. In 2021, the organization will celebrate its 50th anniversary and Candace has been asked to be a co-chair of one of the planning teams for that event in Chicago. Prior to that, next year’s event in Little Rock, AR, will feature discussions revolving around justice, recreation and intergenerational ministry, trying to get churches to think about things beyond their buildings’ walls.

Candace is happy to continue to give back to APCE because she knows how much the organization has given to her. She remembers an early regional APCE gathering she attended where she wrote her most difficult problem on a postcard. For Candace, being a new Christian educator, she listed “Working with youth.” The cards were then passed around the room, and by the time she left, she had 15 new ideas with which to use. It led a strong connection between Candace and APCE that continues today.

“The four values of APCE are connect, enrich, empower and sustain,” Candace said. “I think those four words say it all. I think that’s what we do when we’re part of a faith community and part of an organization like the Christian Educators Association. We connect with one another, we share ideas, we’re very generous in spirit.”