Traveling ‘pastorist’ helps churches connect with their art side 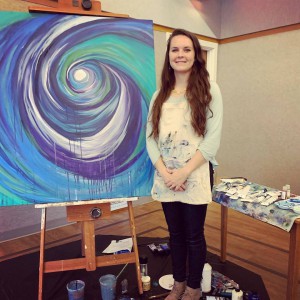 Lisle Gwynn Garrity stands next to the painting she created during the Presbytery of Carlisle meeting’s opening worship.

Helping churches uncover their artistic talent is what the Presbyterian pastor from Black Mountain, NC, does as her ministry. Traveling the country, Lisle’s goal is to make people feel more comfortable with their art abilities, which can then be used in a church setting to help spread the word of God.

There’s a reason not everyone feels comfortable creating works of art, Lisle explained. There was a time in everyone’s life when they were young that they were either praised for their artwork or were advised to try something else, she said.

“When you’re born, you start creating things with blocks and crayons and clay,” Lisle said. “When you get to grade school, what you create is attached to some sort of value. You receive feedback good or bad. Then you start to do creative work you’re good at and stop what you’re not good at.”

“It’s an act of visual contemplation using images for meditation and prayer,” she explained. “We do that to try to inspire people to pay attention, to look at things in new ways, and to open ourselves to the ways that God might be speaking to us through images.” 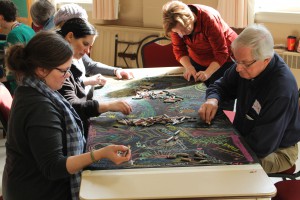 Workshop attenders draw on a black canvas after hearing the parable of the fig tree.

Later, canvas and pastel crayons were put on tables for groups to begin coloring what they were picturing following the reading of the parable of the fig tree. In silence, each person began coloring on the black fabric, then moved to their left to add to drawings that were done by the previous person sitting there. This is called “creatio divina.”

“I hope it’s a really inclusive and welcoming way to invite people into creativity, especially if they’re having a lot of anxiety about it,” Lisle continued.

When Lisle asked those in the workshop what the exercise was teaching them about being the church, one comment was that it demonstrated how congregations should start something and then invite others to join in. That’s the type of connection Lisle is trying to make through these activities.

The afternoon session featured attendees creating large-scale liturgical banners that could be displayed in their churches. Tuesday morning at the Presbytery of Carlisle meeting at Derry Presbyterian Church in Hershey, PA, Lisle painted her own large banner while drawing inspiration from the worship leader. It was followed by a workshop on exploring creative opportunities for Lent.

Lisle, who calls herself a pastorist (a mix between a pastor and artist), approaches her work as an artist primarily through the lenses of pastor and theologian. She serves as an artist-in-residence during her visits and creates multi-media resources for worshiping communities.

“My hope when I come into spaces for a retreat is that I can instigate and empower creativity to be expressed in churches and congregations,” she said. 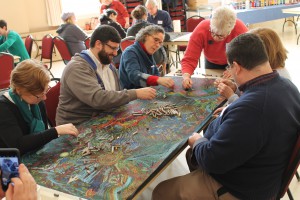 “Creatio divina” was on full display at Mechanicsburg Presbyterian Church when a group of people began drawing, then moved to their left to continue someone else’s creativity.

One aspect of Lisle’s work is to help people in churches produce banners and other resources for liturgical holidays. She admits that the actual construction of those decorations is the easy part of the ministry.

“The hard part is trying to instigate people’s creativity and empower them to feel confident enough to share it and explore it,” Lisle said. “It’s about, how can we inspire people to come together and feel like they can come and collaborate and create something new season after season?”

Lisle, who travels on average twice a month for workshops around the country, also runs a ministry called “A Sanctified Art” where she works with a team of artists to create digital resources for churches. Lisle will often turn to famed author Brene Brown for words to help tie everything together, and that was the case at Mechanicsburg Presbyterian Church on this Monday morning.

“‘Creativity is the way things travel from head to heart to hands,’” Lisle said, quoting Brene. “Unused creativity is dangerous. It changes into things. It’s not benign.’